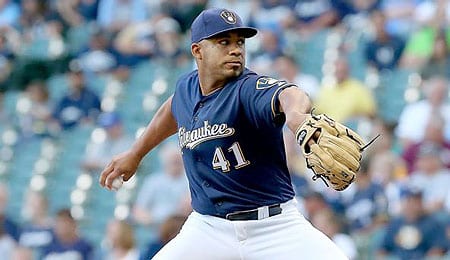 A healthy Junior Guerra could help your rotation. (ESPN.com)

Welcome back to another week of Fantasy baseball. Now that we’re into late-May, you’ve got a fairly good idea of whether you’re in it this season. So milk that waiver wire for all it is worth!

This week, beloved Dodger great Tommy Lasorda has been hospitalized, and it’s unclear how the 89-year-old is doing; Mets manager Terry Collins admitted that he considered intentionally walking Mike Trout with the bases loaded on Saturday; and Atlanta has made a deal to bring in Matt Adams to fill in for Freddie Freeman (wrist).

Junior Guerra, SP, Milwaukee Brewers (ESPN: 6.4 per cent; CBS: 42 per cent): After hurting his calf on Opening Day, Guerra is almost done his rehab, with his next start moving to Triple-A. He was expected to miss six weeks, so the injury is dragging a tad, but we started hearing about his progress two weeks ago (see video below) and you’ve still got an opportunity to add him before the hype machine has him flying off the wire. Don’t forget that as a rookie last year, Guerra spent two-thirds of the season in the Brewer rotation and enjoyed a surprisingly good ERA while only experiencing a slight boost in his homer rate over Triple-A.

Freddy Galvis, SS, Philadelphia Phillies (ESPN: 23.1 per cent; CBS: 42 per cent): Galvis has again improved his offensive game this season and top prospect J.P. Crawford isn’t exactly pushing him out of the job with his lacklustre performance at Triple-A. So Galvis continues to gobble up the majority of action at shortstop in Philly, proving very durable for a middle infielder. His BABIP is a tad on the low side, so there’s a slight possibility of growth in his BA by season’s end.

James Farris, RP, Colorado Rockies (ESPN: unowned; CBS: unowned): Acquired from the Cubs in the Eddie Butler trade, Farris is putting up some very impressive numbers as a closer in Double-A. Farris has clearly mastered this level now (judging by that sweet ERA), and it’s time for a promotion to either Triple-A or even the bigs. As always, the usual caveat about Colorado pitchers applies here, but Farris has put himself on the map as someone to watch in keeper leagues.

Trevor Plouffe, 3B, Oakland Athletics (ESPN: 2.8 per cent; CBS: 15 per cent): Plouffe’s walk rate dipped in an injury plagued 2016, but the move to Oakland has inspired some Moneyball like effects from him as his walk rate has soared to a career best after drawing a pair of free passes Saturday. Unfortunately, his strikeout rate has also spiked, but even so, he’s seen a slight increase in his batting eye. And given his recent hot play (.350 over the last week), we think Plouffe makes for a decent pickup in an AL-only league or a deeper mixed format.

Erasmo Ramirez, RP, Tampa Bay Rays (ESPN: 2.6 per cent; CBS: 8 per cent): Ramirez may not be inducing infield flies at his normal rate, but his K/BB rate is superb and — given a chance to start on Friday, he once again teased us with his talent, which he is wont to do from time to time. Ramirez’s HR/FB ratio is better than usual this season, and that’s likely to correct itself, but if you need a starter, you may want to give him a long look.

Mike Clevinger, SP, Cleveland Indians (ESPN: 5.4 per cent; CBS: 16 per cent): Clevinger is getting more ground balls than fly balls so far this season and it’s working for him. Saturday, he took a no-hitter into the seventh inning against Houston and he’s now been scored on just once in his four appearances. It’s worth picking up Clevinger to see if this is for real.

Matt Adams, 1B, Atlanta Braves (ESPN: 2.3 per cent; CBS: 9 per cent): As mentioned above, Adams has been traded to Atlanta, where he’ll fill in for the injured Freeman for the next couple of months. Yes, Adams in the outfield is a serious adventure, so finding consistent at-bats for him has been challenging for the Cards. Now he’ll get a chance to play pretty much every day, providing a nice boost for a guy that is actually getting on base more often than ever so far this season.

Jake Junis, SP, Kansas City Royals (ESPN: unowned; CBS: unowned): Junis has been recalled to make his first MLB start on Sunday. Depending on how he does, this may not just be a temporary stay, especially with Nate Karns possibly DL bound.

Connor Joe, OF, Pittsburgh Pirates (ESPN: NA; CBS: unowned): A first round compensation pick in 2014, Joe is a solid contact hitter, but with very little speed. He’s enjoying a breakout season at Double-A, so could force his way into the picture in Pittsburgh soon.

Adrian Sanchez, 3B, Washington Nationals (ESPN: unowned; CBS: unowned): This Venezuelan switch-hitter fell off the Nats’ prospects list a few years back, but seems to be having a career renaissance this season, putting himself in position for his first ever promotion to the majors. Sanchez is getting long in the tooth for a prospect, but it wouldn’t be the first time a late bloomer burst onto the scene to provide value, so keep an eye on him.

Justin Smoak, 1B, Toronto Blue Jays (ESPN: 42 per cent; CBS: 47 per cent): Texas’ 2008 first round pick hasn’t exactly had the career most of us expected, but he’s enjoying his finest season at the age of 30 now that he’s back to playing full-time.

Yan Gomes, C, Cleveland Indians (ESPN: 3.8 per cent; CBS: 17 per cent): Gomes has really picked up his game recently. He’s clearly entrenched as the Indian starter and is nearly back to where he was in 2014.

By RotoRob
Tags: Junior Guerra, Milwaukee Brewers
This entry was posted on Sunday, May 21st, 2017 at 6:01 pm and is filed under BASEBALL, RotoRob, The Wire Troll. You can follow any responses to this entry through the RSS 2.0 feed. Both comments and pings are currently closed.