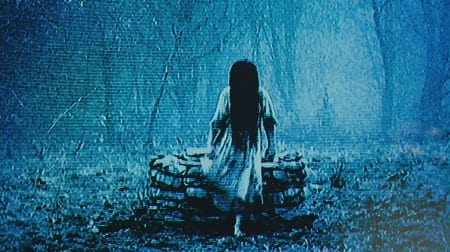 We have purchased hundreds of movies on Blu-ray and DVD over the years. Fewer than five of them are horror movies. One of those, however, is The Ring. It was an interesting story, unsettling and creepy without being grotesque, and it was well acted. The sequel, The Ring 2, was none of those things (with the exception of Naomi Watts), and was infamous for the laughable CGI deer scene.

For more than a decade it appeared that would be the series’ endpoint. Instead, it has been brought back in a sequel/reboot with Rings. We watched it. You know what comes next…

After an opening sequence that establishes, (a) Samara is still around, and (b) she can get to you no matter where you are, we follow Gabriel (Johnny Galecki), a college professor, as he pokes around a flea market. He ends up purchasing a VCR, and when he gets it home and starts trying to fix it he finds an unmarked tape inside. He plays it, thus starting the curse again.

As this is happening, Holt (Alex Roe) is heading off to college, leaving behind girlfriend Julia (Matilda Lutz). Following an abbreviated Skype session, Holt disappears. Concerned, Julia decides to drive up and try to locate him. She drops in on one of his classes, which is taught by Gabriel, who denies knowing Holt. Julia follows Gabriel and finds an elaborate research project is ongoing in which people copy the tape and have others watch it, thus insulating themselves from the curse.

Julia is approached by a woman named Skye (Aimee Teagarden), who claims to know where Holt is but must show Julia something first. Julia refuses to watch the tape just as Skye’s seven days are up, which summons Samara, who kills Skye. Holt then shows up and the two reunite, but with Holt running out of time Julia watches the tape. Now Julia is on the clock, but things are different this time, and they must find out why.

Tasked with adapting the series for a dramatically advanced technological age, tying it to the original and rekindling interest in the possibility of more films, Rings at least tries hard to implement a new thread and not purely recycle what worked in The Ring. Not everything works, but the angle of a hipster college professor that thinks he has found a doorway to “the other side” was clever.

Minus the reveal of Samara, Rings isn’t all that scary. Still, it resists the urge to play for jump scares and gory moments, sticking with the original’s use of disturbing imagery and the occult. Vincent D’Onofrio, fresh off his work as Kingpin in Netflix’s Daredevil, is suitably creepy as the preacher turned graveyard caretaker (always a fun combo).

Beyond the spectre of the unknown, what made The Ring work was the performance of its leads, particularly Watts. Here we’re stuck with relative unknowns Lutz and Roe as the primary characters and the known commodities (D’Onofrio and Galecki) in supporting roles. It doesn’t work. It probably doesn’t help that the film makes you think Lutz is still in high school, though one of the deleted scenes shows that is not the case.

It also feels forced. In The Ring, Watts has clear motivations and a skill set that fits the journey. Here, not so much. After Skye is killed — an event for which Julia is present and sees the aftermath of — Holt is fewer than 12 hours from his own horrific death. He insists Julia not watch lest she be marked and is so concerned about her and his own impending doom that he… goes to bed and leaves his laptop with the video easily accessible.

If you’re a stickler for continuity, Rings will drive you to distraction. It basically does away with much of the lore that was added in The Ring 2, and there are moments when you’re left thinking to yourself, “wait a minute, how did X happen?” or “how did Y get there?” There are plot holes aplenty.

There are nearly 20 minutes of deleted or extended scenes, including an alternate ending. Some of them are pointless, but the stuff with Julia and her mom, who appears to have suffered a breakdown after the death of her husband, should’ve been left in. Without that, our assumption was Holt (having graduated) was now headed to college, leaving his high-school age girlfriend behind rather than Julia staying to care for her distressed mother.

Beyond that, the remaining featurettes are typical promotional stuff in which they revisit the previous films and talk about the original’s cultural impact. An in-depth look at Samara is interesting in the sense that it shows the woman who plays her and her physical performance.

While Rings deserves some credit for trying to carve out its own niche, it never approaches the heights of the original because of its sometimes confusing plot and bland protagonists.

By HC Green
Tags: Blu-ray reviews, Movie Review, Rings, The Ring, The Ring 2
This entry was posted on Thursday, May 18th, 2017 at 4:04 am and is filed under Herija Green, Movie Reviews. You can follow any responses to this entry through the RSS 2.0 feed. Both comments and pings are currently closed.