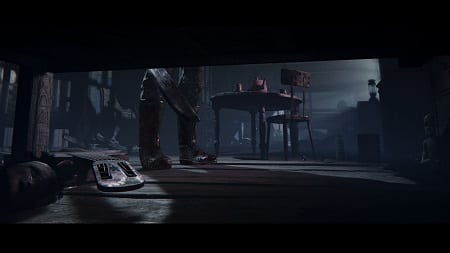 Hiding under the bed is never a good idea.

Outlast was a surprise hit back in 2013, and now the sequel has arrived to scare audiences again. That first title benefited from rather minimal competition, however. Can Outlast 2 still stand out from the crowd when so many other first-person horror games are crowding the market?

Outlast 2 controls pretty much identically to its predecessor. Players have access to a fairly limited toolkit with running and hiding being how encounters are dealt with. Most of the game is pitch black and so a handy camera and its night vision mode is needed to get anywhere.

Bandages can be collected for some healing once you’re free of immediate danger, though chances are if you’re getting hurt at all you’re probably dead.

While shrouded in nearly constant darkness, Outlast 2 is actually a fairly gorgeous game. Players won’t necessarily see that all the time, as scenes are too dark or flooded in night vision filters, but it’s an impressive effort for such a small developer.

There’s a wonderfully nasty atmosphere present throughout, with the creepy hillbilly coven often much more fertile ground for scares than the corridors of the first game.

Players will spend a lot of time in the silence, slowly creeping forward as the local foliage crunches under their feet while trying to avoid the crazy locals. The few times music kicks in it’s the usual shrill shrieks to accompany moments of danger, and they’re not particularly notable tracks. Voice acting is pretty good all around, with the villains standing out a lot more than the relatively bland heroes.

A crash occurs and our hero is separated from his wife and stranded in a hellish cult’s compound. They’re both journalists looking for the scoop on some mysterious disappearances and deaths in the area.

Not only is the game’s helicopter crash a bigger bang of an introduction, hostile enemies also end up appearing much quicker in Outlast 2. Sadly, the first enemy encounter is incredibly awkward.

She triggers before players can see her, and she’ll chase before you could even think of sneaking around or hiding. And so the main way to deal with this introductory encounter is to exploit the game’s pathing and resetting AI. This is a pretty incredible tension and immersion breaker.

Thankfully many of the other encounters are better designed. Enemies feel more common compared to the first game, which means less exploring and breaks from stress. This certainly increases the terror factor of the game, but it also can feel fairly tiring and cheap.

Mechanically, Outlast 2 is fairly similar. You’ll spend your time sneaking and cowering in closets or underneath beds in order to trick the variety of creepy stalkers coming your way. Your only tool is your video camera, which has a night vision feature that is essential to see anything during long stretches of the game.

Players will have to manage their battery resources though, and so choosing when to have your camera out is a tense balance to find. A new positional microphone is also present so players can tell which direction a sound is coming from, but it’s not used very often.

The story itself is only loosely tied to Outlast, and so this title makes a good entry point. Outlast 2 ramps up the violence and general nastiness quite a bit, however. It may just be the grossest game on the market to still maintain an M rating. Some of this feels a little on the cheap and unearned side.

A small feature that’s pretty clever is that the game’s recording moments, typically during big story beats, are actually recorded how you handled the camera. So your zooms, pans, focuses, etc. are all recorded, so make sure to get the best footage!

Outlast 2 is a solid entry in the series and plenty creepy. It features a few bizarre design decisions that hinder it, however, and it doesn’t do enough to push things forward.

By Brian Gunn
Tags: Outlast, Outlast 2, Video Game Review
This entry was posted on Wednesday, May 17th, 2017 at 4:50 pm and is filed under Brian Gunn, Video Game Reviews. You can follow any responses to this entry through the RSS 2.0 feed. Both comments and pings are currently closed.