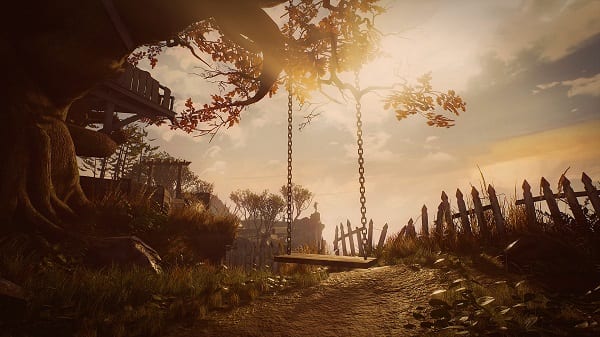 Edith Finch is a fascinating journey into a family’s tragedy.

While it may come as a surprise to our younger self, we’ve developed an affinity for “walking simulators,” particularly Firewatch and Gone Home. The best ones create an interesting world, tell a good story and leave you wanting to know more about them. The latest to try to accomplish that feat is What Remains of Edith Finch, the second title from developer Giant Sparrow.

Things begin with you, as Edith Finch, returning to your childhood home following the death of your mother. She left you a key but didn’t tell you what it opened, so your only recourse is to explore the Finch estate and find what your mother wanted you to see.

It’s an interesting house, ascending multiple floors with hidden passages galore, and it has essentially been frozen in time from when you and your mother abruptly left one evening years earlier. As you go through the house you’ll find makeshift shrines to Finch family members that passed away, and by examining them you’ll become them in the past to learn about their final hours in the world.

As a storytelling mechanic it’s very inventive, and despite the fact that you’re learning about the deaths of your ancestral line, it never feels dark or macabre. That’s because each person’s story is imagined by Edith as she’s reading the poems and journal entries, and it allows the game to create truly abstract recreations of their lives.

For example, one family member suffered from dependency issues, and after rehabbing those he ends up creating an alternate reality. So on one hand he works in a cannery, but at the same time he’s imagining a world where he’s beloved. On screen you’ll cut off fish heads with the right stick and move through your kingdom with the left until the pretend drowns out the real. It’s brilliantly done.

Now, not all of the stories are as interesting or cleverly executed as that one, but they’re all different and have an air of fantasy about them. It’s incredibly effective and marks a swift departure from just walking through the house and listening to narration. Even some of the more mundane flashbacks, like flying a kite, are compelling because of smart visual representation.

Speaking of visuals, What Remains of Edith Finch really distinguishes itself with its graphical style. Sure, most of it is standard first-person stuff, but there’s an entire section that looks like a cel-shaded graphic novel (complete with the theme music from Halloween) and the aforementioned split-screen stuff. All the narration is spelled out on screen, too, which is used to good effect.

As much as we enjoyed the game, it would’ve been nice if there was a little more of it. You should have no trouble finishing it in around two hours and outside of cleaning up a few trophies — damn you, owl, catch the rabbit on the first try! — the only reason to return is to experience everything again knowing where it’s ultimately headed.

We loved learning the Finch’s tortured history in What Remains of Edith Finch thanks to its unique and varied approach to storytelling. If you value a strong narrative, this is a must play.

By HC Green
Tags: Video Game Review, What Remains of Edith Finch
This entry was posted on Friday, May 5th, 2017 at 7:08 pm and is filed under Herija Green, Video Game Reviews. You can follow any responses to this entry through the RSS 2.0 feed. You can skip to the end and leave a response. Pinging is currently not allowed.