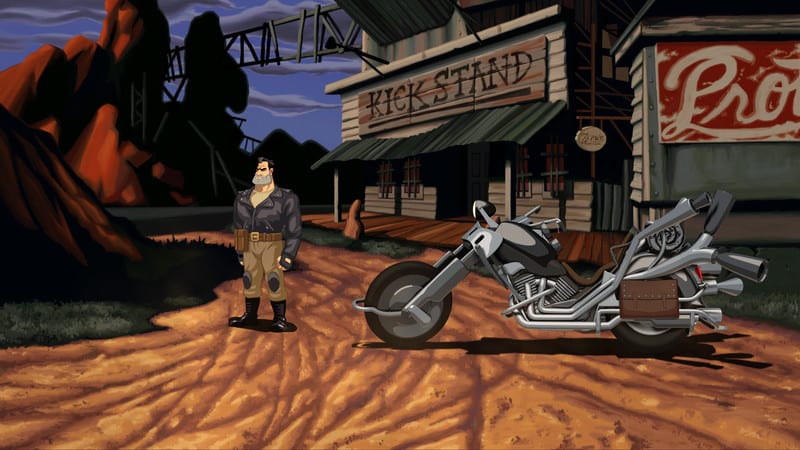 Full Throttle motors in with HD graphics over a 1990s body.

In the 1990s, LucasArts was known for innovative adventure games rather than its later legacy of just pumping out Star Wars titles. One of the titles from the tail end of this cycle was Full Throttle, a post-apocalyptic biker adventure from Tim Schafer that borrowed from Mad Max while also proving to be a smart satire of modern corporate culture.

It was also funny in a Bruce Campbell type of way, and perhaps it’s no coincidence then that lead character Ben almost certainly resembles cinema’s groovy hero.

Full Throttle Remastered takes a ’90s design and brings it into 2017. This means that while some 20 years of innovation have come and gone, it still tries to cram a click-and-point adventure style into a modern console controller.

Like the other LucasArts remasters, it kind of works, or at least it works well enough as you cycle through options and inventory while using contextual points of interaction.

Full Throttle’s aesthetic was originally like a Mad Max cartoon. That hasn’t changed here, though the original pixilated graphics have been upgraded and smoothed over into HD cel-shaded format. It’s essentially the same paint job that was seen on the earlier Day of the Tentacle Remastered release.

The music has gone from MIDI beeps and boops to a modern soundtrack, though there was no need to re-record dialogue. Instead, Full Throttle employs the original voice cast back when such a thing was somewhat of a novelty. The cast includes names of voice actors we’ve come to take for granted: Mark Hamill, Steve Blum, Tress MacNeille, and the lead role of Ben by the late character actor Roy Conrad.

Remastered adventure games do suffer a bit from having interface clunk. They’re simply of a different era, and Full Throttle is no different. Rather than having a mouse, you’re using a modern game controller to cycle through or move the cursor, and different buttons to interact contextually. Again, if you’ve played any of the modern LucasArts remasters, you’ll be familiar with this despite each game offering its own variation on the control scheme.

Thus, the gameplay is driven less by twitch mechanics (more on that later) and more by the story and puzzles. Adventure games from the 1990s sometimes included notoriously difficult puzzles, and the recent Broken Age paid homage to days when puzzles sometimes required you to get out a notepad and figure the logic out. Full Throttle’s puzzles are like that, though lighter on the difficulty scale.

Sometimes it’s difficult to solve a puzzle because the object involved is literally just outside of the screen — as in, you have to walk there to trigger a scroll and there’s no real impetus to do so. You’ll also get in the occasional adventure-game grind of trying to use every object in your inventory to solve a particular puzzle, though Full Throttle isn’t nearly as migraine-inducing as some other titles from the era.

Similarly, the length of the game is shorter than your traditional LucasArts adventure, and while that was a bit of a complaint back in the 1990s, it feels like it fits the modern gaming landscape…

…Except for one action-oriented section in the middle of the game, that is. This segment plays like a biker version of rock-paper-scissors with you trying to choose the right weapon in a semi-action sequence. It’s real time and kind of mashed into the game to try to fit with the biker theme, and it just doesn’t work that well. It’s a minor blemish in an otherwise fun and well-paced adventure.

While the guts under the hood are showing their age, the HD coat of paint and modern music help bring this classic adventure game back into the modern era. Fans that discovered Schafer’s work through Psychonauts and Broken Age will enjoy Full Throttle Remastered where the writing, humour and world still hold up.

By Mike Chen
Tags: Doublefine, Full Throttle Remastered, LucasArts, Star Wars, Video Game Review
This entry was posted on Tuesday, May 2nd, 2017 at 3:41 am and is filed under Mike Chen, Video Game Reviews. You can follow any responses to this entry through the RSS 2.0 feed. Both comments and pings are currently closed.