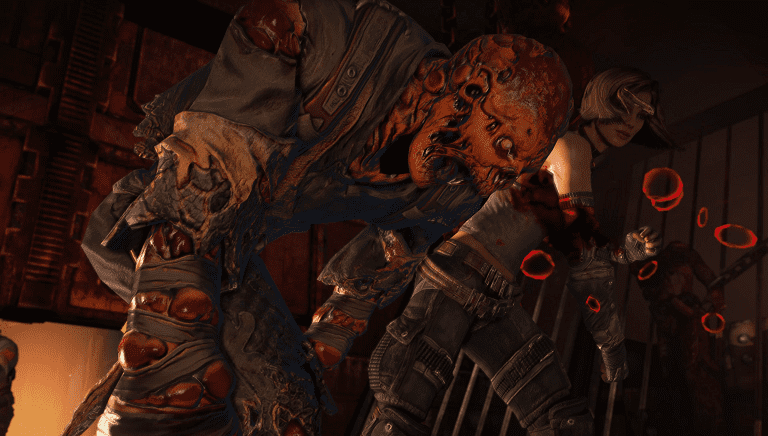 At the height of his influence after the success of the first two Gears of War games, Cliff Bleszinski paired with Electronic Arts to create Bulletstorm, a crass shooter that retained a decidedly Gears-y feel despite some major differences. That was 2011. Now, EA is out and Gearbox is in as Bulletstorm is updated for modern consoles with the Full Clip Edition.

It’s hard to label Bulletstorm a completely unique shooter with so many obvious influences from the Gears series, but it’s not afraid to try different things. At the heart of the game is a SkillShot system, which rewards points based on how creatively you kill your enemies. Those points are then used to upgrade your arsenal and purchase ammo.

So a basic death by bullet accumulation will only net you 10 points. Blow off their head and you’ll get 25. Impaling them on a cactus is worth 100, and so on. There are tons of SkillShots available, some of which are general (e.g., headshots), some that are exclusive to weapons and others that are context specific, like electrocuting a foe. It’s not perfect, but it encourages exploration and variety.

Most of the weapons are one-offs of the usual assortment of guns like pistols, shotguns and sniper rifles, but the twists are pretty clever. The sniper rifle, for instance, allows you to take control of the bullet midflight and steer it around obstacles to find your enemy’s tender spots. Each gun also features a charged shot, which holds unique properties and dishes out additional damage.

Your most versatile tool, however, is the leash. A wrist-mounted energy whip, the leash allows you to grab enemies or objects and pull them toward you. It also slows them down, allowing you to plan out violent ends for your victims. When it works, it’s great. Overcoming chaotic odds by sending enemies flying to their doom really is a lot of fun, even six years later.

Unfortunately, Bulletstorm’s level design doesn’t hold up nearly as well. So much of the game’s fun is tied up in the exoticness of your kills, and when the environment doesn’t provide any interesting options it devolves into leash –> kick –> shoot –> repeat. It’s in these moments you come to realize just how much the game relies on its gimmick(s) to separate from the pack.

As tends to be the case with remastered games from the 360/PS3 era, Bulletstorm: Full Clip Edition looks good but not good enough to be confused with a current title built from scratch. It does benefit from linear, generally small areas, which allowed solid detail work to be done, so it fares better than more open games of that era.

Enemy design is uninspired, featuring the same handful of enemy gang members throughout the majority of the campaign. Only a few nonhuman foes even make an appearance, and outside of the bosses they’re completely forgettable.

Odds are that how you respond to the dialogue will go a long way in determining whether or not you enjoy your time with Bulletstorm. This game is loaded with profanity, off-colour sexist remarks and the kind of stuff you’d be embarrassed to have a parent or non-gamer see. We weren’t offended by it, and there is an option to tone it down (though we’re not sure what it does exactly), but some out there undoubtedly will be.

You are Grayson Hunt, leader of a group of mercenaries known as Dead Echo, which operates under the command of General Sorrano. During a mission you learn that Sorrano has been tricking you into carrying out assassinations, and you refuse to continue following his orders.

Now fugitives, Dead Echo encounter Sorrano in orbit around the planet Stygia and ram the cruiser with its own smaller ship. The results are catastrophic for all involved with only Grayson and crewmember Ishi surviving the crash from Dead Echo. They quickly learn that Sorrano survived as well, and their only way off planet is to reach the General before a rescue ship whisks him away.

Bulletstorm walks an unusual path with its story. On the one hand it’s about revenge and righting a wrong that has been done to you. On the other, the characters spend about 90 per cent of their time busting each other’s balls. It almost feels like they had the outline of a serious story and then decided just to record the most testosterone-filled dialogue they could. It’s an odd mix.

As noted, the game is very linear in its execution, and you kill the same enemies over and over again until you meet one of the few bosses. Despite its repetitious nature, Bulletstorm’s eight-or-so-hour campaign never feels like a slog. The quest to pull off more elaborate SkillShots gives you something to strive for.

Enemy A.I. won’t impress, and even on higher difficulties you should be able to make steady progress as long as you’re patient and let your leash do the heavy lifting (literally). The game’s ending also teases for a sequel that never happened, which is at least a little annoying.

Beating the campaign allows you restart it with all weapons unlocked from the get go. There’s also an option for Duke Nukem to take the place of Grayson, complete with newly recorded dialogue. It’s a funny addition for fans of “The King.”

Echoes is the other main component, taking bite-sized chunks from the campaign and asking you to run through them again for high scores. There’s also Ultimate Echoes, which adds rules to each run, such as requiring you to kill everyone via melee. It’s more challenging, but it can also be vague about its rules when it should be explicit.

Bulletstorm: Full Clip Edition is an underappreciated game, and hopefully the remastered version allows more gamers to experience it. Sure, it has its flaws, but it’s unique enough to warrant picking up a copy.

By HC Green
Tags: Bulletstorm, Bulletstorm: Full Clip Edition, Gears of War, Video Game Review
This entry was posted on Monday, April 10th, 2017 at 1:15 am and is filed under Herija Green, Video Game Reviews. You can follow any responses to this entry through the RSS 2.0 feed. Both comments and pings are currently closed.