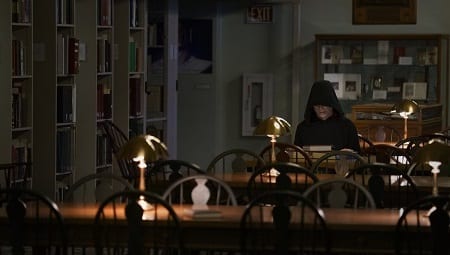 Here we see the Bye Bye Man researching his own origins.

For every inventive horror film there’s probably 50 pulled from the usual genre tropes: seemingly unstoppable force terrorizes attractive young men and women, the hunted find a way to turn the tables, ambiguous ending portends an unknown future. The Bye Bye Man fits the latter to a T as director Stacy Title, helming her first project since 2006, leaves no box unchecked.

After an opening scene depicting an unhinged man murdering people in suburban Wisconsin, we move to the present day at a fictitious University ostensibly located in or close to the town shown in the beginning. Three friends, Elliot (Douglas Smith), John (Lucien Laviscount) and Sasha (Cressida Bonas) are looking to rent a house off campus and agree on a creepy fixer upper.

Shortly after moving in, strange things start to happen, and after finding a coin near a nightstand that came with the house, Elliot opens the drawer to find manic scribbling that includes the name “Bye Bye Man,” which he reads aloud. A séance conducted within the house by their psychic friend turns weird and ends when Elliot shouts the name.

As more and more bad stuff starts to happen, Elliot digs into some archives and learns about the killings in the late ’60s that had been completely covered up. He figures out that saying the name spreads the “madness,” and the only way to protect others is not to say it. Elliot also tracks down the origin of the nightstand and the killer’s widow in the hope of ending the curse.

While not particularly scary, The Bye Bye Man does have a few creepy bits up its sleeve and smartly limits your direct exposure to the titular Bye Bye Man. He’s usually working behind the scenes and in the shadows, driving people mad, rather than trying to kill them directly.

Probably the highlight of the entire movie is its opening scene set 40-plus years before the events that unfold. It’s filmed in an interesting way, creates intrigue as to why it’s happening and leaves some mystery as to how it ultimately concluded — you’ll revisit the incident later and see the end, but it was probably better left to the imagination.

As an otherworldly antagonist, the Bye Bye Man is about as generic and uninteresting as it gets. There’s no compelling back story to uncover, no unsettling taunting or terrorizing (we don’t recall him ever uttering a single word) and no cool signature ability. On top of that, he’s saddled with some terrible looking CGI dog thing. It’s laughably bad.

Speaking of bad, the acting is as wooden as it gets. We’ve never heard of the three main actors, and a look at their respective IMDB pages suggests we won’t be alone. When everything is centred on the tormenting of a small group of people, you’d better be able to care about them. Unfortunately, you don’t. Even the presence of an innocent little girl (Elliot’s niece) didn’t make us care about anyone’s fate.

As mentioned in the opening, the story just follows every horror movie trope you can come up with, and by the midway point we were thinking of when we’d last seen them in better horror movies. At times the execution and/or special effects are bad to the point of parody.

There are no bonus features to be found, though the Blu-ray does contain both theatrical and unrated versions of the film.

By HC Green
Tags: Blu-ray reviews, Movie Review, Stacy Title, The Bye Bye Man
This entry was posted on Monday, April 10th, 2017 at 7:53 pm and is filed under Herija Green, Movie Reviews. You can follow any responses to this entry through the RSS 2.0 feed. Both comments and pings are currently closed.