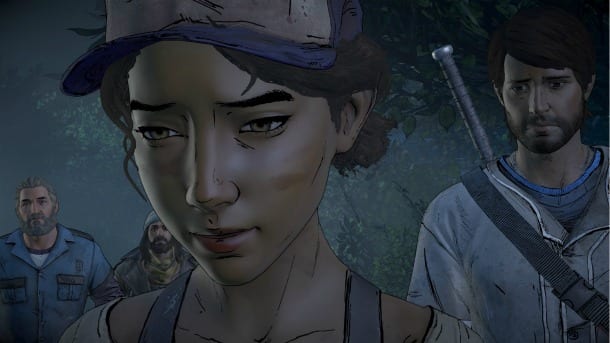 Clementine rejoins Javi’s band of survivors in Above the Law.

In post-apocalyptic fiction, you can only rely on survival tropes for so long. After that, it’s gotta be about interesting characters and strong world-building — rebuilding the world is much more interesting than surviving it.

The best part of The Walking Dead — A New Frontier, Episode 3: Above the Law is that most of it deals with the inner workings of the Richmond community. You get to see its leadership, rules, and outliers, both directly and then flipped on itself, and that makes for an interesting story.

Javi and the sudden return of his jerk brother David power the narrative here, and while David borders on caricature a lot of the time, it presents itself as much more engaging than the first two episodes of the season.

Clementine returns, too, and while she’s really only in half of the episode — including a standalone flashback segment — her story is probably the most engaging. We haven’t decided if that’s because we as players have a longer history with her or if because her stakes are higher. Perhaps both.

While Above the Law’s story is markedly better than the start of this season, it sings the best when Clementine is in the picture. We just hope that the bubbling conflict here doesn’t play into the tropes we’ve seen in all forms of Walking Dead media (AKA “people are horrible and violent forever and ever and ever”).

The flipside to this improved narrative is a seeming lack of choice. If you’ve played Telltale games long enough, it’s usually easy to tell when your choice makes a lasting impact on the branching path and when the developers make it an illusion that just funnels you along.

In the case of Above the Law, it’s more of the latter, other than the cumulative “This character will remember that” notification — and even that didn’t even come up that much. The ongoing joke about Telltale games is that they’ve transformed from adventure games to pure conversation simulators, and that seems to be the case here.

While light on consequence, a markedly improved story powers Above the Law to a level surpassing the season’s first two episodes. Telltale still hasn’t matched the quality of the first two seasons (or the recent Batman series), but at least these walkers have found their stride.

By Mike Chen
Tags: A New Frontier Episode 3, Above the Law, Telltale Games, The Walking Dead, Video Game Reviews
This entry was posted on Wednesday, April 5th, 2017 at 9:54 pm and is filed under Mike Chen, Video Game Reviews. You can follow any responses to this entry through the RSS 2.0 feed. Both comments and pings are currently closed.