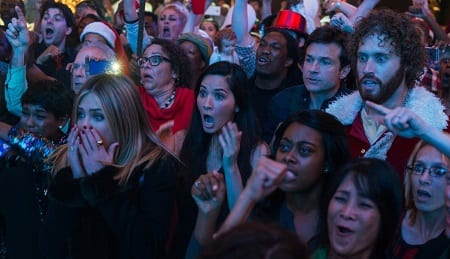 If you’ve worked at a company of any size you may have experienced the awkwardness that often comes when employees gather after hours, especially if alcohol is involved. Nowadays companies are hesitant to expose themselves (figuratively and literally) so things have been toned down, but directing duo Will Speck and Josh Gordon look to recapture the debauchery in Office Christmas Party.

As the holidays approach, Zenotek’s Clay Vanstone (T.J. Miller), who runs the company’s Chicago branch, is lamenting the decay of the traditional office Christmas party. As he tries to think up ways to bring the spirit back, he’s visited by his sister, Carol (Jennifer Aniston), who is the interim CEO of the company their family built.

Based upon the office not meeting its quota, Carol threatens to close down the branch and orders the Christmas party cancelled. In an attempt to meet the quota and save the branch, Josh (Jason Bateman) says they can still land a big client, represented by Walter Davis (Courtney B. Vance), that they’re having lunch with later that day.

At that lunch, Clay, Josh and Tracey (Olivia Munn) decide the only way to close the deal with Walter is to throw an extravagant office party and have Walter attend. With their futures on the line, the trio must try to put something together in a matter of hours to save the branch. What follows will live in office party lore until the end of time…

There’s a lot of comedic talent here and plenty of quirky roles to showcase it. Rob Corddry, who is such a vital part of Ballers’ success, is great as the salty office veteran that seems to find the downside of pretty much everything. Jillian Bell is a female pimp, and while she’s pretty much playing the same character she did in 22 Jump Street she’s still producing laughs. Karan Soni and Vanessa Bayer have good material in shorter stints.

With the film throwing just an incredible number of gags, jokes and completely random moments at you throughout, there are going to be hits and misses. While we’d stop short of saying there are more hits than misses, there are a number of genuinely funny moments. Aniston seems to be having a lot of fun in her bitchy role, and her interplay with Miller is some of the movie’s best stuff.

As good as the chemistry between Aniston and Miller is, Bateman and Munn fall flat. They don’t feel like a would-be couple, and Munn just doesn’t come across as a hacker type. Bateman is wasted playing largely the “only guy in the room with a clue” role he had in Arrested Development minus that character’s own shortcomings.

We’ve seen Kate McKinnon do funny stuff on SNL — Hillary Clinton, Justin Bieber, Kellyanne Conway, Mrs. Rafferty and so on. She’s a funny person. And yet, she seems to be stuck playing the exact same character in every movie: the “woman who’s so socially awkward she makes everyone else feel awkward.” We’ve seen it in Ghostbusters, Masterminds and now here. Stop pigeonholing her!

Office Christmas Party is more a collection of over-the-top gags than a coherent story. Clearly there’s no rule that says a comedy has to make sense, but the film just throws so many things at the wall and sees what sticks. That leads to plenty of duds.

Easily the best part of the bonus materials is the outtakes, as the cast ad-libs various scenes with randomly raunchy lines. It runs about 10 minutes and should generate some laughs. There are a few deleted scenes as well, though the best ones were already added to the unrated version of the film, leaving just a few unnecessary stragglers behind. A “making of” feature is standard stuff.

You’re bound to have some laughs at Office Christmas Party’s sophomoric, joke-a-second approach, but there’s simply not enough substance to make it a standout comedy.

By HC Green
Tags: Blu-ray reviews, Jason Bateman, Jennifer Aniston, Movie Review, Office Christmas Party, Olivia Munn
This entry was posted on Monday, April 3rd, 2017 at 9:28 pm and is filed under Herija Green, Movie Reviews. You can follow any responses to this entry through the RSS 2.0 feed. Both comments and pings are currently closed.