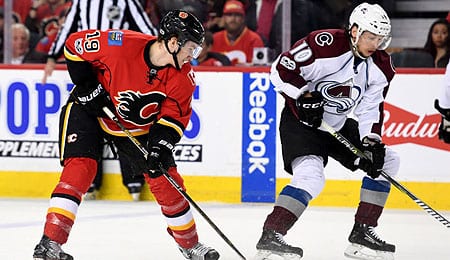 Welcome back to another week of Fantasy hockey. This is the season finale of The Wire Troll for 2016-17, so hopefully you were able to leverage some of our picks into Fantasy glory!

This week, there was a tremendously scary moment early in the Flyers’ win over the Devils on Saturday when goaltender Michael Neuvirth simply collapsed without anyone near him; the Islanders’ playoff push also got harder when John Tavares was ruled out for the final week with a hamstring woe; and Auston Matthews doesn’t seem to be hitting a rookie wall as he tied the Toronto record for points by a rookie.

Now, let’s get to our final batch of Fantasy hockey waiver wire picks of the season…

Sven Andrighetto, RW, Colorado Avalanche (ESPN: 9.2 per cent; CBS: 5 per cent): Playing for the worst team in the NHL has not slowed down Andrighetto, although he sure didn’t seem overly enthused to be in Colorado right after the deadline deal from Montreal (see video below). In the last five games, he’s scored six points (three goals, three assists), highlighted by a two-goal effort (one on the power play) against Calgary. Last month, Andrighetto scored 11 points (five goals, six assists) and his TOI has gone from 14 minutes to over 20 minutes a game. Playing with the rejuvenated Nathan MacKinnon and Mikko Rantanen has done wonder for Andrighetto’s Fantasy value.

Jordan Weal, C, Philadelphia Flyers (ESPN: 2 per cent; CBS: 3 per cent): Called up from the minors midway through the season, Weal has scored eight goals in just 20 games, including goals in each of the last four games, all of them wins for the Flyers. The team has moved him to the second line, and he is now on the second power play unit, which explains why his TOI has gone from 10 to nearly 17 minutes a game over the past few games. Weal has really delivered for the Flyers, and for our money he may have worked his way onto the team’s must-protect list for the upcoming expansion draft.

Connor Brown, RW, Toronto Maple Leafs (ESPN: 7.6 per cent; CBS: 19 per cent): The rookie has scored three goals in the last four games for the Maple Leafs. Brown’s recent highlight was in a victory in Nashville in which he set up the game winning power play goal, and then scored to secure the victory. In March, he racked up seven points (four goals, three assists), maintained his TOI average of 16-to-18 minutes, and is averaged about two shots. Brown really benefits from Toronto’s wide open style of play.

Radko Gudas, D, Philadelphia Flyers (ESPN: 32 per cent; CBS: 26 per cent): Hard-hitting Gudas has points in three of his last four games, including goals against Pittsburgh and the Islanders. He also commits a lot of penalties and racks up the hits and blocks, but note that he left Saturday’s game early with an upper body injury and is expected to miss at least Sunday’s game, so check the injury reports before considering him.

Michael Hutchinson, G, Winnipeg Jets (ESPN: 6.5 per cent; CBS: 10 per cent): In his last three starts, Hutchinson is 2-1 with a 1.98 GAA. He turned aside 25 shots in an overtime victory over Anaheim, and despite having only won eight games this season, he’s earned half of those in the past two weeks as he seems to have stolen the starting job recently.

By David Weightman
Tags: Colorado Avalanche, Fantasy Hockey, New Jersey Devils, Philadelphia Flyers, Sven Andrighetto
This entry was posted on Sunday, April 2nd, 2017 at 5:43 pm and is filed under David Weightman, HOCKEY, The Wire Troll. You can follow any responses to this entry through the RSS 2.0 feed. Both comments and pings are currently closed.