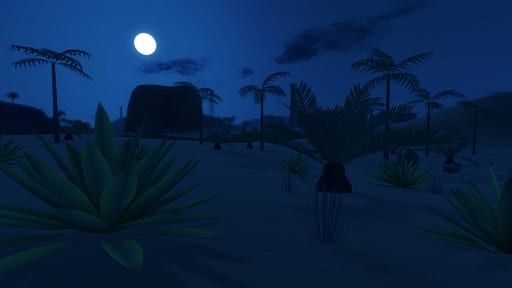 In Everything, control everything you see (and don’t see) in this image.

The butterfly effect is the idea that small changes can effect big changes (also a terrible horror movie), and DoubleFine’s Everything is a game built around that idea. There’s no narrative or direction, but Everything does have scope — from the biggest of the big to the tiniest of the tiny, Everything is equal parts art project, digital tourism and video game, but with a philosophical throughline.

Everything isn’t a game in which controls really matter. Unfolding essentially at your own pace (other than a few occasional guided challenges), all you really need to know is that you move your object (be it a rock, tree, herd of goats, or a planet), you summon them to you in a group, and you communicate with them to make them bigger and stronger.

At first glance, Everything’s procedurally generated world looks PS2/Xbox quality. We’ve seen plenty of large open worlds by now, and they look far more detailed than this. This probably comes from the fact that it’s not an A-list title loaded with budget, but it makes sense once you start to grasp the entire scope of Everything.

Within the first hour, you’ll have controlled a cellular-level organism or an entire galaxy, and the way the game effortlessly lets you zoom up or down on levels of play tells you where the procedural generation power is going. So while Everything isn’t necessarily a looker — especially with its funky movement animation — the way every single bit of the universe connects together somehow makes it feel right.

Everything is a bit hard to explain. It’s best to essentially walk you through the first hour or so. In a procedurally generated desert, you start off as a mammal (i.e., goat, pig, giraffe). You move around and communicate with others of your species until you entice them to join your group.

Now you move as a pack, exploring and communicating with other species, and as you do, you (the player) have the ability to control other species you encounter. As you do, different interactive dialogue boxes pop up, some with advice, some with tutorial-esque guidance, some with non-sequiturs, and some with audio clips of philosophical discussion.

Then your scale of control gets really small, down to the granular level. Or it can get really big, like zooming-out-of-the-galaxy big. All basic movement, group forming and communication is available as big or small as you get, and the rest just plays out as you set off a chain reaction of gathering and exploring — not just in the traditional planetscape of a world, but in order of magnitude, all with a freedom of control.

Some of you may think, “wow, that sounds amazing.” And others may ask “what’s the goal?” The point of Everything really comes down to exploring the interconnectivity of, well, everything, from a small grain of sand to a galaxy. Switching between these things at will gives a Zen scope of the world, and while you probably won’t play for long binge sessions, it’s one of the most intriguing games in the exploration/relaxation genre.

Almost a mash-up of No Man’s Sky’s interstellar exploration and Spore’s life simulation with a little dash of Katamari, Everything is simultaneously serious and lighthearted, game and art. It’s definitely not for everyone, but for those seeking a Zen experience, Everything is a good pick-up-and-be game in the vein of Flower.

By Mike Chen
Tags: Doublefine, Everything, The Butterfly Effect, Video Game Review
This entry was posted on Thursday, March 30th, 2017 at 1:56 am and is filed under Mike Chen, Video Game Reviews. You can follow any responses to this entry through the RSS 2.0 feed. Both comments and pings are currently closed.