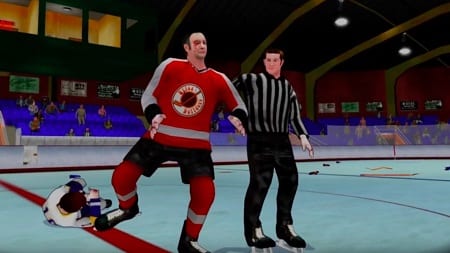 There’s a strange nostalgia around 1970s hockey, glamourized in the cult-classic (and awesome) film Slap Shot. Going to minor league barns, fights breaking out left and right, a place where grit mattered more than skill — those are the elements Old Time Hockey tries to capture, with mixed results.

Old Time Hockey may be thinking old-school, but the game’s primary control scheme mimics EA’s NHL series. There is an option to use classic arcade controls with two buttons (pass/shoot on offense, switch/check on defense) and a “beer” mode, which is a one-handed gimmick involving the right stick and trigger buttons.

However, the game’s campaign teaches and rewards users with similar controls to NHL, with the right analog used for shooting and trigger buttons for passing. While the control scheme is lifted from EA, the problem is that the mechanics are not, so you’re stuck with an unresponsive setup, which is frustrating even when the actual button map is intuitive.

Old Time Hockey wasn’t created with EA’s budget, and the graphics reflect this. Both player and arena models are comparable to games from two generations ago, and — assuming this is a kitschy touch — the ice has a blue sheen to it not seen since the old Sega Genesis sports days.

Animations are smooth, and the commentary for fictional players runs pretty smoothly, though there doesn’t seem to be a lot of it actually recorded as you’ll start hearing the same things over and over, even within the same game.

There’s a lot of fighting. In one game, we had six fights in a single period. This might be fun on some level, except the fighting is generic rock ’em, sock ’em punch/dodge, so there’s no technique to it.

AI is also straight out of a local rec league (we can personally attest to this), which may be the point, except it’d be nice if it didn’t feel like your own players were sabotaging you. The game is advertised as an arcade-style experience, but it doesn’t have the pace of the old Midway NHL Open Ice game or the tight feel of NHL ’94.

Old Time Hockey has a campaign mode, which essentially tries to recreate a Slap Shot-style vibe with a story of a down-on-its-luck small-town franchise. There is some charm to this narrative, except getting through games is such a frustrating process that we wound up not caring.

An overall lack of polish prevents Old Time Hockey from being unique to a specific target. Instead, you’re better off buying an old copy of the NHL series for cheap (since player accuracy isn’t important here) and turning all the arcade sliders to maximum.

By Mike Chen
Tags: Electronic Arts, HOCKEY, NHL, Old Time Hockey, Slap Shot, Video Game Review
This entry was posted on Tuesday, March 28th, 2017 at 3:50 pm and is filed under HOCKEY, Mike Chen, Video Game Reviews. You can follow any responses to this entry through the RSS 2.0 feed. Both comments and pings are currently closed.