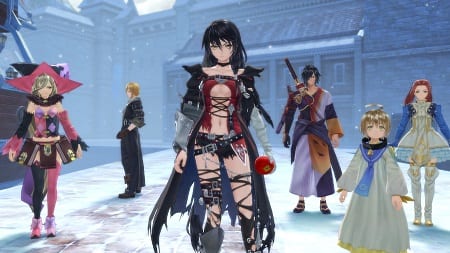 That’s a rather, uh, eclectic group of travelers.

Tales of Berseria is the latest in Bandai-Namco’s long running Tales series, and the first to have been developed with current gen consoles in mind. Did that inject some freshness into the proceedings, or is it just another forgettable JRPG on a PlayStation 4 system already teeming with them?

The Tales series has always been a little ahead of the curve when it comes to melding action elements to JRPG staples, something that’s all the rage these days. Players are given a fairly decent toolkit ranging from the typical well timed perfect dodge to customized combos.

Besteria defaults to a simplified version of the game’s systems, controlling movement and auto assigning what comes next in a combo, but these can be tweaked depending on your style. All in all it’s not too different from the last few entries in the series.

Areas themselves are still fairly bland and lifeless, clearly the primary constraint of still developing a PS3 version. Character designs are on the bizarre side, which isn’t inherently a bad thing, but they don’t always gel with the world, where you’d think our misfit band would cause a bit of a ruckus just standing around.

Tales of Berseria also doesn’t stray too far from series norms when it comes to sound design. Songs tend to be more on the rock and heavy metal side a little more than usual, which makes sense given the angst-ridden lead, but most don’t stand out very much.

Voice acting is largely adequate, and the occasional hammy moment tends to work well with the atmosphere the game sets up. The effects in combat are satisfying and crunchy, even if hearing characters constantly call out the names of some of their moves gets annoying.

Tales of Berseria wants you to know it’s attempting to break the typical JRPG mold fairly early on. A common trope of the genre is an ancient evil being sealed away by some great sacrifice, though most JRPG parties will work to subvert that sort of ritual.

In this game however, it happens fairly quickly, with the unfortunate sacrifice being the lead character’s little brother. In the process, Velvet ends up becoming half demon, and swears vengeance upon the man that killed her brother.

Unfortunately, she is imprisoned for a decade while her target becomes the hero of the world. After breaking out it’s up to her and a colourful band of freaks and geeks to take out what most consider a living saint. And so, the game attempts to tell you that you’re the villains. If only that were true…

Velvet and company are certainly a bit darker than the average JRPG hero these days, but sadly they feel reined in. They have too great of a moral compass guiding them beyond their hatred for specific enemies, and so while the game wants you to think it’s subverting clichés, it’s actually just embracing different ones.

Combat has been refined here to be a little less party reliant, though there’s still a few glaring issues. A cornerstone of the system is a new Soul element, in which if you have three or more, you can trigger some special moves. You typically start with three, and then can earn more via perfect dodges, enemy deaths and so on.

However, you can also lose them when getting hit by a critical attack or if you manage to burn one too early. If you end up with two souls the combat slows down dramatically as you have to do things like attempt to force an enemy to melee you and dodge it to get back up to three. That’s easier said than done when enemies are constantly going after your three party members.

Character upgrades this time around are done via the game’s equipment system. Wearing a piece of gear long enough will impart a permanent passive bonus, and most gear can be upgraded to add additional boosts as well. This is an improvement over previous titles but still feels too grindy and slight. It’s hard to get too excited by a one per cent increase in resistance to poison.

Tales of Berseria is the best the series has been in a while. It still feels somewhat stuck in the past, and it doesn’t end up using the unique story setup nearly as creatively as it could have, but overall it’s a solid JRPG that even manages to stand out a little.

By Brian Gunn
Tags: Bandai Namco, JRPG, Tales, Tales of Berseria, Video Game Review
This entry was posted on Thursday, March 23rd, 2017 at 7:31 pm and is filed under Brian Gunn, Video Game Reviews. You can follow any responses to this entry through the RSS 2.0 feed. Both comments and pings are currently closed.