Blu-ray Review: Fantastic Beasts and Where to Find Them 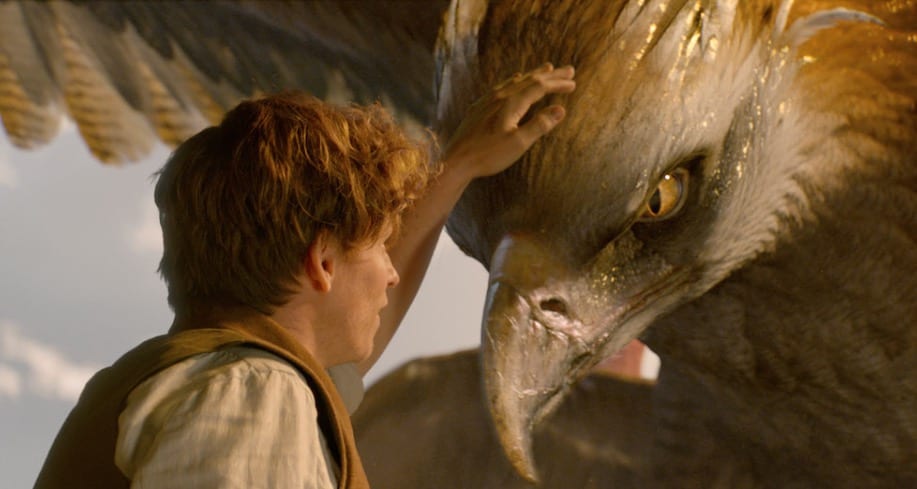 When you have an intellectual property as rich and detailed (not to mention successful) as the Harry Potter franchise, it’s only natural to want to expand on that world. It took five years for the combination of creator J.K. Rowling, director David Yates and Warner Bros to succumb to that itch, but they’ve returned to bring us Fantastic Beasts and Where to Find Them, the first of five planned films.

Set 50-plus years before the birth of Harry Potter, Fantastic Beasts follows the story of Newt Scamander (Eddie Redmayne), a collector and caretaker of rare magical creatures that has just arrived in New York City from England. He quickly loses track of a trinket-obsessed niffler, and in the process of trying to reacquire it, inadvertently switches bags with Jacob (Dan Fogler), a muggle.

While this is going on, Newt is taken into custody by ex-auror Tina Goldstein (Katherine Waterston) and brought before the United States’ Magical Congress, including lead auror Percival Graves (Colin Ferrell) for being unregistered. He’s released when it’s found his bag contains only pastries, and Newt strikes out to recover his bag from Jacob. Unfortunately, the bag is opened and several of the creatures escape into the city.

As Newt looks for these creatures, Graves is searching for a child with extraordinary magical abilities, using a boy in the anti-wizard New Salem Philanthropic Society to help him, amid strange unexplained attacks in the city. Who’s to blame for this and Graves’ true motivations are just two of the problems that Newt and company face as they look up to round up the escaped critters.

World building is one of Rowling’s undisputed strengths, and she does a good job of setting things within the same universe as the Potter stories without leaning on them too heavily — in fact, the odd name or mention of a character are the only direct connections here. Instead, she focuses on setting the table for a new set of adventures by developing new characters and story arcs.

Much like the Potter films, Fantastic Beasts doesn’t employ a lot of A-list talent in featured roles with the obvious exceptions of Redmayne, who has already won an Oscar, and Ferrell, who has been a leading man for over a decade (oh, and a certain cameo…). Still, most of the screen time is spent with largely unknown actors, which makes it easier to see them as their new characters.

Special effects are well done, even if not all of the magical creatures look like they actually exist. The “Obscurus,” which is essentially the manifestation of uncontrolled rage from one with magical talent but without the ability to harness it, is particularly cool looking. Taking things out of the magical world and into the city of New York also helps create a more authentic grounding of the mystical elements in the real world.

Although Fantastic Beasts can feel heavy on exposition and light on some of the whimsy that made the earlier years of the Harry Potter films endearing, there’s little doubt it’s done with a purpose to get you prepared for the upcoming sequels. Considering the task it had in front of it, the film does an admirable job of telling an interesting contained story and planting seeds for future installments.

While the use of lesser-known talent helps the audiences see them as their character, it can cut both ways when the person isn’t up to the part. Such is the case with Waterston, who just doesn’t seem able to keep pace with Redmayne, Fogler or the rest of the cast, which is a problem when she’s basically the second-most important character in the film.

It may seem odd to note this given the underlying plotline of Harry Potter was a purely evil wizard trying to kill an adolescent, but there’s a moment where Newt and Tina are sentenced to death based on one short interrogation and no one involved seems to bat an eye. Obviously they escape their predicament, but it hardly casts the Magical Congress as a sympathetic force going forward no matter who is giving the order (their willingness to blindly follow it is the damning part).

There’s a nice collection of extras, headlined by around 15 minutes of deleted and extended scenes. None of them are particularly vital, but they’ll be interesting for fans of Rowling’s work. Each of the main characters and several of the titular “beasts” also get their own featurettes to flesh them out a bit. The stuff about creating 1920s New York is worth a watch as well.

Fantastic Beasts and Where to Find Them lays a lot of groundwork for its four announced sequels, and that kind of information dump has its pitfalls. Beasts avoids most of them, however, in creating something interesting while also building anticipation for the series’ future.

By HC Green
Tags: Blu-ray reviews, Colin Ferrell, Eddie Redmayne, Fantastic Beasts and Where to Find Them, Harry Potter, J.K. Rowling
This entry was posted on Friday, March 24th, 2017 at 2:34 pm and is filed under Herija Green, Movie Reviews. You can follow any responses to this entry through the RSS 2.0 feed. Both comments and pings are currently closed.