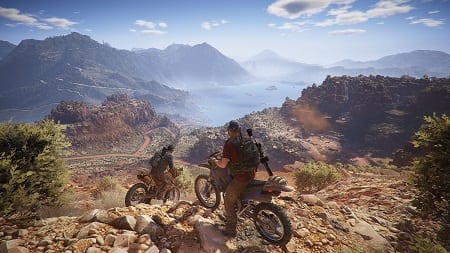 Tom Clancy’s Ghost Recon: Wildlands is the long-awaited continuation of the Ghost Recon series, known for its brutal difficulty and depiction of realism in firefights. What we have here is a game that is much the same but also significantly different than what fans of the franchise may be used to.

In Wildlands, you are installed into the burning country of Bolivia where the Santa Blanca drug cartel is making a mess of our war on drugs. Can’t have that, can we?

At least on console, aiming and shooting could use a touch more refinement. The sticks — even though you can adjust sensitivity and deadzone — just feel as though they’re either not sensitive enough or oversensitive; it’s very hard to find a happy medium here.

In a firefight you can either blast away in third-person or you can click the right stick to look down your sights. You can also switch which shoulder you are looking over while in third-person, and it’s sometimes difficult to remember that clicking toggles your ADS while the shoulder button toggles shoulder position, so don’t be surprised when you do one and not the other while in an intense firefight.

Other control systems while on foot are all responsive, but things get a bit slippery when behind the wheel of a car or in a cockpit of a chopper. These vehicles definitely take a bit of practice to master, particularly reaching the point when you can reliably pilot a helicopter.

Bolivia is a colourful place, there’s no doubt about it, and Wildlands does a spectacular job at depicting the various architecture types and environments of the country. Some towns feel more run down than others, the ruins of ancient civilization are infested with drug baddies, and you’ll even explore thick jungles.

Each section of the map has great terrain variety, including some places you absolutely shouldn’t try to take shortcuts in because you’ll either get blinded by foliage or toss yourself right down a masked cliff. Weather effects are wonderful as well, and sometimes even jaw dropping — taking a helicopter through a thunderstorm at night and watching the lightning bolts illuminate the terrain and rain around you is a superb touch!

Ghost Recon Wildlands also has some of the better voice work we’ve heard, and it’s not just because of the believable delivery, but rather how complete it makes your team feel. Not only are they constantly chatting about something, be it the mission or plans for back home, but they’re also giving accurate up-to-date reports of soldier placements and environmental alerts.

The radio is absolutely annoying, and we know that in Bolivia, English isn’t really the first choice of language, but the DJs feel so overdelivered and forced that it comes off as annoying. Fortunately, you can turn off the radio while in a car, but every citizen in the country has their own radio tucked away somewhere and set to max volume.

That means even if you’re in an intense stealth mission, expect to hear DJs blasting their shtick across the airwaves at piercing decibels. At least a fun mini-game organically sprouts from that: hunting and killing the radios with extreme prejudice.

As you explore, you’ll unlock safe houses that can be used to fast travel, but you can travel to most towns you uncover as well. The map you’re presented with is absolutely littered with things to do, much like the previous 400 Ubisoft games, but we never really felt like things got too repetitive in Wildlands.

Sure, stealing that 16th helicopter for the rebels might get a tad old, but what we really dug is that each encounter is like a miniature puzzle. Do you take it slow and silently take out the guards? Or do you opt to set off some C4 on the other side of the base and then make a beeline for the chopper? In general, every single mission of the game is like this, though there are some that strictly require stealth.

In short, the game is great fun and the repetition is disguised well enough that it won’t feel too grindy. What we did have a small issue with, however, is that there’s very little variation in terms of enemy design. Early on you will fight with UNIDAD forces (somewhat of a security army of Bolivia) who wear body armour… and that’s really as exciting as the enemy design gets in the game.

You’re either fighting paper-thin cartel members wearing wife beaters or UNIDAD soldiers. There are no melee enemies or special types like a flamethrower unit or a shotgun runner, and that kind of sucks because the environment seems made for the likes of them.

Another thing that somewhat irked us is that the game touted the fact that if you dismantle a particular branch of the cartel that you would see results for the rest of the game. Naturally, we decided to go after the security forces.

Once we cleared them out, we didn’t notice any reduction in enemy numbers or even lesser-equipped forces, so it was pretty disappointing seeing that there was very little (any?) observable difference in the game moving forward.

Tom Clancy’s Ghost Recon: Wildlands is a metric ton of fun even with the few issues it has. What the game really offers is a freeform military shooter with intense vibes of games past like Mercenaries or Rainbow Six: Vegas. So if you’re looking for a gigantic game with plenty to sink your teeth into then look no further because Wildlands will fill that void quite nicely.

By Jeff Cater
Tags: Bolivia, Ghost Recon, Santa Blanca, Tom Clancy's Ghost Recon: Wildlands, Ubisoft, Video Game Review, Wildlands
This entry was posted on Thursday, March 16th, 2017 at 9:45 pm and is filed under Jeff Cater, Video Game Reviews. You can follow any responses to this entry through the RSS 2.0 feed. Both comments and pings are currently closed.