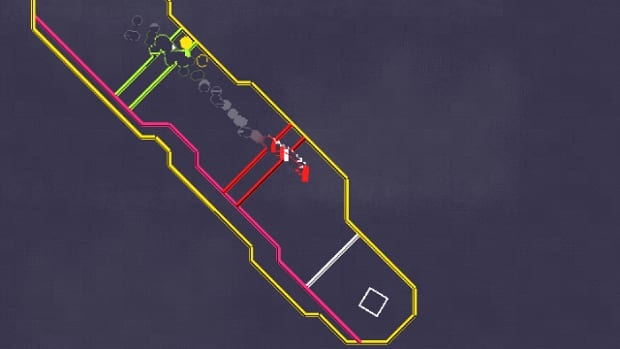 Puzzles get more demanding of your attention rather quickly.

Originally the product of a Kickstarter campaign from a small group of programmers that make up Messhof LLC, Flywrench is a fast-paced blend of a rhythm and puzzle game that takes place in our solar system where you’re tasked to complete satellites orbiting various planets in order to relay a signal.

Flywrench is represented in a minimalistic eight-bit universe with very selective and minor use of colour, but the game also uses certain colours as mechanics. In any given level, you are to guide Dudeo (or Dude0… the font confused us a little bit), a small microbot, from Point A to Point B by way of performing flaps or spins of your wings.

Each level has different coloured barriers that you need to pass through by putting your character (ship? Robo-gnat?) into different positions, such as holding down Square or “X” to match your colour to that of a barrier.

To even reach a barrier you will have to tap “X” in order to flap your wings and guide your momentum with the left stick… where you will inevitably hit a barrier with the wrong colour and have to start again.

As you complete each stage you will attach more pieces to satellites, and once you’ve completed one up to a point you can move onto the next planet. The ultimate goal is to reach the Sun, and the task is definitely not easy, but because of the sheer speed and ease of the mechanics it remains fun and challenging throughout.

In terms of presentation, the speedy puzzles are wrapped together perfectly by the soundtrack of the game as well, and there are more than eight different artists contributing their talent to the game. We really enjoyed the soundtrack, and just as we hope the developers continue to make cool things like this, we hope the artists behind the music also join some additional projects.

Flywrench is certainly something unique. It’s not going to be a game that you spend hours in a row playing, but it’s one that you will keep on your hard drive just because of how fast you can get into a puzzle, play for about 30 minutes and come back again later.