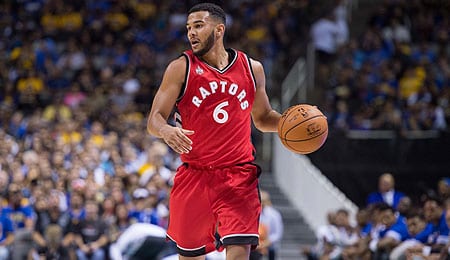 Welcome back to another week of Fantasy basketball analysis. Once again, RotoRob takes the controls of the Troll with Adrian dealing with real world work issues. We’re now just about a week away from the NBA playoff eligibility waiver deadline, so if you’re still in the running for your Fantasy playoffs, congrats!

This week, we learned that Philadelphia rookie Ben Simmons (foot) will not take the floor this season; Pau Gasol (finger) returned to action Friday after missing 15 games for the Spurs; and despite a rumoured deal involving Boston, Jimmy Butler remains a Bull for now.

Cory Joseph, PG, Toronto Raptors (ESPN: 2.1 per cent; CBS: 7 per cent): This is likely just a short-term add with Kyle Lowry (wrist) currently sidelined, but in his start Friday, Joseph put up 11 points with a team-best six assists and three steals. Joseph’s PT is up lately, but he’s struggled a bit with his shooting. Still, overall this season, he’s actually shot better — especially from downtown — so if you need some help in dimes in a deep format, he could be your man. By the way, if for some reason you have difficulty pronouncing Joseph’s name, the video below is just for you! You’re welcome.

Courtney Lee, SG, New York Knicks (ESPN: 12.7 per cent; CBS: 26 per cent): Lee was apparently sick on Friday morning, yet he not only played that night, but went off for a game-high 25 points, adding six boards, five assists, three treys and a steal. Damn, this dude should get ill more often. Lee’s been really delivering lately, shooting a whopping 56 per cent from the floor in February, so you absolutely need to add this massively undervalued performer while he’s rolling.

Lavoy Allen, PF, Indiana Pacers (ESPN: 0.2 per cent; CBS: 1 per cent): It’s been about two and a half years since we last gave Allen some Fantasy love, so it’s high time. He was playing better before a knee injury knocked him out a couple of weeks ago, but he returned Friday and put up a sweet double-double in 21 minutes off the bench, adding a steal and a block while shooting 5-for-5 from the field. Allen got a chance to start a bit earlier this season, but really hasn’t played much until this month. Now that he’s getting PT, he deserves consideration in very deep formats.

Marquese Chriss, PF, Phoenix Suns (ESPN: 4.3 per cent; CBS: 36 per cent): Chriss has shown some seriously aggressive play in finishing off fast breaks, and the rookie is setting himself up for a big second half. He was lights out on Friday and his touches are on the rise, leading to back-to-back games of at least 15 points. The rebounding has been sweet, and he’s had two blocks and two steals in each of the last two games. Toss in a pair of treys Friday, and you’ve got yourself a pretty complete line. Pick him up.

Richaun Holmes, C/PF. Philadelphia 76ers (ESPN: 2.2 per cent; CBS: 7 per cent): Holmes has yet to pop up on the Fantasy radar, but he’s been shooting better this season, and managed to drain 6-of-9 from the field Friday in the first game since Philly traded away both Nerlens Noel and Ersan Ilyasova. With Joel Embiid currently out, there is suddenly tons of PT to be had in the Philly frontcourt and Holmes got 26 minutes of action, going off for a double-double while throwing a serious block party. This is a golden short-term pickup opportunity that you need to take advantage of pronto!

Kelly Olynyk, Boston Celtics (ESPN: 23.2 per cent; CBS: 47 per cent): Olynyk has been coming off the bench, so his playing time can be sporadic at time (just 16 minutes on Friday), yet even in that limited time he still put up five boards, giving him seven straight games of at least that many. His offense (four points) also went AWOL Friday, but prior to that, all he’d done is rhyme off five straight games of at least 13 points and four straight with 15 or more. Olynyk can help you if need some scoring and boards from a big man.

By RotoRob
Tags: Cory Joseph, fantasy basketball, Toronto Raptors
This entry was posted on Saturday, February 25th, 2017 at 2:17 pm and is filed under BASKETBALL, RotoRob, The Wire Troll. You can follow any responses to this entry through the RSS 2.0 feed. Both comments and pings are currently closed.