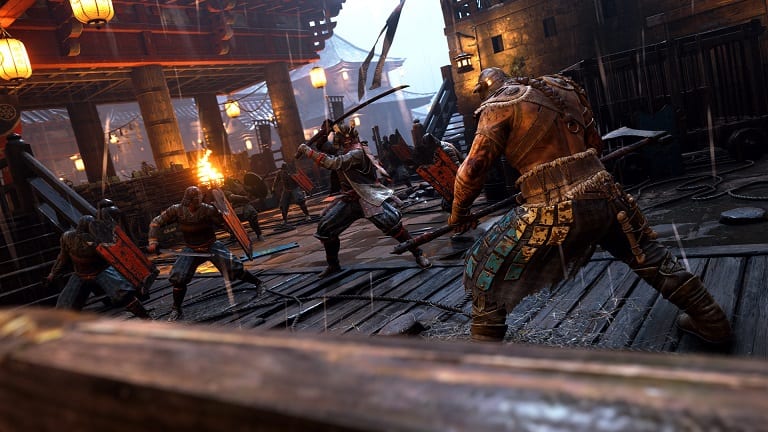 It’s everything we wanted Bushido Blade to be.

Firmly ensconced as one of the most anticipated titles, not to mention new IPs, of 2017, Ubisoft’s For Honor is finally here, bringing with it a unique type of visceral third-person melee combat we’ve never really seen before.

Elegant is the word that springs to mind when discussing how the game handles. At its best, For Honor puts you in one-on-one combat scenarios, tasking you with outmaneuvering your enemy via a series of feints, blocks, parries and strikes.

When you’re locked on both warriors can hold their weapon in one of three positions (up and either side), switching with a flick of the right stick. If your opponent swings you must match their stance to deflect the blow. If you strike you’ll need to attack a direction your enemy is not guarding to connect.

That’s the barebones of the system, but it gets much deeper. Incoming blows can be parried if you time a second input properly, knocking your opponent back and leaving them exposed to a counterattack. A guard break can also expose your foe for a follow-up attack, but it too has a counter that’ll instead open you up for a pounding.

At first it’s a lot to keep track of, but as the hours and duels pile up, the system’s simple complexity begins to come into focus. Where initially you might’ve been too excited and drained your stamina in a series of wild attacks, you’ll find a sense of calm and tactical thinking taking its place.

Each of the 12 fighters has their own unique move sets as well, all but ensuring you’ll find someone that fits your approach — some classes are aimed at more skilled players. That plus environment-specific attacks where you can shove enemies off bridges, into spikes, through fire and more. It’s really a marvelous setup.

Visually, For Honor earns top marks. The environments are beautiful and chock full of interesting detail work that draws you further into its setting. Heroes and enemies alike move fluidly, turning some of the better fights into a mesmerizing dance before reaching a gruesome conclusion. The frame rate performs like a champ, too, even as dozens of foot soldiers fill an area.

While the understated score, ambient effects and clang of metal against metal are all quite good, the audio side as a whole is undercut by some campy voice acting. The performances aren’t particularly bad, but the dialogue is, at best, tongue in cheek — e.g., two Vikings meet carrying the same flail followed by one quipping, “Well, one of us is gonna have to change.” Ugh.

There’s an 18-mission campaign in For Honor, though you’d be hard pressed to follow the thin plot as each of the three factions (Samurai, Vikings and Knights) get their moment to shine. Basically a warlord named Apollyon oversees a whole bunch of killing to lure everyone into war, and ultimately you try to stop her.

In reality, it’s an extended training ground for the multiplayer, though like pretty much any other game built on its multiplayer it can only simulate so much. Odds are you won’t die often unless you crank it up to the highest difficulty as the A.I. tends to fight very deliberately, which is in stark contrast to the type of action you’ll find online. It runs about seven hours, and it’s hard to imagine many will play through it more than once.

Meanwhile, For Honor’s multiplayer features the interesting “Faction War.” After completing a few tutorials, you’ll pick between the Knights, Vikings and Samurai — though it’s worth noting this doesn’t limit which Hero classes you are able to play as, so if you want to play as the speedy Orochi assassin for the Knights you may do so.

Completing game modes earns Assets to deploy onto a map, either to attack or defend, in a giant cross-platform struggle for territorial supremacy. Now, while the Faction War is cross-platform, the actual network play isn’t. So don’t get your hopes up that you’ll cross blades with “opposing” consoles.

The Art of Battle system really shines and is the star of multiplayer because each of the 12 playable Hero classes has distinct play styles that reward practice. For example, a few of us like to play as The Warden, a Knight with good speed and strength. The Warden’s main skill is a move in which you use the top guard stance and wait for an opponent to attack.

When they do, if you counter at the correct time you’ll deliver a devastating attack. Since that’s the Warden’s main move, it creates interesting moments trying to bait an opponent into their upper stance while not revealing too quickly that you intend to severely punish their aggression.

All told there are five modes to choose from: Dominion, which feels like a cross between a MOBA and Capture the Flag in which you push your soldiers forward while taking control points, Elimination (read: Deathmatch), Skirmish, which is a race to 1,000 points by way of killing enemy heroes and soldiers, and then Brawl (2v2) and Duel (1v1) modes for the true tests of mettle.

You’ll also find the usual customization options to be purchased with in-game currency, though you can buy said currency with real money to expedite making your soldier unique. It’s quite robust and makes it highly unlikely you’ll encounter your doppelganger online.

Our biggest gripe with online play is the viability of fleeing from combat. Far too often an outnumbered player can roll away from a group and then sprint to safety — for reasons that are unclear, only fighting reduces your stamina, so you can sprint as long as you want. The game also loses some of its tactical feel when the fights aren’t solo affairs.

With its smooth controls, deceptively deep gameplay and gorgeous graphics, For Honor is a great addition to the world of multiplayer games.

By HC Green
Tags: Apollyon, For Honor, Knights, Samurai, Ubisoft, Video Game Review, Vikings
This entry was posted on Friday, February 17th, 2017 at 7:18 pm and is filed under Herija Green, Jeff Cater, Video Game Reviews. You can follow any responses to this entry through the RSS 2.0 feed. Both comments and pings are currently closed.