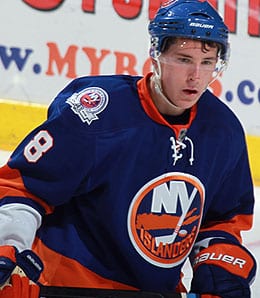 Welcome back to another week of Fantasy hockey. We’re now just over two weeks away from the NHL trade deadline, so be ready to pounce should a deal create an opportunity for Fantasy value.

This week, Henrik Lundqvist became the first European goalie to win 400 games; the Detroit sporting world lost an icon with the passing of Mike Ilitch, owner of both the Red Wings and the Tigers; and Craig Anderson returned to action for Ottawa and wasted no time in making a huge impact.

And now, to this week’s Fantasy hockey waiver wire recommendations…

Ryan Strome, C, New York Islanders (ESPN: 5.8 per cent; CBS: 23 per cent): The former first round pick has flourished lately. In a five game stretch, Strome had two-point games against both the Carolina Hurricanes and the Toronto Maple Leafs, and then picked up an assist in the win over the Flyers. He’s also shown a willingness to stick up for his teammates (see video below). After his down season in 2015-16, maybe Strome is poised for a big second half.

Brock Nelson, C, New York Islanders (ESPN: 15.8 per cent; CBS: 28 per cent): In the last seven games, Nelson has seven points. He scored in four consecutive games, and his highlight was against Toronto, in which he had a three-point night, and scored the game winner in overtime. If Nelson keeps generating the shots he had in that game, and his previous effort, the numbers will be there.

Brett Connolly, RW, Washington Capitals (ESPN: 4.4 per cent; CBS: 10 per cent): The third line winger has come on for the surging Capitals. In the last six games, Connolly has scored four goals and eight points while recording a +7 rating. He started the month of February by scoring the game winner against the Boston Bruins, and then followed it up with an assist against Montreal Canadiens, a goal and an assist in each game against the Los Angeles Kings and Carolina, then he scored another goal against the Detroit Red Wings. Connolly capped his roll on Saturday against the Ducks by adding a fourth helper in five games. The Capitals will now have to rely on guys like Connolly, especially with Andre Burakovsky out until mid-March with a broken hand.

Jason Pominville, RW, Minnesota Wild (ESPN: 33.1 per cent; CBS: 27 per cent): In the past four games, the winger has made a strong contribution for Minnesota. After registering an assist against the Vancouver Canucks, Pominville lit up the Winnipeg Jets by scoring two goals, including the game winner, as part of a four-point game in which he went +3. Then, after picking up an assist against the Chicago Blackhawks, he logged another helper on the power play against the Tampa Bay Lightning. Pominville has points in 10 of his last 11 games, one of several Wild players going great guns since the calendar turned to 2017.

Mikko Rantanen, RW, Colorado Avalanche (ESPN: 7.8 per cent; CBS: 32 per cent): The 2015 first rounder is making the most of his playing time on a bad hockey team. Rantanen, whose playing time has increased to over 18 minutes a game, has scored seven points in the last seven games. His breakout game was against Montreal at home, in which he scored a hat trick and was a +2. This season, the hulking Rantanen is -20, but he has scored 11 goals in 47 games, including five in the last seven games.

Nikita Zaitsev, D, Toronto Maple Leafs (ESPN: 25.2 per cent; CBS: 39 per cent): The young Russian defenseman has been accumulating the points for Toronto over the last four games, including a two-point performance against the Islanders, a power play goal against Dallas, and finally an assist on the power play against Buffalo on Saturday, a game in which he also doled out a game-high and season-best nine hits. Zaitsev is a top pairing blueliner who is averaging almost 22.5 minutes while playing a key role on the first unit power play (eight of the rookie’s 25 points have come with the man advantage). This is someone you need to pick up — now.

By David Weightman
Tags: New York Islanders, Ryan Strome
This entry was posted on Sunday, February 12th, 2017 at 5:44 pm and is filed under David Weightman, HOCKEY, The Wire Troll. You can follow any responses to this entry through the RSS 2.0 feed. Both comments and pings are currently closed.