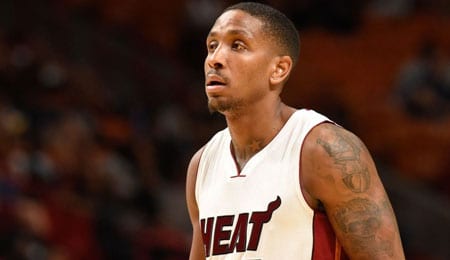 Rodney McGruder is seizing his opportunity for the Heat. (Steve Mitchell-USA Today Sports)

Welcome back to another week of Fantasy basketball. Adrian is out of action this week, so the Troll duties fall to RotoRob.

This week, Russell Westbrook sounded chilly when asked about the return of Kevin Durant to OKC; Charles Oakley has been banned from MSG after a major outburst; Now that Magic Johnson is working with the Lakers, he’s made it clear he wants to ultimately “call the shots.”

Ben McLemore, SG, Sacramento Kings (ESPN: 1 per cent; CBS: 4 per cent): After showing signs of breaking out in 2014-15, it’s pretty much been all downhill for the seventh overall pick from 2013. However, before we completely write McLemore off as a bust, it’s worth pointing out that lately he’s been jacking them up from downtown as a ridiculous pace, canning 9-of-15 from beyond the arc over the last two games. On Friday, he narrowly missed a double-double while adding four steals, and last week he showed signs that he could get to the line more often. Slowly, but surely, McLemore’s game is forming. Perhaps it’s worth picking him up to see if he’s simply a late bloomer.

Rodney McGruder, SG/SF, Miami Heat (ESPN: 1.3 per cent; CBS: 4 per cent): With Dion Waiters (ankle) out, McGruder is showing what he can do. Starting with a 15-point, five-rebound, four-assist performance in 39 minutes on Monday, McGruder has now recorded three straight double-digit scoring games, adding nice rebounding numbers and some dimes with plenty of steals and treys. The rookie has seen a major spike in minutes this week, so is definitely worth adding in deeper formats. Just keep McGruder away from Brook Lopez (see video below).

Okaro White, PF, Miami Heat (ESPN: unowned; CBS: unowned): Has anyone noticed that the Heat is 12-0 since signing White to a 10-day contract (since extended for the remainder of the season, and another year after that)? He’s seeing decent PT (25 minutes last Saturday and then 31 on Friday) and making enough contributions that it’s time to consider him as a flier in very deep formats. White’s even shown a superb stroke from downtown, and if he starts getting more touches, his value could really spike, so at the very least keep your eye on this kid.

Matt Barnes, SF/SG, Sacramento Kings (ESPN: 18.1 per cent; CBS: 34 per cent): The old guy keeps seeing big minutes, and he’s taking advantage of them. He was one rebound shy of recording three straight double-doubles last week before cooling somewhat on Friday. With the Kings dealing with plenty of injuries, Barnes is looking like a great play right now as his touches are up over the past week or so.

Dewayne Dedmon, San Antonio Spurs (ESPN: 4.1 per cent; CBS: 12 per cent): Need help on the glass and a boost in field goal percentage? Try Dedmon on for size. He’s drained 12-of-15 from the field over the last two games, recording double-doubles in both. With 75 per cent FG shooting over the last five, Dedmon is now shooting nearly 62 per cent on the season. Offense is not really his thang, but he’s getting more touches than ever, and canning them at a rate that suggests he deserves more looks. At the very least, he deserves a look on your Fantasy roster.

Tarik Black, Los Angeles Lakers (ESPN: 1.5 per cent; CBS: 3 per cent): Black isn’t quite getting enough minutes to be a staple in regular size leagues, but certainly deserves consideration in deeper formats given what he’s accomplishing in his limited PT. He recorded a double-double on February 2, then flirted with two more this week despite not playing more than 20 minutes in either game. Black has shown an ability to carve out space in the post and go up strong with the rock.

By RotoRob
Tags: Miami Heat, Okaro White, Rodney McGruder
This entry was posted on Saturday, February 11th, 2017 at 8:44 pm and is filed under BASKETBALL, RotoRob, The Wire Troll. You can follow any responses to this entry through the RSS 2.0 feed. Both comments and pings are currently closed.