The Wire Troll: Is a Hurricane Starting to Form in Carolina? 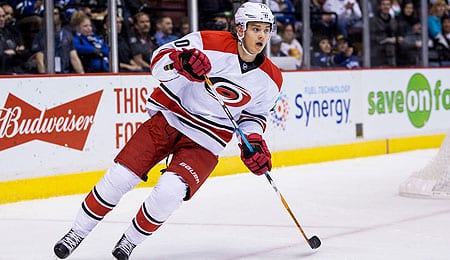 Welcome back to another week of Fantasy hockey waiver wire recommendations. We’re just over three weeks away from the trade deadline, so it’s a good time to start paying a bit closer attention to all those rumours.

This week, Robert Fabbri suffered a torn ACL and will miss the rest of the season; with ASU pulling out of a proposed deal, the future of the Coyotes is again in doubt; and the Calgary Flames opted to hold a practice in Central Park.

And now, to this week’s picks…

Sebastian Aho, RW, Carolina Hurricanes (ESPN: 28.8 per cent; CBS: 49 per cent): The Finnish rookie has been one of the reasons why the Hurricanes have been making a push toward the playoffs. After the All-Star break, Aho broke out in a big way with a four-point night (including a hat trick) in a dominating victory over the Philadelphia Flyers. In the next game against the Edmonton Oilers, he scored the game winning goal midway through the third period on an absolute blast (see video below). One stat that shows Carolina is believing in Aho has been the ice time. Earlier in January, he was averaging between 13 and 14 minutes, but since he has found his groove, his ice has now gone up to 17 to 18 minutes a game.

Elias Lindholm, C, Carolina Hurricanes (ESPN: 7.2 per cent: CBS: 20 per cent): The success that Aho has enjoyed can be contributed to an extent to his linemate. In all of the wins in the past week, Lindholm has picked up five assists, including two helpers that set up game winning goals. He’s not a goal scorer, but now it seems he has found some chemistry on the line with Aho and Jordan Staal, making him worth consideration for Fantasy purposes.

Josh Bailey, LW, New York Islanders (ESPN: 20.4 per cent; CBS: 29 per cent): Quietly, Bailey has been providing a spark. In the past five games, he’s scored four goals — two of them on the power play — and has been a +2. Bailey is still averaging about 17 minutes on the top line, and if he continues to produce with Anders Lee and John Tavares, he could be a player to keep an eye on.

James Reimer, G, Florida Panthers (ESPN: 6.3 per cent; CBS: 18 per cent): With the struggles of Roberto Luongo, Reimer has led the Panthers to victory in the past few games. In the win over the Anaheim Ducks, Reimer stopped 22 of 23 shots, and then against interstate rival Tampa Bay, he picked up another win as he allowed again only one goal on 32 shots. In his last seven starts, he is 5-1-1, and in the five victories he has allowed only seven goals. Reimer is definitely worthy of consideration if you need a second goalie.

By David Weightman
Tags: Carolina Hurricanes
This entry was posted on Monday, February 6th, 2017 at 10:29 am and is filed under David Weightman, HOCKEY, The Wire Troll. You can follow any responses to this entry through the RSS 2.0 feed. Both comments and pings are currently closed.