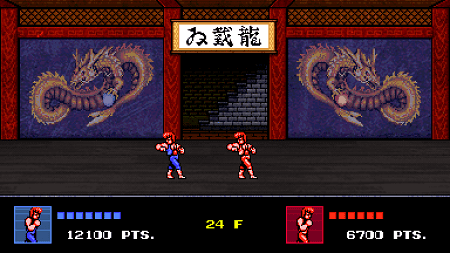 Although we’re certainly familiar with the Double Dragon series, we remember it more as a jumping off point to better beat ’em ups like Streets of Rage and River City Ransom than a true nostalgic treasure. We were surprised then to learn that Arc System Works was bringing Double Dragon IV to modern consoles… and even more shocked to find out it was a new game built on NES-era tech.

Whether you’re talking about presentation, controls or tactics, Double Dragon IV absolutely nails the old-school feel. In fact, its strict adherence to the source material is to its detriment. The problems start with the controls, which remove anything resembling precision from the equation and make you feel ponderous and awkward — two essential traits of any martial arts expert.

Graphics and sound are painstakingly recreated, all the way down to simulated screen tearing and flickering. We’re sure there are gamers out there that appreciate the approach, but we don’t understand the rationale of intentionally making it appear that your game doesn’t work properly. It’s fine to dip into the 8-/16-bit nostalgia wave; just at least make it pleasant to look at.

By far the biggest issue with Double Dragon IV, however, is how many outdated and cheap tricks it uses to whittle away your health bar. Enemies attack from off screen and are constantly looking to keep you down by punching or kicking you just as you rise. A powerful offensive manoeuver typically allows you to avoid one enemy, but there’s seemingly always another one waiting to land another cheap shot.

It’s an approach that was built on getting arcade-era gamers to deposit quarter after quarter in the machine. It was cheap then. It’s cheap now. Honestly, the best way to counter is to try to use the same tactics of timing your attacks to land just as your enemy gets to their feet. Does it work? Sure. Is it fun? Not in the slightest.

As sketchy as the combat is, the “platforming” is considerably worse. There are only a few areas where you have to worry about jumping, but they’re just awful. We consistently lost more lives in these sections than in the rest of the game combined thanks to how unresponsive jumping is. Enemies routinely fall to their death as well, which is at least good for a few laughs.

Adding a second person makes things marginally more enjoyable, though much of that comes from just laughing at the sheer inanity before you. At least the game is mercifully short (less than an hour) and is reasonably generous with continues, so even with all the preposterous deaths you should be able to reach the end credits with modest determination.

Although we were cautiously optimistic when we booted up Double Dragon IV, its fanatical adherence to outdated gameplay mechanics leaves this pseudo blast from the past dead on arrival. If you want a more enjoyable melding of past and present go download Double Dragon Neon.

By HC Green
Tags: Double Dragon IV, Video Game Review
This entry was posted on Monday, February 6th, 2017 at 8:47 pm and is filed under Herija Green, Video Game Reviews. You can follow any responses to this entry through the RSS 2.0 feed. You can leave a response, or trackback from your own site.