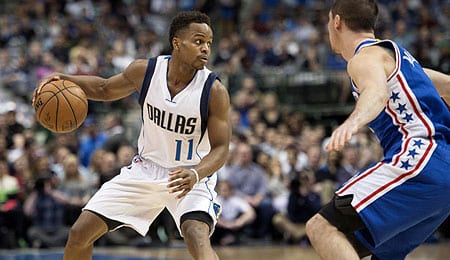 Yogi Ferrell is making waves in Fantasy. (The Smoking Cuban)

This week, Yao Ming unveiled and retired his jersey in Houston; things got heated in an exchange between Shaquille O’Neal and Charles Barkley on TNT; and Carmelo Anthony trade rumours still circle the locker rooms of the NBA.

In the spirit of Super Bowl Sunday, here are some “super” waiver wire recommendations…

Norman Powell, SG, Toronto Raptors (ESPN: 4.7 per cent; CBS: 8 per cent): With DeMar DeRozan in and out of the lineup and missing ample time with an ankle woe, Powell has filled in well for the All-Star with 10 or more points and stat sheet stuffing over his last three contests. Powell is the perfect temporary supplement to insert into the lineup for anyone lacking at the shooting guard.

Yogi Ferrell, SG, Dallas Mavericks (ESPN: 19.2 per cent; CBS: 35 per cent): Following four solid outings — including a 32-point show in a win against the Trail Blazers Friday (see video below) — Ferrell has struck a two-year deal with the Mavericks. Not only is he very deserving of it from the showings so far, but he also deserves a roster spot in your Fantasy leagues.

Rondae Hollis-Jefferson, SF, Brooklyn Nets (ESPN: 6.4 per cent; CBS: 29 per cent): Hollis-Jefferson has been off the Fantasy radar for some time, but started the month of love off right with a lovely 16 points, eight rebounds, three assists and a block against the Knicks Wednesday. All we could hope at this point is that his outings don’t turn out to be as short as the month of February itself.

Shabazz Muhammad, SF, Minnesota Timberwolves (ESPN: 6.1 per cent; CBS: 12 per cent): Muhammad has hit us with a scoring barrage over the last four games, reaching double-digits in each. He has meshed well with all the surrounding youngsters on the Timberwolves roster, and looks to potentially gain some Fantasy upside stepping in for an ailing Zach LaVine (knee).

John Henson, Milwaukee Bucks (ESPN: 4.2 per cent; CBS: 20 per cent): After seeing next to no action in recent games, Henson drew a start Friday and went off for 16 points, five boards and four blocks in 31 minutes before fouling out. If he starts receiving consistent minutes again, he’ll become a very valuable option, and a great play in DFS formats while his salary is modest.

Frank Kaminsky, Charlotte Hornets (ESPN: 10 per cent; CBS: 36 per cent): Kaminsky may struggle defending the post, but his ability to spread the floor gives the Hornets a unique weapon on offense. He’s been shooting well from the line lately, but it sure would nice to see him get there more often, because that’s the key to him really unlocking his offensive potential. Those seeking a rebounding big man will need to look elsewhere, but Kaminsky has done a better job off the defensive glass in his sophomore season.

By Adrian Wallace
Tags: Yogi Ferrell
This entry was posted on Sunday, February 5th, 2017 at 6:08 pm and is filed under Adrian Wallace, BASKETBALL, The Wire Troll. You can follow any responses to this entry through the RSS 2.0 feed. Both comments and pings are currently closed.