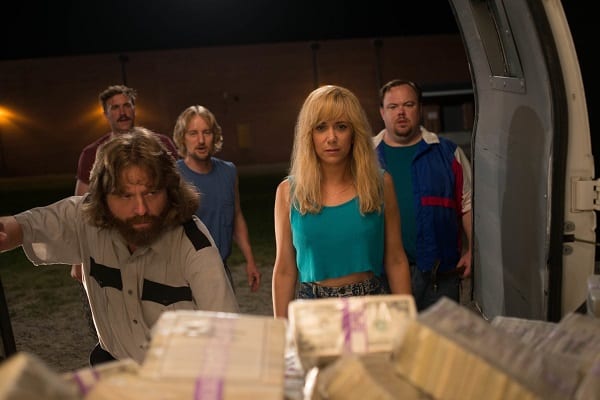 A little less sophisticated than The Italian Job.

On paper, Masterminds is about as close as it gets to a slam dunk. You have Jared Hess, the director of Napoleon Dynamite, at the helm. A cast that includes comedy heavyweights Zach Galifianakis, Kristen Wiig, Owen Wilson and Jason Sudeikis among others, and a true story about a ridiculous robbery gone bad on which to build.

What could possibly go wrong…

Although it seems impossible, the key points of this movie are based on fact. Back in 1997, David Ghannt (Galifianakis) was an armoured truck driver that quickly became infatuated with his partner, Kelly Campbell (Wiig). Campbell gets fired after a short time for insubordinate behaviour but remained someone David thought about frequently.

A short time later, Campbell is hanging out at the home of Steve Chambers (Wilson) when a news story about a robbery of Loomis comes on. Chambers approaches Kelly about doing their own robbery, and after some initial reluctance she agrees to use David’s feelings for her to set up a meeting. Thinking Kelly will run off to Mexico with him after the heist, Ghannt decides to do it.

There are some hiccups in the robbery, but Ghannt eventually makes off with more than $17 million before heading down to Mexico to await Kelly. Unfortunately for David, he has three problems: he only took 20 grand across the border, he left a recording of the robbery behind, and Kelly has no intention of meeting up with him.

It only gets more complicated from there as with David stuck in Mexico, Steve is spending the money like crazy and has decided his best play is to report Ghannt’s whereabouts to the authorities. And if that doesn’t work, more drastic action may be needed.

We’re not huge fans of Sudeikis, who seems to play the same “I’m cooler than you” character in every film or SNL skit, ever. Well, he’s the best thing in this movie as sadistic hit-man Mike McKinney, who is hired by Chambers to kill Ghannt. His shtick is over the top, at one point attempting to kill David with a decorative Civil War era rifle, and it’s actually quite funny.

Galifianakis deserves some credit for his physical comedy, which leads to a few laughs — the sequence with him eating spicy street tacos, chugging questionable water and then clearing the hotel pool led to one of our few LOLs — and general buffoonery. It’s too much at times, both in terms of how he’s dressed and how clueless he is, but he does what he can with what he’s given.

Considering all of the talent involved in Masterminds, it’s disappointing that it isn’t funnier. Wiig is one of our favourite comedians, but she’s left to flounder in what is largely a straight role outside of a few silly bits early on. Likewise, fellow SNL actress Kate McKinnon plays the same uncomfortably weird character she did in Ghostbusters — we’re talking nearly verbatim minus the science angle.

There isn’t a lot of continuity here, either, with a number of scenes inserted to try to elicit goofy laughs that go nowhere. Considering that the credits roll in less than 90 minutes it’s strange to think it still needed so much filler to run that long. The comedy also slants too far toward condescension, inviting you to mock the people involved for being poor, or stupid, or both.

There’s a grand total of one featurette, but at least it’s an interesting one. Dubbed “The Imperfect Crime,” it revisits the actual crime with input from agents that investigated the case and, more importantly, the real-life David Ghantt.

You learn how he went about it along with the roles the others played. It’s well worth watching, and it provides some insight into just how much they changed the Kelly character for the sake of the film.

It’s hard to view Masterminds as anything but a missed opportunity. The likes of Galifianakis, Hess, Wiig and Wilson are proven commodities in the comedy game, so you’re left to assume the material they were given to work with simply wasn’t up to par.

By HC Green
Tags: Blu-ray reviews, Jason Sudeikis, Kristen Wiig, Masterminds, Movie Review, Owen Wilson, The Italian Job, Zach Galifianakis
This entry was posted on Friday, February 3rd, 2017 at 7:15 pm and is filed under Herija Green, Movie Reviews. You can follow any responses to this entry through the RSS 2.0 feed. Both comments and pings are currently closed.