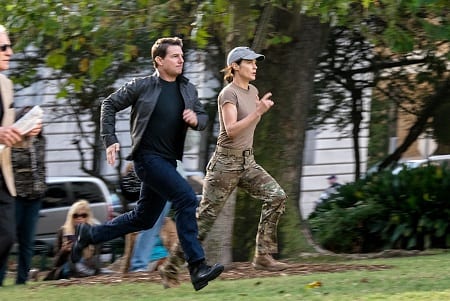 Rumour has it the original title was Jack Reacher: Never Stop Running.

Even at age 54, Tom Cruise remains one of the preeminent action stars in Hollywood, largely on the strength of his role as Ethan Hunt in Mission: Impossible. He seemed to find another sustainable role as Jack Reacher in 2012’s film of the same name, and now Cruise returns to test the character’s staying power in Jack Reacher: Never Go Back.

As with the original, Never Go Back is based on the long-running book series from Lee Child. In staying with the author’s work, the movie tells a contained story that in no way builds on what audiences saw four-plus years ago with Reacher being the only connection.

After collaborating with Major Susan Turner (Cobie Smulders) to break up a human trafficking ring, Reacher decides he’d like to take her to dinner, traveling to Washington D.C. to meet. By the time he arrives, however, Turner has been arrested on charges of espionage. Despite being told to steer clear, Reacher starts looking into the case.

This involvement quickly leads to Reacher being framed for murder and locked up where he springs Turner before a rogue private military organization called Parasource can have her killed. Complicating matters further is a paternity suit that claims 15-year-old Samantha (Danika Yarosh) is Reacher’s daughter, which makes her a target for the same people that tried to set him up.

Now Reacher and Turner must uncover the secret Parasource is hiding while staying ahead of both the U.S. military that wants to lock them up as well as a dangerous assassin known simply as The Hunter (Patrick Heusinger) that’d rather put them in the ground. And they’ll have to do it all while still protecting the rebellious Samantha, who just might be Reacher’s daughter.

Jack Reacher is an easy character to root for. He’s clever, resourceful and knows how to kick an ass or six at any time. Cruise handles the “fish out of water” pseudo parenting well, creating plenty of lighter moments to keep the story upbeat. His stunt work and high impact fighting sequences are top notch, though there are times when it feels like the line is blurring between Reacher and Mission Impossible’s Hunt.

One of the more pleasant surprises is how Turner is portrayed as being on par with Reacher in terms of being a capable protagonist. Smulders radiates physicality and a no-nonsense attitude, and the movie smartly steers clear of the romantic angle that seems like a foregone conclusion early on.

Whereas the original kept Reacher in the role of the hunter, he and Turner are the hunted here, and that role reversal puts a different twist on Never Go Back. It also dials up the action with a number of well choreographed fights, both hand to hand and with guns. Despite our issues with the villain (more on that shortly), his fights with Reacher are intense and varied.

OK, so about that villain… It seems appropriate that “The Hunter” is never given a proper name because he’s pretty much a carbon copy of dozens of other bad guys. Yeah, we get it. He’s vicious and trained to the point that he’s a match for Reacher. Cool. Too bad there’s no depth to the character because instead of hating him you end up just being annoyed by him. And he runs weird, too.

Another character that doesn’t click is Samantha. She’s just able to shrug off too much, popping off sassy one-liners minutes after seeing people murdered. It’s one thing for the combat-hardened Reacher and Turner to roll with these situations, but when Samantha knows people are trying to kill her and she’s still behaving like a “troubled teen” it seems silly.

It’s also worth noting that the reveal of what Parasource has been doing is pretty underwhelming. You keep thinking there’s going to be some big sinister plot behind it all, but then when you find out what it was it just feels like something that might’ve surprised audiences 20 years ago.

There’s a wealth of additional content available, all of which relates to the making of the film. As usual, the ones pertaining to how the fight scenes were put together prove to be the most interesting, though perhaps the single most revealing item from any of them is that The Hunter was not in the book the film is based on — it certainly helps explain his one-dimensional nature.

Jack Reacher: Never Go Back wasn’t as fresh or well constructed as the first film, but Cruise’s work in the title role makes it eminently enjoyable. While we’re still on board for a third installment, we hope they find better antagonists for Reacher to thwart.

By HC Green
Tags: Blu-ray reviews, Jack Reacher: Never Go Back, Tom Cruise
This entry was posted on Monday, January 30th, 2017 at 3:42 am and is filed under Herija Green, Movie Reviews. You can follow any responses to this entry through the RSS 2.0 feed. Both comments and pings are currently closed.