The Wire Troll: Andre Burakovsky Coming Into His Own 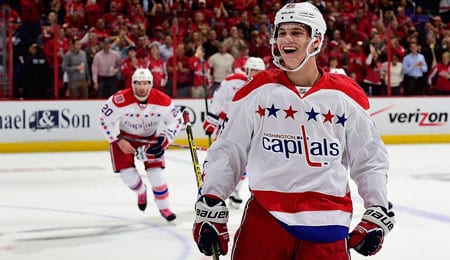 Young Andre Burakovsky has had plenty of reason to smile lately. (Patrick McDermott)

Welcome back to another week of Fantasy hockey. It’s the All-Star break — a perfect opportunity for you to raid the waiver wire while your league mates are watching a game that means nothing.

This week, Mike Smith scored a 188-foot goal through a tiny slot in the net to steal the show in the skills competition; Wayne Gretzky stepped in as an All-Star coach in place of John Tortorella, who is dealing with an ill pooch; and the NHL still hasn’t figured out whether its players will be headed to South Korea for the 2018 Olympics.

And now to this week’s Fantasy hockey recommendations…

Andre Burakovsky, LW, Washington Capitals (ESPN: 24.5 per cent; CBS: 49 per cent): Burakovsky only averages between 10 and 12 minutes of ice time, but in the past two weeks, he’s stepped up his game, scoring 12 points (5G-7A), which included three goals on the power play. During this stretch he’s gone +8. A couple of Burakovsky’s highlights last week included a goal and an assist in a win over the New Jersey Devils, and three assists in a rout over the Carolina Hurricanes (while getting absolutely robbed of another goal — see video below). His first half stats included 10 goals, 27 points and a +10 rating. The goal he scored against the Devils on Thursday gives Burakovsky back-to-back double-digit goal seasons.

Patrick Eaves, RW, Dallas Stars (ESPN: 47.4 per cent; CBS: 50 per cent): Eaves, who is playing on the top scoring line with Jamie Benn, continues to have a strong month of January. In the last week, Eaves scored three goals, including two on the power play, had seven points, and saw his ice time rise from 14 minutes to nearly 19 minutes a game. This month, he’s scored nine points (5G-4A), and for the first half he has 18 goals (tied for the team lead in Dallas), including 10 on the power play, and 31 points, but beware if you want to add him because he is a -10 after the first half of the season, which is by far a career worst.

Zack Smith, C, Ottawa Senators (ESPN: 11.9 per cent; CBS: 16 per cent): The veteran centre has been one of the reasons why Ottawa has been making a push for the playoffs. On Tuesday, Smith scored a power play goal in a shutout victory over the Washington Capitals and the previous game he scored twice and was a +3 in a tough overtime loss to the Columbus Blue Jackets. In the month of January, Smith has nine points (4G-5A), and is a +4, not to mention he is averaging about 18 minutes of action.

Radim Vrbata, RW, Arizona Coyotes (ESPN: 26 per cent; CBS: 35 per cent): Although he’s been relegated to the third line, the 35-year-old veteran is slowly putting up points for the lowly Coyotes. In the past five games, Vrbata has been a +4 for Arizona, including a four-point night (1G-3A) against the Tampa Bay Lightning. He’s been averaging about four shots despite the fact he only plays about 15 minutes a game. Note that the downside here if you were looking to acquire Vrbata is he’s a -14 so far, although if he was traded to a contender, ostensibly his numbers would improve in that regard.

Trevor Daley, D, Pittsburgh Penguins (ESPN: 28.2 per cent; CBS: 50 per cent): Even at his age (33), Daley remains a solid keeper league option. He’s been seeing more ice time lately, and with 14 shots over the last four games, has been generating chances, to the points will come (he did score his fourth goal of the season in the first of those games). Remember that Daley is just two seasons removed from a 16-goal campaign.

By RotoRob
Tags: Andre Burakovsky, Washington Capitals
This entry was posted on Sunday, January 29th, 2017 at 4:52 pm and is filed under David Weightman, HOCKEY, The Wire Troll. You can follow any responses to this entry through the RSS 2.0 feed. Both comments and pings are currently closed.