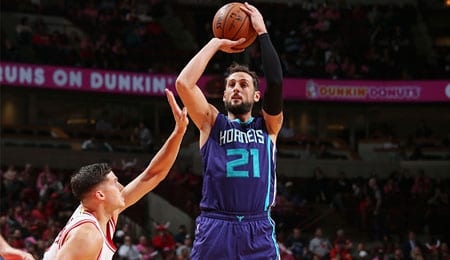 Marco Belinelli could prove quite useful over the next little while. (NBA.com)

Welcome back to another week of Fantasy basketball action. RotoRob is writing the Troll this week with Adrian facing a heavy workload as he tries to fend off a wave of robot aardvarks. Next week we’ll see some global games in Mexico and London, so watch the schedules in terms of the number of games each team is playing, because these tilts will affect things.

This week, Cleveland finalized a deal that netted it Kyle Korver from Atlanta; Coach Doc Rivers wants his team to stop complaining and racking up the techs; and Dirk Nowitzki — who is now fewer than 1,800 points shy of catching Wilt Chamberlain in all-time scoring (points, not women) — says he’d have no problem shifting to a bench role in Big D.

And now, let’s get to this week’s Fantasy basketball waiver wire picks of the week…

Marco Belinelli, SG, Charlotte Hornets (ESPN: 3.8 per cent; CBS: 11 per cent): Belinelli just came back from a five-game absence because of an ankle injury, and now he may be in line for extra minutes with Nicolas Batum (knee) out Saturday and possibly longer pending further evaluation. Belinelli has been used exclusively off the pine so far this season, but he’s shot well and is doing a solid job of getting to the line. His upside is limited, but in a pinch, he could prove useful in deeper formats and possibly as a sneaky DFS play on Saturday. Hey, if nothing else, you know that Belinelli is wily; check out the video below as he came so close to pulling off the miracle shot of the season.

Kyle Korver, SG, Cleveland Cavaliers (ESPN: 22.6 per cent; CBS: 48 per cent): Korver is now officially a Cavalier, in a deal from Atlanta first reported on Thursday. He’s expected to come off the bench for the Cavs, but with J.R. Smith hurt, Korver won’t be hurting for PT, so could do some serious damage as the main scorer in the second unit. Although Korver has been hoisting fewer treys the last couple of seasons, that trend will probably reverse itself in Cleveland. Let the three pointers start dropping!

Tim Hardaway Jr., SG/SF, Atlanta Hawks (ESPN: 4.3 per cent; CBS: 17 per cent): Hardaway has been on fire in the last week, canning 12 treys in three games, while scoring at least 12 points in each contest. He’s getting more starts this season, and has responded with arguably the finest effort of his four-year career. But given Hardaway’s cap hit, the Hawks are looking to peddle him, so depending on where he lands, he could be in for a boost. At the very least, Atlanta is showcasing him now, beefing up his value for the time being and making him a nice waiver add for those seeking an injection of scoring and three pointers.

Willie Reed, PF/C, Miami Heat (ESPN: 5.6 per cent; CBS: 8 per cent): In two of the last three games, Reed has gone off for 22 points, adding a combined 30 rebounds, and he’d been throwing a block party even before his PT started rising, chalking up at least one rejection in nine straight games. Unfortunately, this may be a short-term add only as Hassan Whiteside (eye) could be healthy enough to return to action Sunday. But at the very least Reed, who has now appeared in nearly the same amount of games as he did during his entire rookie season with Brooklyn, has put himself on the map and earned a larger role off the bench. We also now know he’s an instant pickup candidate any time Whiteside is sidelined.

Boban Marjanovic, Detroit Pistons (ESPN: 0.5 per cent; CBS: 3 per cent): Okay, Thursday’s season-high 22 minutes for Marjanovic may have been a one-off given that Aron Baynes was hurt and both Andre Drummond and Jon Leuer got into early foul trouble. But it’s what Marjanovic did with those minutes that commands attention: how about 11 trips to the line, showing a great touch by canning nine of them? He had already put up a double-double just eight minutes into his stint and wound up with 15 points, 19 boards and a block. Wow. Marjanovic needs to be on your radar in deeper formats, and an immediate add in DFS play when Detroit’s frontcourt is dealing with any health woes.

Lucas Nogueira, Toronto Raptors (ESPN: 4.1 per cent; CBS: 17 per cent): With Patrick Patterson (knee) out and Pascal Siakam struggling, Nogueira is getting plenty of burn in the Six, playing at least 20 minutes in four straight, including 26 minutes in a start at power forward on Thursday. While Nogueira hasn’t exactly shown a scoring touch, he’s offering a bit of everything else with six boards, three assists, two blocks and a steal on Thursday. Plus, he’s not afraid to expose himself to save his team a point.

By RotoRob
Tags: Marco Belinelli, Willie Reed
This entry was posted on Saturday, January 7th, 2017 at 12:59 pm and is filed under BASKETBALL, RotoRob, The Wire Troll. You can follow any responses to this entry through the RSS 2.0 feed. Both comments and pings are currently closed.