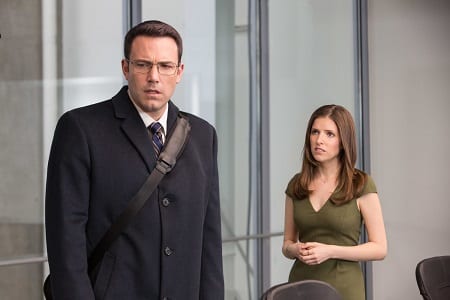 Numbers aren’t the only thing he crunches.

There have been plenty of action films involving some savant that deciphers something they shouldn’t and becomes a target of bad people only to be saved by a hero. In an interesting tweak, director Gavin O’Connor (Warrior) has made the savant the hero with The Accountant, which puts the mathematically inclined pair of Ben Affleck and Anna Kendrick in the crosshairs of a team of hired killers.

Diagnosed with autism as a child, Christian Wolff (Affleck) has an incredible talent with numbers, which — paired with an unconventional upbringing from his Spec Ops father — has made him a highly sought after forensic accountant for some of the world’s most notorious organizations. His next job is to audit a seemingly innocuous robotics firm based on a discrepancy found by an in-house accountant.

After meeting with the accountant, Dana Cummings (Kendrick), Wolff is able to analyze and isolate the issue in a single night, sparking an unlikely friendship with Cummings. Before Wolff can identify the culprit, however, the CFO dies and is fingered by the company’s founder (John Lithgow) as the culprit, thus ending the investigation.

While Wolff tries to process the inability to see his work through to completion, two hitmen show up and try to kill him. Using the years of specialized training he received growing up, Wolff is able to take them down and discover that Cummings is also a target.

As all this is going on, Treasury Agents Ray King (J.K. Simmons) and Marybeth Medina (Cynthia Addai-Robinson; Arrow) are attempting to uncover the identity of “the accountant” seen in several pictures with dubious clientele. As they close in, Wolff breaks with protocol to try to save Cummings and finish the job he started a different way.

Action sequences are cut from the same cloth as John Wick with Affleck’s strikes being very short and concise followed by immediate double taps to the skull. The “Gun Fu” approach has been used in other films since John Wick, and the magic has started to diminish a little, but it’s still a relatively fresh take on shootouts and delivers some intense moments.

Most of the parts are well acted, which is no surprise given the surprisingly accomplished cast that includes Affleck, who does a nice job at bringing Wolff’s eccentricities and struggles to life without turning into a caricature, along with Kendrick, Simmons, Lithgow, Jon Bernthal (Shane from The Walking Dead) and Jeffrey Tambor (Arrested Development).

There’s a decent plot at the heart of The Accountant, one that features a number of twists and turns along the way. There’s also a genuine tenderness to the relationship between Affleck and Kendrick, even if the latter sort of unceremoniously vanishes from the screen, and there are plenty of moral gray areas for the characters to play around in.

Based on the trailer you’d be forgiven if you expected The Accountant to be full of action. It isn’t. Sure, the pacing gives additional weight to the big fights, but it really takes a while for things to get going and even then it can get bogged down in dull exposition.

Although we mostly enjoyed the story, the whole “six degrees of separation” phenomenon is a little over the top. It’s impossible to really go into detail without giving spoilers, but the way in which the film ties the various characters’ origins into the ongoing storyline feels highly implausible and more aimed at shock value than realism.

Three featurettes with a combined run time of roughly 30 minutes comprise the entirety of the Blu-ray extras. Probably the most interesting is “The Accountant in Action,” which focuses on the choreography of the action sequences. The others deal more with Affleck’s character: one specific to him and one that focuses on his condition.

Behind strong action and a quality cast, The Accountant makes for an enjoyable film; even if it would’ve benefited from tighter pacing and fewer manufactured “aha” moments.

By HC Green
Tags: Anna Kendrick, Ben Affleck, Blu-ray reviews, The Accountant
This entry was posted on Friday, January 6th, 2017 at 4:59 pm and is filed under Herija Green, Movie Reviews. You can follow any responses to this entry through the RSS 2.0 feed. You can skip to the end and leave a response. Pinging is currently not allowed.