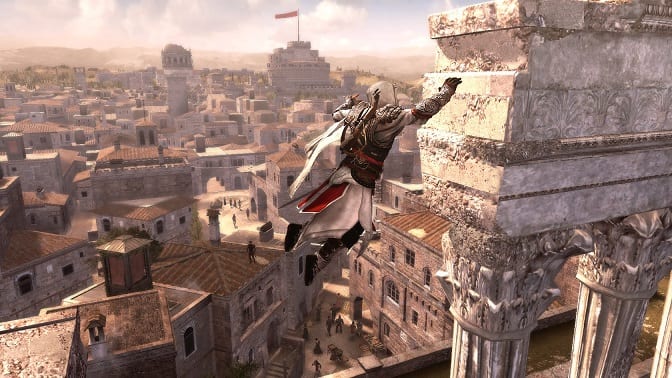 Ezio’s remaster improves environment fidelity but not the actual Assassin.

The first Assassin’s Creed sold bucket loads but was seen as a bit of a limited experience, a tech demo with repetitive gameplay, clunky controls and a boring protagonist. Assassin’s Creed 2 was a leap forward in every respect, and Ubisoft was so successful with Ezio Auditore da Firenze that he starred in two more successive games.

That trilogy was already packaged together for previous generations, but now remastered versions have arrived for the PlayStation 4 and Xbox One, filling in the (much needed) gap in annual AC releases.

One of the good/bad things about Assassin’s Creed is that the controls haven’t really changed that much between Ezio’s time and the recent adventures with the Frye twins. If you started with Evie and Jacob Frye in Syndicate, then going back to Ezio may feel slightly clunkier, but not by very much.

The biggest difference is that Ezio introduced chain combat kills, which was unfortunately dropped somewhere along the way. The parkour remains as clunky as ever (you’ll still get caught on the corner of something), but the amount of interactive environment has diminished.

None of this has been fine-tuned or upgraded, probably because the leap between AC2 and Syndicate isn’t that far. So basically, if you’re revisiting Italy with Ezio, it’s pretty much what you remember for better or worse. If you’re time-jumping back after playing Syndicate, some of the button mapping is different, but it’s still essentially the same thing.

Assassin’s Creed has always had gorgeous environments with somewhat questionable character models.
Syndicate finally corrected this and brought the Frye twins to a decent level of graphical fidelity, but time has not been kind to Ezio and his Renaissance pals.

Environments have all been upgraded (draw distances and general levels of details), but the characters look worse for wear. Ezio in particular has a weird red blotchiness to him, and unlike the Borderlands or Dishonored remasters, the characters aren’t intentionally stylized.

That being said, Ezio is perhaps the franchise’s most enjoyable character, and seeing his life progress from the ballsy young man in AC2 to the grizzled veteran of Revelations is satisfying as hell.

Not nearly as satisfying, however, is the modern-day Desmond Miles story, which has basically not existed since the end of Assassin’s Creed 3. But you’re still stuck in there, and Desmond’s gameplay takes a few hours of the overall length for each game.

Each game in this trilogy has a different focus for overall secondary gameplay. In AC2, it’s property and business management. In Brotherhood, it’s recruiting junior Assassin NPCs to be used as on-call combat squads. In Revelations, it’s the use of a zip-line across the map (replaced in Syndicate with the grapple gun) and bomb crafting.

In all three games, you can essentially ignore these side functions, though the recruiting of Brotherhood makes life much easier and allows you to strategize your infiltration while the zip-line in Revelations greatly speeds up travel.

Having played and beaten every game in the Assassin’s Creed series, we’ve always felt that the Ezio trilogy, despite the games’ technical limitations, hit that right balance between open world exploration and overstuffed collectible side crap — something that really increased starting with Assassin’s Creed 3.

Revisiting these in the remaster, they still do remain the most well-balanced, and Ezio’s ability to make chain kills in combat really helps the repetition of some of the larger fights.

It’s a shame that the unique multiplayer modes of Brotherhood and Revelations aren’t included, as they are still one of the most different and stressful (in a good way) multiplayer experiences we’ve seen over the past decade.

Despite being remasters, Assassin’s Creed: The Ezio Collection has shown its age due to technical issues. On the other hand, this trilogy probably has Assassin Creed’s strongest story and character development, and the overall clunkiness isn’t much different than Syndicate.

If you’ve never played as Ezio and enjoyed Syndicate, it’s worth your time to dig deeper into the series’ lore. However, there’s no real need for legacy players to come back to Renaissance Italy unless they’ve already ditched their previous-generation copies.