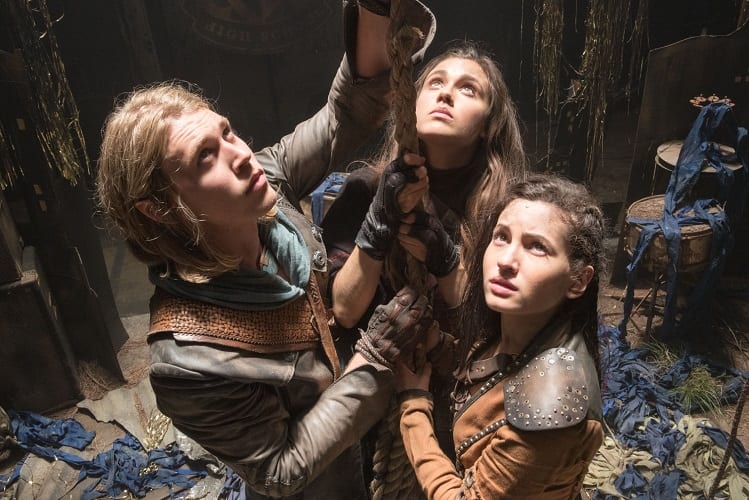 In the “me, too” world of entertainment, it’s no surprise that networks look for ways to tap into the phenomenon HBO created with Game of Thrones. While clearly the level of violence (and nudity) would never fly on cable, the premise could, at least theoretically, be duplicated: tap into a rich fantasy world and create compelling television from it.

To that end, MTV dove in earlier this year with The Shannara Chronicles, a 10-episode inaugural season based on the long-running Shannara book series written by Terry Brooks — drawing most directly from 1982’s The Elfstones of Shannara. Was it a success? Let’s find out.

Tending for the Ellcrys are the “chosen,” an ever-changing group of young elves that serves for a term of one year before new representatives are selected. This year, Amberle (Poppy Drayton) becomes the first woman to take the trials. Shortly after she successfully completes them, the Ellcrys starts to wither and leaves begin to fall.

This prompts a visit from the druid Allanon (Manu Bennett) to King Eventine (John Rhys-Davies) to inform him that the tree is dying — something both know to mean the return of the demons, led by the Dagda Mor. When the other “chosen” are slaughtered, Allanon sends Amberle on a journey to save the Ellcrys before the demons can fully return to the world.

She is accompanied by Wil Ohmsford (Austin Butler), a half-human, half-elf that is the son of a great hero and the last of the Shannara bloodline, and Eretria (Ivana Baquero), a human thief. The series focuses on their journey to prevent a demon apocalypse.

Filmed in New Zealand, Shannara is visually impressive. Granted, the CGI can be a little uneven, as there were certainly budget restrictions, but the natural beauty creates a fantasy vibe — which is why it was used to help bring Middle-Earth to life. The glimpses of our former world (the story takes place in the remnants of the western United States) are usually well implemented.

Acting is uneven to say the least, but there are some notable efforts. Rhys-Davies is a pro’s pro in a fairly small role, and early on it’s evident that Bennett is the series’ best character as Allanon. Baquero is the best of the three young stars, while Drayton starts slow as Amberle but picks up as things progress. Butler is pretty bland throughout.

There’s a healthy amount of action, and though it’s of the PG-13 variety, it’s still solid enough. The Dagda Mor doesn’t bring much to the table in terms of personality, but he has a legitimately creepy look and holds down the fort as the show’s antagonist.

In what was doubtless a concession to MTV’s younger audience, Shannara has some pretty hokey romantic scenes shoehorned in that seem squarely aimed at the Twilight crowd. And unless you’re a teen, that whole teen angst drama stuff rarely plays well — and lest you forget, this is based on a book from 30-plus years ago, so there figures to be a rather broad demographic.

There’s a very odd blend of dialogue with prophetic fantasy babble juxtaposed with contemporary quips that’d seem more at home on something set in high school. Not everything is clunky, but the jumps back and forth between the way Allanon talks versus Eretria can be pretty jarring. Improvement here would go a long way toward keeping the vibe cohesive.

While there are plenty of smaller nitpicks, two other things stuck out. First, it seemed like our intrepid heroes were constantly falling into a trap. Shouldn’t they eventually become savvier? And second, James Remar is just awful as Cepholo, Eretria’s surrogate father. We’ve seen him do fine in other roles. Here, though, it’s excruciating.

There is a handful of additional materials, including a brief interview with Brooks, but from the way they’re presented we’re guessing they were produced to air on MTV before the show debuted, so it appears nothing was specifically created for the release.

Although not great, the first season of The Shannara Chronicles does a respectable job of world building and juggling two primary plotlines without overwhelming those of us that had little to no familiarity with the source material. Now they just need to do something about that script for Season 2.

By HC Green
Tags: Blu-ray reviews, Game of Thrones, HBO, Season 1, The Shannara Chronicles
This entry was posted on Monday, December 12th, 2016 at 8:24 pm and is filed under Herija Green, Movie Reviews. You can follow any responses to this entry through the RSS 2.0 feed. Both comments and pings are currently closed.