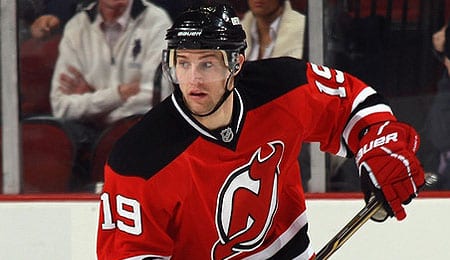 Travis Zajac is currently piling up the points. (Heshootshescores91.blogspot.com)

It’s another exciting week of Fantasy hockey! How’s your team doing? We hope we’ve been of help so far and now we’ve got a few players this week that might put your team over the top.

Travis Zajac, C, New Jersey Devils (ESPN: 29.7 per cent; Yahoo: 19 per cent): Zajac has never really lived up to the title of franchise player that fell to him with the departure of Zach Parise. That said, Zajac hasn’t been all that terrible, and would be a smart Fantasy pick-up at this juncture. The Devils pivot had three goals, five points, two power play points and nine shots on goal in three games last week. He has eight goals and 20 points on the season, which are both pretty solid figures at this stage. And he’s not afraid to take on some tough customers, even if he doesn’t always fare well with the gloves off (see video below).

Bryan Little, C, Winnipeg Jets (ESPN: 36.1 per cent; Yahoo: 30 per cent): Recently returned from injury, Little is someone yu may want to jump on now. Since making his season debut just a few days ago, he has two goals, four points, a plus-4 rating and eight shots on goal in three games. Considering he’ll be spending considerable time alongside such names as Blake Wheeler, Mark Scheifele and Calder favourite Patrik Laine — yeah — Little might be your waiver wire steal of the season.

Viktor Stalberg, LW/RW, Carolina Hurricanes (ESPN: 2.7 per cent; Yahoo: 3 per cent): Stalberg has always been more of a “meat and potatoes” role player, but could the offense be coming to life for him? Maybe. He has just seven goals on the season, but he potted four of them last week. Proceed with caution.

Ian Cole, D, Pittsburgh Penguins (ESPN: 4.2 per cent; Yahoo: 5 per cent): Cole is known more as a shutdown defensive rear guard. He doesn’t put up too many points, but is a key player on the Pens’ blue line. Last week, Cole also showed flashes of offensive potential, leading all NHL defensemen with a goal, five points, a plus-6 rating, five shots on goal and five defensive points (depending on your Fantasy league’s format). He’ll do as a spot starter off the pine.

Kari Lehtonen, G, Dallas Stars (ESPN: 16 per cent; Yahoo: 34 per cent): If you were to rank NHL teams according to how good their goaltending tandems were, Dallas would probably be ranked anywhere from 25th to 31st. No, that’s not a typo, and we’re not joking. That said, Lehtonen is coming off a pretty solid week with a win, a 1.02 goals against average, a .952 save percentage and a shutout in two starts. He’s not a Fantasy No. 1, but he’ll do as a No. 2/3.

You know him, we love him, our NHL Editor wants his rookie card — this week’s honours go to Patrik Laine. The hottest pure goal scorer to enter the league since Alex Ovechkin, Laine furthered padded his lead in the rookie race with four goals, five points, a plus-1 rating, two power play points and 14 shots on goal. His 23 points in 27 games lead all NHL rookies, and his 16 goals are tied with Sidney Crosby for the league lead. Amazing.

By Dakota Case
Tags: Bryan Little, Patrik Laine, Travis Zajac
This entry was posted on Sunday, December 4th, 2016 at 7:33 pm and is filed under Dakota Case, HOCKEY, The Wire Troll. You can follow any responses to this entry through the RSS 2.0 feed. Both comments and pings are currently closed.