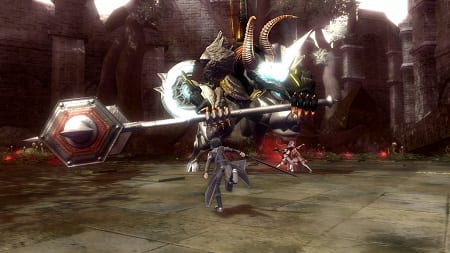 Sword Art Online: Hollow Realization is the latest game in the popular anime and game series. It asks players to step into a faux Massively Multiplayer Online (MMO), but it often feels like it embraces the worst aspects of the genre.

At its core, Sword Art Online: Hollow Realization is a fairly simple game to play. Players will spend a lot of time in combat mashing the square button for their basic combo attacks, with the occasional special ability to stagger an enemy. This gets repetitive fairly quickly, though it can offer some mindless fun.

You’re frequently partnered up with friendly A.I. that can really sour the experience, though, as it is annoying to command and control, and it will get itself killed fairly easily. That will make some boss fights drag on considerably.

Designed for both the PS4 and PS Vita, Hollow Realization is pretty modest when it comes to visual design. Areas are often bland, though character and enemy designs aren’t too shabby, mostly being faithfully translated from their 2D origins. Performance is often frustratingly poor on the Vita version, so if you have a choice, grab it on the PS4.

There is a lot of dialogue in the game, and it is almost totally voiced. That being said, quantity does not always equal quality, and some of the performances will probably only impress the hardcore of the series’ fan base. Music is good if a bit typical, and sound effects work pretty we as force feedback during combat scenarios, far more so than the sometimes disconnected visuals.

The series originally began as a sort of death game, with players all being trapped in Aincrad, where death in the game meant death in real life. This being a new tour through the area though, the death game is not present, and thus it becomes just another generic fantasy setting to trudge through.

Fans of the anime will likely find a lot of stuff to like about the game, from the large cast of characters to being able to visit locations that were only briefly explored before. Newcomers, meanwhile, may have trouble with the game relying on callbacks and not really attempting to offer much explanation of the game’s worlds.

This is especially apparent in the game’s odd pacing. The actual story setup is decent, involving a seemingly self-aware NPC being hunted down by the game itself and other players. However, this thread is often placed on the back-burner in favour of inane conversations about a variety of random topics. Your goals can be as simple as going to a specific spot for sightseeing or spending time with Kirito’s friends, many of whom are fairly grating.

Being set as a futuristic MMO, Hollow Realization sees fit to emulate MMOs, often frustratingly so. The interface is ugly and crowded with unneeded information. Quests feel extremely basic, though their simple enemy grind at least provides refuge from the frequent story interruptions.

Combat can feel pretty fast and fluid when you’re in the zone against normal enemies, and while bosses can impress with their size and theatrics, they often end up being the most annoying to fight thanks to poor party A.I.

Sword Art Online: Hollow Realization offers some solid hack n’ slash fun, but it’s really only going to appeal to those that have loved the show and the various games over the years. The base is there for a great game, though the number of games that have already been released under the SAO banner suggests the developers are fine with treading water.

By Brian Gunn
Tags: Bandai Namco, Sword Art Online, Sword Art Online: Hollow Realization, Video Game Review
This entry was posted on Friday, December 2nd, 2016 at 2:42 pm and is filed under Brian Gunn, Video Game Reviews. You can follow any responses to this entry through the RSS 2.0 feed. You can skip to the end and leave a response. Pinging is currently not allowed.