The Wire Troll: C.J. Goes the Extra “Miles” in Indiana 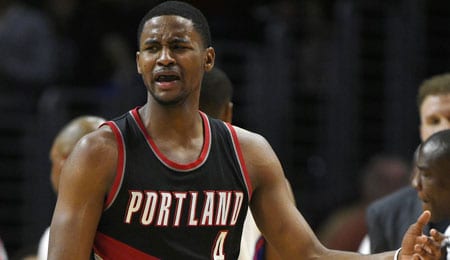 This week, Stephen Curry set a new record for most three pointers made in a game (13); LeBron James became the youngest player to notch 27,000 career points; and the 76ers earned their first pre-December win in three years — progress!

We hope this week’s Fantasy basketball waiver wire choices help you earn your first pre-December win if you haven’t already won. And if you haven’t won yet, chances are you haven’t been listening to us. Wrong choice, my peeps!

Nick Young, SG/SF, Los Angeles Lakers (ESPN: 28.2 per cent; CBS: 40 per cent): The old guy on the Lakers is reminding us he can score, going off for 22 on Sunday and then adding 20 in just 29 minutes on Tuesday. Young is seeing more minutes lately, and his shooting touch has been off the charts — even from downtown. The Lakers actually have a few guards that can put the ball in the hoop, but Young’s ability to do so consistently makes him an attractive target if your team needs a boost in this department.

Josh Richardson, SG, Miami Heat (ESPN: 3.4 per cent; CBS: 37 per cent): Richardson just returned from a torn MCL a week and change ago, so he’s still getting up to speed, but based on his performance Thursday (16 points, four treys), he’s ready to rock. Miami needs someone that can score, so expect him to see more and more responsibility going forward. Smart owners will strike while they can because this kid’s long-term prospects are rosy.

C.J. Miles, SF, Indiana Pacers (ESPN: 32.9 per cent; CBS: 48 per cent): Miles has recalibrated his game beyond the perimeter — at least enough to land a starting role on Friday against the 76ers. He’s starting to log more minutes which can easily translate into more production. People are starting to take notice as Miles almost supports a 50 per cent ownership rate on CBS, so boost your squad’s three pointers and scoring now. Given that he’s a bit of a sleeper still, he also makes a nice DFS play for Saturday.

Maurice Harkless, SF, Portland Trail Blazers (ESPN: 15.8 per cent; CBS: 35 per cent): With teammate Al-Farouq Aminu (calf) out), this opens up a new workload for Harkless at the power forward spot. Capable of contributing all around the stat sheet, Harkless should be a great supporting cast to your three point shooting and point scoring categories, and showed what he’s capable of on Tuesday (see video below). At the very least, he’ll be an awesome DFS option Thursday in Houston considering how many points the Rockets tend to give up.

Lucas Nogueira, Toronto Raptors (ESPN: 2 per cent; CBS: 5 per cent): Nogueira basically mirrored his performance in his last two games notching 10 points, seven rebounds, two blocks, an assist and a steal — with the difference an extra steal in the game prior to his last. If this isn’t an early sign of consistency potential, we don’t know what is. This seven-footer is doing a good job as a temporary fill in for Jonas Valancuinas (knee), and he’s outperforming rookie Jakob Poeltl — the Raps’ top pick in this draft this year.

Kelly Olynyk, Boston Celtics (ESPN: 3.5 per cent; CBS: 22 per cent): After missing the start of the season because of offseason shoulder surgery, Olynyk returned Wednesday and then went off in a starting role in Friday’s win over the Knicks, registering 19 points, seven boards, three assists and a steal. With Al Horford (concussion) out, Olynyk will look to the power of his head tie to take advantage of the floor, and potentially offer your team a good — and versatile — deep-format big man.

By Adrian Wallace
Tags: C.J. Miles
This entry was posted on Saturday, November 12th, 2016 at 3:26 pm and is filed under Adrian Wallace, BASKETBALL, The Wire Troll. You can follow any responses to this entry through the RSS 2.0 feed. Both comments and pings are currently closed.