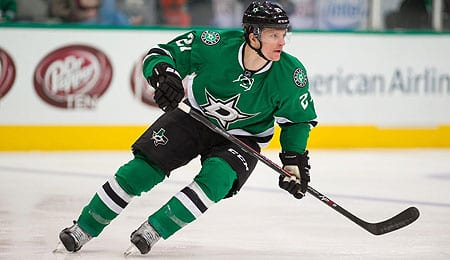 Antoine Roussel is heating up on the scoresheet. (The Hockey Writers)

We’re a month into the season, and things are starting to get back to normal around the league. Edmonton still leads the Pacific Division, but Chicago is back on top of the Western Conference once again. Montreal has also recovered nicely from that 10-0 drubbing by Columbus a week ago, but that’s what happens when Carey Price is back in net.

Last week also saw the first Sidney Crosby–Connor McDavid showdown. McDavid blanked Crosby three points to zip, but it was Pittsburgh that came out on top 4-3. So… do we call that a draw then? Let’s get to this week’s Fantasy hockey waiver wire picks.

Antoine Roussel, LW,  Dallas Stars (ESPN: 15.6 per cent; Yahoo: 26 per cent): Roussel had quite the week. The Stars agitator put up two goals, five points, three power play points, eight shots on goal and 18 penalty minutes. Like we said, he’s a little rough around the edges… but is the first to step up for his star teammates when necessary (see video below).

Jordan Staal, C/LW, Carolina Hurricanes (ESPN: 43.1 per cent; Yahoo: 19 per cent): Considered to be “day-to-day” with an injury, Staal is still one to keep an eye on. The former Penguin has developed quite the chemistry with young Finns Sebastian Aho and Teuvo Teravainen, and put up two goals, six points, a plus-1 rating, two power play points and 15 shots on goal last week. Staal also hit the 400-point mark in that span, so congrats to him.

Teuvo Teravainen, LW/RW, Carolina Hurricanes (ESPN: 10.5 per cent; Yahoo: 15 per cent): The former Chicago Blackhawk seems to be doing just fine with the ‘Canes. Staal is a proven vet, and Aho has clearly brought his talent across the Atlantic with him, making it an easy transition for Teravainen. Teravainen had two goals, five points, a plus-1 rating, a power play point, a game-winning goal and 11 shots on goal in four games last week.

Charlie Coyle, C/LW/RW, Minnesota Wild (ESPN: 26.4 per cent; Yahoo: 24 per cent): Don’t look now, but Minnesota may finally have one of the more productive top lines in the league. Eric Staal has looked rejuvenated with the Wild, collecting 12 points in 13 games, but his linemates have been good, too. Coyle has been the one constant on Staal’s right, and is proving himself to be the team’s top line RW of the present and future. Coyle had a goal, three points, a plus-2 rating, a power play point and six shots on goal in two games.

Keith Kinkaid, G, New Jersey Devils (ESPN: 2.8 per cent; Yahoo: 3 per cent): Cory Schneider is the main man in New Jersey, but he’s got a pretty solid backup. In two appearances last week, Kinkaid collected a pair of wins, a 1.00 goals against average and a .967 save percentage. Most Fantasy hockey formats employ the use of two starting netminders. It is darn near impossible to find a No. 2 starter on the waiver wire, so most of our goalie recommendations are for your bench. This one is no different. He won’t see a lot of time, but he could be a good third option.

Move over Alex Ovechkin — there’s a new world class sniper in town! Winnipeg rookie Patrik Laine has been a breath of fresh air for the Jets faithful, reminding many of another Finnish rookie that took the ‘Peg by storm decades ago. Last week, the 2016 second overall pick potted four goals, six points, a plus-4 rating, two penalty minutes, two power play points and eight shots on goal.

Laine paces the league with 11 goals, and has 16 points through 16 games. We predicted the monstrous 6’5″ winger would lead all rookies with around 35 goals at the start of the season. He could put up over 50 if he keeps up his current pace.

By Dakota Case
Tags: Jordan Staal, NHL
This entry was posted on Sunday, November 13th, 2016 at 5:59 pm and is filed under Dakota Case, HOCKEY, The Wire Troll. You can follow any responses to this entry through the RSS 2.0 feed. Both comments and pings are currently closed.