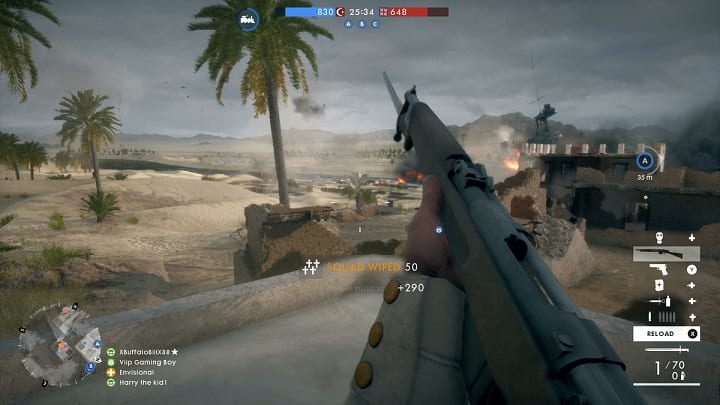 Ugh, did you even wipe your Squad?

Are you tired of the modern/futuristic shooters from the past infinity years? So were the folks at DICE, who have dropped Battlefield 1 onto the market like an artillery shell. Set in World War I, you’ll fight in trenches and in the air. You’ll fight in the bloodiest war in history and sometimes it’s terrifying.

Like previous games in the series, Battlefield 1 truly wants to be played. There’s a completely daunting list of customizable options in place to make sure the game is as comfortable as possible for you. For a small example, you can fine tune your sensitivity per zoom level, so if you need a bit of extra speed while looking down a 10x scope, you can crank it up.

Battlefield 1’s default setup is straightforward, and that’s not bad at all. Beyond the basics, the d-pad houses items like ammo boxes or binoculars, as well as the gas mask. To communicate with your team you can hold down R1 and use the right stick to highlight verbal orders or requests, but you can also tap R1 while highlighting an enemy to “spot them” for your team.

Sometimes there’s an issue when attempting to mantle over or onto certain objects using the jump button. This has been an issue for quite a long time in Battlefield games, so our advice is that if you flub a jump, immediately run away and try a different spot because nothing is more embarrassing than being killed while failing multiple times in a row.

Controlling tanks and airplanes is easy to pick up on, thanks to a wonderfully structured campaign that eases players into areas that may be outside their comfort zone. Vehicles also have alternative loadouts and functions that can be accessed using the d-pad, so pay attention to your HUD while in the driver’s seat.

Are bombers and attack planes giving your ground forces grief? Look off to the horizon and see if any fog is rolling in and plan accordingly.

Soldiers from the various empires like Ottoman or English all have era-appropriate apparel and equipment, and they all interact with their environments quite believably — whether you’re watching someone mantle over a fallen log or manning an anti-air flak cannon.

Things usually run at a nice, brisk framerate due to an ever-changing resolution swap that happens on the fly, though they can drop down noticeably during the most intense engagements.

Sound design in Battlefield 1 is worth cursing over, but we’ll take the high road and say that war is hell, and your ears are going to be plunging deep into the depths. See in WWI, semi- and automatic weapons weren’t perfected and it lead to a lot of crude designs and even cruder sounds.

Tanks chug along like they’re barely working, gears churning with a deep diesel rumble, and machine guns all have a nice weight to their firing sequences because most are just chunks of metal slapped together. You have the option to convert spoken foreign languages to English, or leave it native to aid the atmosphere. We also heard every single Wilhelm Scream, so there’s that, too.

Traditionally, Battlefield games have focused on multiplayer, but DICE seems to be trying to change that a little bit. What results is Battlefield 1’s campaign, an emotional experience that not only tells breathtaking stories of World War I that feature memorable characters, but also eases the player into gameplay situations they might be unfamiliar with.

Originally the flight aspect of Battlefield games was a turn-off for some of us, but the characters we met and situations we were put through as a pilot in the campaign made us hungry wannabe Barons of the sky. And just wait to see just what things you get to fly.

Then there’s the multiplayer portion of Battlefield 1, which offers no short supply of game types (and many more to come in the next year) with the inclusion of a few new modes. The expected Conquest, Rush and Dominion modes are in, but the new mode Operations that DICE has conceived is quite a treat and is likely to be something we see evolve wildly in the future.

In an Operation, you play a series of missions in which every player shares the same objective. This generally leads to 64 players battling on the frontlines in muddy, gas-filled trench battles where doing anything but laying down might get you killed. The attacking team tries to claim an objective while the defenders obviously try to stop that from happening. As it stands right now, however, defenders usually have a lot of advantages and end up winning.

Battlefield 1 has a remarkable campaign that rivals the greatness that was Bad Company 1 & 2, and a brave new set of multiplayer options to get your boots muddy, reaffirming its place as the best multiplayer shooter on the market.