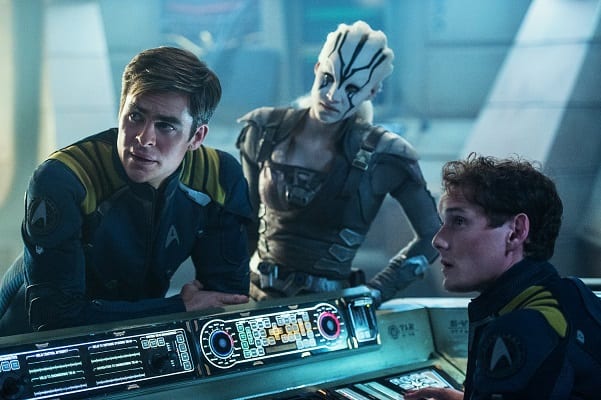 What do you mean the Enterprise blew up again?

There’s little doubt J.J. Abrams has had the Midas touch when it comes to rebooting franchises: Mission Impossible, Star Trek and, most recently, Star Wars. After personally directing the first two films in the Gene Roddenberry franchise, Abrams moves to the producer’s chair and hands directorial duties over to Justin Lin, who is best known for his work on the Fast & Furious series, for Star Trek Beyond.

Now at the midpoint of their five-year mission, the crew of the Enterprise seems to be drifting in their own directions.
Captain Kirk (Chris Pine) has grown weary of exploration and plans to take on a role as Vice Admiral at the massive space station Yorktown. Spock (Zachary Quinto), having learned of the death of his future self, intends to leave the Federation to aid the Vulcan people.

Before any of that can happen, however, an unknown ship enters Federation space looking for help after their ship crashed in an uncharted nebula nearby. The Enterprise is dispatched, but the distress call was a trap, leading them into an ambush by a previously unknown foe. The ship is destroyed with ease, scattering the crew onto the planet’s surface below. Some are captured, while others are left to try to regroup.

At the heart of the conflict is an alien artifact with highly destructive properties that the aggressors seek. As crew members pair up on the planet, we are introduced to Jaylah (Sofia Boutella; Kingsman), an alien that has been marooned there for years and has been repairing a derelict Federation vessel in hopes of escape. Now the crew must rally together to survive this ordeal and prevent their captors from obtaining and using the weapon of mass destruction.

Although the original series was heavy on exploration, the movie franchise has done a good job of throttling up the combat. That’s the case once again here, and the action sequences, whether on land or in space, are well choreographed and engaging. The initial encounter between the Enterprise and the pulsating mass of ships that comprise the enemy force is particularly impressive from a technical standpoint.

Splitting the crew into different pairings — Spock and McCoy (Karl Urban), Kirk and Chekov (Anton Yelchin), Uhura (Zoe Saldana) and Sulu (John Cho) — allow more screen time for various characters after Kirk and Spock were heavily featured in the last film. And while some of those arcs are more interesting than others, it’s still good to see some growth in the modern version of these characters.

Jaylah is a nice addition to the cast. Her overall look is really cool, and the way she fights and carries herself makes us hope there’s a returning slot for her. It’d help to add some new characters into the mix as this incarnation of the franchise continues to diversify itself from the original.

This is more a big picture complaint, but can we make it through a film without the Enterprise blowing up? At some point we need to stop being told what an amazing leader Captain Kirk is and actually see it for ourselves. Every film has been marked by catastrophic missteps and then salvaging the remnants, but Kirk seems to lose the majority of his crew every time out. Even the throwaway mission to start the film ends in abject failure.

While we mentioned the impressiveness of the combat, it feels like the scales have tipped too far in that direction at the expense of nonviolent alternatives and exploration. The Enterprise is reduced to a barely used plot device here, and the amount of the film that takes place on the planet seems out of place for a space-driven franchise.

There’s a healthy selection of bonus materials here, most of which is devoted to showing you how various elements were created. They’re fine if that sort of thing interests you, but we tend to be the types that don’t want to know how the sausage was made. A couple of deleted scenes are present as well, though they offer little of substance.

A touching farewell to Leonard Nimoy and Anton Yelchin, both of whom passed away before the release of the film, is included. It’s sad to think how few of the originals remain, and the Yelchin tragedy is akin to Paul Walker’s passing, making it hard to watch the movie without thinking about it.

While Star Trek Beyond is an enjoyable film, there are times when it feels like it strays too far from the subject material. We hope the next movie scales it back a bit and rediscovers a better balance between action and the franchise’s foundation.

By HC Green
Tags: Blu-ray reviews, Chris Pine, J.J. Abrams, Movie Review, Star Trek, Star Trek Beyond
This entry was posted on Tuesday, November 1st, 2016 at 5:02 pm and is filed under Herija Green, Movie Reviews. You can follow any responses to this entry through the RSS 2.0 feed. Both comments and pings are currently closed.