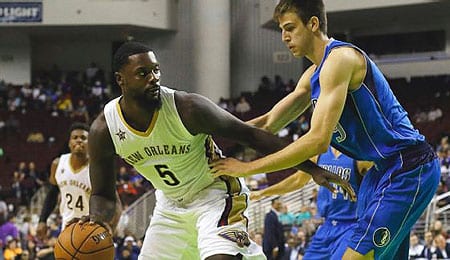 Lance Stephenson (left) is getting plenty of burn off the bench. (ESPN.com)

Welcome back to another season of Fantasy basketball as once again we roll out the ever popular Wire Troll, our weekly column of waiver wire recommendations. As always, to qualify, players must be available in at least half of ESPN and CBS leagues. This season’s column will again be penned by RotoRob.com NBA Editor Adrian Wallace, but he’s tied up for opening week, leaving the duties to your trusty site editor.

This week, Dwyane Wade made a douchebag move and got fined for it; New Hawk Dwight Howard made an immediate impact on the boards the likes of which Atlanta hasn’t seen in some time; and Sacramento’s new home arena produced results consistent with its old building (i.e., another loss in its home opener).

Lance Stephenson, SG, New Orleans Pelicans (ESPN: 7.3 per cent; CBS: 14 per cent): The Pelican bench offers a couple of nuggets this week as Stephenson is getting plenty of minutes early on and really responded Friday with a huge effort, doing everything but getting steals and blocks. With the New Orleans backcourt dealing with injuries, he’s a nice early-season option — especially when the team goes small. By the way, if you recall what Stephenson did to LeBron James in the playoffs a couple of years ago, you’ll note that he still has a knack of pissing off superstars (see video below).

Tim Hardaway Jr., SG/SF, Atlanta Hawks (ESPN: 2.7 per cent; CBS: 13 per cent): Hardaway looked like a serious force off the Hawk bench in the season opener, going off for 12 of his 21 points in the fourth quarter to spur Atlanta to a win. He canned a trio of treys, but didn’t contribute much in the way of peripheral stats. Still, if you need some early-season scoring, give him a look — especially with a date against woeful Philadelphia on tap on Saturday.

Dante Cunningham, SF/PF, New Orleans Pelicans (ESPN: 0.4 per cent; CBS: unowned): After seeing limited minutes in the season opener, Cunningham found himself starting the second half on Friday and wound up shooting very well while coming within a couple boards of a double-double. He also nailed three treys and had a couple of blocks. Last November, we recommended Cunningham as a flier or DFS pick, and he did wind up paying off in daily formats. If the minutes remain high like on Friday — and they likely will come close when the Pelicans need a more up tempo lineup — he makes for a great plug ‘n play matchup-based option.

Jon Leuer, PF, Detroit Pistons (ESPN: 0.6 per cent; CBS: 3 per cent): Here’s another big off the bench that is providing early-season value. Leuer has flirted with a double-double in both games so far, nailing a trey in each and adding two blocks on Friday. The move to Detroit looks like it will be a good thing for this veteran journeyman as he’s seeing more PT than ever before, and make continue to do so — especially if he continues to surprise us with his defensive play.

Tyson Chandler, Phoenix Suns (ESPN: 9.9 per cent; CBS: 44 per cent): Ho hum. Wily old vet Chandler has double-digit rebounds in each of his first two games this season. The young Suns will desperately need his defensive presence, so it’s not a huge shock he saw heavy minutes in Friday’s OT loss. He won’t see that much PT every game, but as long as his body can hold up, Chandler will be a rebounding machine while enjoying a stellar FG percentage.

Dewayne Dedmon, San Antonio Spurs (ESPN: 2 per cent; CBS: 6 per cent): Dedmon’s defensive efforts off the bench are proving invaluable for the Spurs. All he did Thursday was go off for 12 points (on 5-of-6 shooting) with seven boards and four blocks. If Dedmon hadn’t gotten in some foul trouble, he might have had an even bigger night. The Spurs have always had a knack for producing unlikely value, and this could be the latest example.

By RotoRob
Tags: Dante Cunningham
This entry was posted on Saturday, October 29th, 2016 at 2:58 pm and is filed under BASKETBALL, RotoRob, The Wire Troll. You can follow any responses to this entry through the RSS 2.0 feed. Both comments and pings are currently closed.