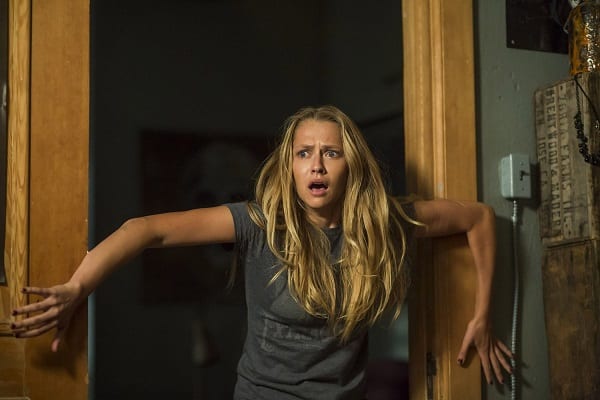 Originally conceived as a three-minute short back in 2013, Lights Out represents the full-length feature debut of director David F. Sanberg. While you’re sure to recognize some of the players — an aged Maria Bello (A History of Violence), Teresa Palmer (Warm Bodies) — there aren’t any big names, meaning its success depends on stretching that small snippet of an idea into a theatrical release.

After the grisly murder of her stepfather, Rebecca (Palmer), who moved out years ago, is called to the school of her brother, Martin, because he keeps falling asleep in class. She’s greeted by someone from child services that has questions about their mother, Sophie (Bello). Believing that her mother is simply suffering from depression, Rebecca takes Martin to sleep at her house for a night.

There’s a lot more than mental health issues going on, however, as during the night Rebecca awakens to find someone hunched over and scratching on the floor. When she turns on the light, the figure disappears, and when the lights go off it returns. This triggers repressed memories from her own childhood relating to a shadowy figure named Diana, whose name she finds etched into the floor.

Realizing that this creature is now tormenting her brother, and is likely responsible for the death of her stepfather, Rebecca resolves to help by investigating Diana’s origins. With her mother seemingly complicit in Diana’s actions, can Rebecca find out how to stop this creature before it kills her, or someone she loves?

Operating off the “less is more” philosophy, Sanberg keeps Diana’s appearances to brief shadowy outlines, frequently in the distance. This proves to be an effective tool as it’s suitably creepy to only have a rough idea of what’s stalking people. He does eventually offer more direct looks at her, and though it loses some of the impact, she’s still pretty nasty.

There isn’t a lot of wasted down time in Lights Out. It runs less than 80 minutes, which is just fine here given the film is heavy on ambiance and light on story. Most of the performances are pretty good, and between the characters and the settings there’s no shortage of suspenseful moments. Those scares are amplified by a smart use of silence and ambient sound.

Even though 80 minutes doesn’t sound like much, keep in mind this was adapted from something that was less than three. So we’re sure Sanberg had to take Diana and her ability to only appear in darkness and formulate a story around that. What they came up with isn’t good. The mental institute back story is as cliché as it gets, and the “twists” are easy to see coming.

Sanberg also struggles to provide any kind of explanation as to what Diana is. It’s hard to get too into it without revealing plot points, but the gist is that she could “get inside people’s heads” and her very existence is tied to someone else. Okay, except that she is apparently free to roam the world without that person being around… and if she vanishes when light comes on how could it be used as a weapon? And if she’s an apparition how can she hurt people? And yeah… we have some questions.

Lights Out is also littered with stuff that was taught in Horror Movies 101, like the mysterious room full of files and old audio recordings or the horrendous decision making from the protagonists — oh yeah, we’re in a house with a homicidal poltergeist but by all means let’s sleep in separate rooms. Let’s not even talk about Diana’s childish drawing in the flashback. It’s a little much.

Although there are no featurettes, a trio of deleted scenes accompanies the release. While the first two add just a little more back story as Rebecca works out the mystery of Diana, the last one is a sizeable bit that is set after the credits roll on the theatrical release. It removes any ambiguity from the film’s final moments, but at the same time it renders a sacrifice moot, which is likely why it was cut.

Buoyed by a creepy tormenter, Lights Out manages to pack some legitimate scares. Unfortunately, the paint-by-numbers story and set pieces will have you rolling your eyes instead of covering them.

By HC Green
Tags: Blu-ray reviews, Lights Out, Movie Review
This entry was posted on Monday, October 24th, 2016 at 3:53 am and is filed under Herija Green, Movie Reviews. You can follow any responses to this entry through the RSS 2.0 feed. Both comments and pings are currently closed.