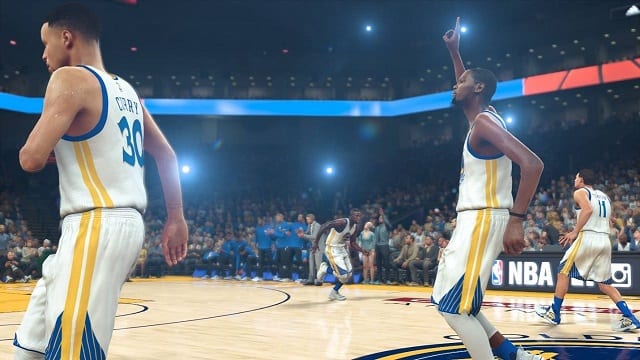 After years of annually reviewing the NBA 2k series, we actually haven’t had the chance to take it for a spin since it made the jump to next-gen consoles. Until now, that is, as we’ve been putting NBA 2k17, which launched last month, through its paces for weeks in anticipation of the start of another NBA season. With the league tipping off Tuesday it’s time to find out how NBA 2k17 fared.

While many things have changed since we last covered NBA 2k, the controls were instantly familiar, retaining the same complexities of many previous entries. Relative to pretty much any other sports game — with the possible exception of EA’s UFC series — NBA 2k17 is incredibly difficult to master because it strives to put so many options in your hands.

In that way, NBA 2k17 is not unlike a fighting game because there are so many combinations of the analog sticks to pull off different moves off the dribble. Then you add modifiers via the triggers, different functions for tapping a button versus holding it and elaborate on-the-fly play-calling and it’s easy to lose track of all the moves at your disposal.

For long-time fans that have mastered this setup, it’s undoubtedly liberating to be able to break down an opponent off the dribble, draw two defenders into the air and slip a pass to a cutting teammate for a two-hand jam. For beginners, however, it can be overwhelming, leading to a more simplistic version in which they try to get by on basics. It’d be nice if 2k found a happy medium for those that don’t fit neatly into either camp.

Mechanical issues aside, watching the game of basketball be simulated is a delight. The A.I. reacts in proper ways most of the time (minus those choreographed double teams), and the amount of idly dribbling the ball has decreased markedly since last we played. Non-icon passing seems to go to the proper man more often, and allowing you to decide between chest and bounce passes is nice.

Shooting, the lifeblood of any NBA game, feels tight whether you’re using the right analog stick, which allows for more types of shots (fade away, bank, etc.), or the face buttons. The timing meter below your players is unobtrusive but still valuable, and you know when it turns green there’s a swish incoming. All in all, NBA 2k17 plays a damn fine game of hoops.

In terms of presentation, NBA 2k17 takes a backseat to no one. There’s the studio show with Ernie Johnson, Kenny Smith and Shaquille O’Neal, courtside updates with David Aldridge, in-game interviews with players, “listen ins” on coaches in the huddle, pertinent overlays and just about anything else you can think of that appears in an NBA broadcast. The attention to detail is superb.

Perhaps nowhere does that shine more brightly than on commentary in which the game actually uses more than one set of voices behind the announce table. Yes, Kevin Harlan always does play-by-play and Greg Anthony is the lead analyst, but they’ll rotate in the likes of Chris Webber, Doris Burke and more to keep things from getting stale. It’s the gold standard for video game announcing.

Animations are typically smooth, though they can’t seem to completely stamp out some occasional wonkiness — e.g., elongated moves that send a player dribbling directly out of bounds or a defender losing track of the opponent he’s covering because a steal animation queued up too late. Still, from a distance it’s lifelike enough to make you think you might be watching the real thing.

Your story begins as a top high-school recruit, follows your brief “one-and-done” college career and propels you into the NBA where you’ll continue a relationship with scripted teammates, one of which is played by Michael B. Jordan. It’s fine to have some context, but the story sequences often meander and cannot be skipped, which can be annoying when you just want to play some basketball.

There’s a lot of grind to MyCareer — team practices, open gym, promotional appearances, texting with your agent, mom, teammates and so on — and the pay out in tokens is modest compared to how much it costs to develop your player. Clearly upgrades need to be metered out, though the dangle of huge chunks of tokens for real money feels like it played a factor in the pacing as well.

MyGM, however, is the best franchise management mode we’ve seen on consoles, making us hearken back to PC-based simulators. It’s not just assembling a roster, doling out minutes and swapping players, you’re also dealing with the owner, and the press, and keeping players happy in their roles. There’s a ton of customization available as well. MyGM is an unqualified success.

In addition to the main two modes you can also dive into MyTeam, the digital trading card game in which you assemble a squad to challenge for virtual supremacy. It’s a deep mode with some new tweaks, most notably Dynamic Duos, which applies a boost to certain player combinations. Online has never been 2k’s strongest aspect, but it’s generally solid and has stabilized the further out we get from launch.

NBA 2k17 is yet another excellent installment of what is arguably already the standard bearer for sports gaming franchises. Granted, MyCareer stumbles here and there with its cinematic approach, but the ascension of MyGM more than makes up for it.

By HC Green
Tags: 2k Sports, BASKETBALL, NBA, NBA 2k17
This entry was posted on Tuesday, October 25th, 2016 at 5:30 pm and is filed under BASKETBALL, Herija Green, Video Game Reviews. You can follow any responses to this entry through the RSS 2.0 feed. Both comments and pings are currently closed.