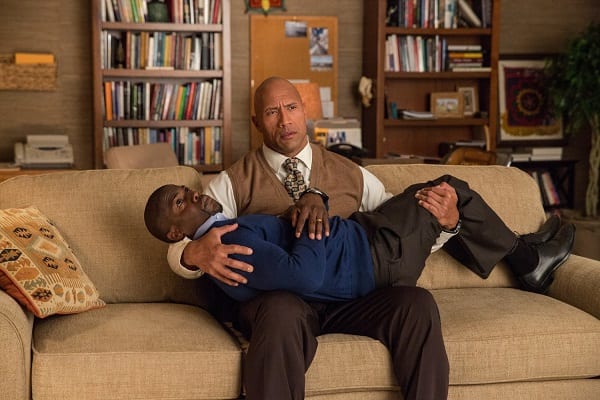 Yep, that about sums it up.

Even though it seems like Dwayne Johnson is everywhere these days, he has never really tapped into the buddy action flick, outside of the underrated The Rundown with Seann William Scott, who was still riding high from his role in the American Pie films. With 2016’s Central Intelligence, however, Johnson is finally leveraging the market by teaming with Kevin Hart for a traditional action-comedy hybrid.

Back in 1996, Calvin “The Golden Jet” Joyner (Hart) was the big man on campus, while overweight Robbie Wierdicht (Johnson) was the object of constant bullying throughout high school, punctuated by being dragged naked in front of the school during a pep rally to celebrate Joyner. Despite his popularity, Calvin wasn’t amused and gives Robbie his letterman jacket to cover up.

Fast-forward 20 years and Calvin, unhappy in his life as an accountant after being voted most likely to succeed, is contacted via Facebook by Bob Stone, who is actually Robbie. With the reunion just around corner Calvin agrees to have drinks with Bob and is stunned to find that the obese teen now looks like a bodybuilder.

After hanging out, Calvin helps Bob with an accounting problem and is shocked to find the CIA knocking at his door in the morning. It turns out Bob is a rogue agent wanted for treason. While Calvin tries to distance himself from the situation, Bob, who considers The Jet an old friend, needs his help. Can they get to the bottom of things? And where do Bob’s loyalties truly lie?

Probably the most important aspect of a successful buddy movie is chemistry, which is something Johnson and Hart display from the onset. There’s a good ebb and flow to their relationship, grounding the film in some semblance of believability even in the face of absurd circumstances. It’s not as consistently funny as it could’ve been (more on that later), but they keep things moving.

Although this is a star vehicle for its two headliners, Central Intelligence has a pretty solid primary plot with a number of twists and turns, escapes and shootouts. It’s heavy on action — no surprise given Johnson’s involvement — and tosses out a number of red herrings as to the identity of the “Black Badger” — the mysterious arms dealer everyone is after.

There’s some depth to the cast as well, including Amy Ryan (best known as Holly, the love interest of Michael Scott, in The Office) as Agent Pamela Harris, and a brief appearance from Aaron Paul as Bob’s former partner, Phil. Melissa McCarthy also show up late in an uncredited role.

As mentioned, Central Intelligence leaves some laughs on the table by not playing to Hart and Johnson’s respective strengths. Hart is frequently acting with a more serious slant than you’d expect, and that doesn’t leave room for his typical high-energy persona. Johnson, meanwhile, too often behaves like a teenager in what we assume is a nod to his rough childhood. Whatever the case, it gets old.

Jason Bateman is overly smarmy as high-school tormenter turned financial bigwig Trevor, delivering his lines with too much venom and hate. Sure, it sets up the big payoff in which Trevor gets his, but it seems like a stretch that someone that looks like Bateman would aggressively confront the adult version of the boy he’d bullied. It flies in the face of the whole “bullies are cowards” narrative.

Most notably, the Blu-ray version of Central Intelligence features both the theatrical and an unrated cut of the film — the latter dials the profanity way up. Interestingly, there are rated and unrated versions of the supplemental materials as well, which includes a lengthy collection of alternate scenes along with a gag reel and other takes of dialogue from the film.

Buoyed by strong chemistry between Dwayne Johnson and Kevin Hart, Central Intelligence is a solid action/comedy, though it could’ve done a better job of accentuating the leads’ strong suits.

By HC Green
Tags: Blu-ray reviews, Central Intelligence, Dwayne Johnson, Kevin Hart, The Rock
This entry was posted on Tuesday, September 27th, 2016 at 9:39 pm and is filed under Herija Green, Movie Reviews. You can follow any responses to this entry through the RSS 2.0 feed. Both comments and pings are currently closed.