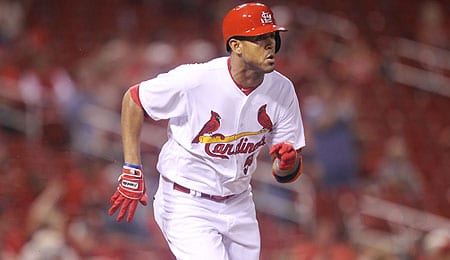 We don’t expect much out of Jose Martinez, but at least he’s getting a chance. (Bill Greenblatt/UPI)

Did you know that when Chicago Cubs starter Kyle Hendricks came within three outs of hurling a no-hitter a week and a half ago in St. Louis (see video below), it almost marked a first in a century. The last time a visiting pitcher tossed a no-no in Arch City? Try April 14, 1917, performed by Eddie Cicotte of the Chicago Black Sox.

We wager that the best sports betting site in Canada would have given you some seriously long odds that the Cardinals could go that long without being no-hit in front of their own fans.

It was a full slate of MLB games on Wednesday, although one tilt was postponed thanks to rain. Baltimore continues to fall out of the race, although the good news is no one is showing up to watch it happen; Daniel Murphy (leg) missed a fourth straight game; and Baby Bomber Gary Sanchez has reached 19 career homers faster than anyone in history.

Let’s get to some Fantasy worthy notes for the night, shall we?

There’s not much to see here from a Fantasy perspective, but it’s a nice story that outfielder Jose Martinez has finally made it to the bigs. He first caught our eye last year with his performance at Triple-A, and he may never get more attention than he will for this moment:

Still, Martinez recorded pinch hit singles in his last two at-bats over the last three games, and after another productive season at Triple-A, he’s batting .375 since his September call up. It’s always a nice story when a minor league veteran gets his shot and makes good — even when it’s on such a small scale that it doesn’t cause a Fantasy ripple.

It’s become fairly clear that Houston catcher Jason Castro’s 2013 season was the outlier, and the 10th overall pick from the 2008 draft is simply not that good a hitter. Still, his glovework is strong, and he wound up throwing out a runner to end the game Wednesday. But what do we Fantasy owners care about that? Castro has always flashed decent power and he’s matched last year’s homer output, giving him four straight double-digit dingers seasons. That’s something. And while he drew two walks Wednesday, he was 0-for-2, leaving him 2-for-21 over the last 10 games as his awful September keeps getting worse. Yet this isn’t even Castro’s worst month of the season as his overall hitting has regressed three years running. The good news? He’s enjoying the finest walk rate of his career, somewhat salvaging what’s otherwise been another crappy campaign as Castro’s Fantasy use is now limited to deep NL-only leagues. Still using Castro? You’re better off with Francisco Cervelli or even Tyler Flowers.

Robinson Cano’s walk-off sacrifice fly (how exciting!) on Wednesday gives him three ribbies in the last two games as he’s reached 90 for the first time as a Mariner and sixth time in his career. It’s been a great bounce back campaign for him, but he’s really scuffled over the last two weeks or so. Cano is batting just .130 over the last week and .224 in September. Still, it’s hard not to like what he’s done this year after two somewhat down seasons since coming to Em City. Cano’s counting cats are way up this year and more of his doubles have become home runs. Unfortunately, his speed — such that it was — has completely evaporated. Since reaching double digit swipes in his first year as a Mariner, Cano has just two steals in the two years since. Ugh. But this was never a big part of his game and the fact that his bat clearly isn’t slowing down even though it seemed like it was heading that direction last year is a real bonus for his keeper league owners. Cano will be 34 next month, and second basemen often fall off the table at this age, so it might not be a bad idea to float his name in trade talks this offseason and try to cash in on his revitalized effort.

Now it’s your turn. Let us know in the comments below what you expect out of Jose Martinez going forward.

By RotoRob
Tags: Jose Martinez, MLB
This entry was posted on Thursday, September 22nd, 2016 at 1:28 pm and is filed under BASEBALL, MLB Today, RotoRob. You can follow any responses to this entry through the RSS 2.0 feed. You can skip to the end and leave a response. Pinging is currently not allowed.