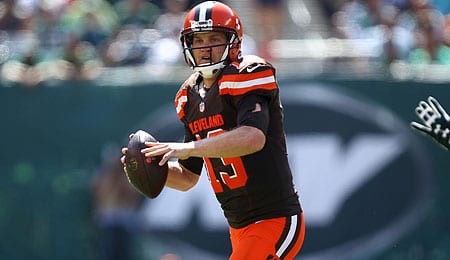 Josh McCown had the Browns rolling… then he got hurt. (Danny Wild-USA Today Sports)

If you’re old enough to remember that the Cleveland Browns were once a serious powerhouse, chances are your VCR (yes, you still have one) is flashing 12:00.

It was a dynasty, pure and simple.

Cleveland won another title in 1964 and consistently made the playoffs throughout the ’60s, ’70s and ’80s.

But the Browns only made the playoffs once in the 1990s and just once in the following decade (in 2002), leaving them with a streak of 13 straight seasons without a postseason appearance. Their last winning season? Try 2007.

And with the Browns off to an 0-2 start this year, the chance of either of those streak endings this season is already looking remote.

On Sunday, Cleveland stormed out to a 20-0 lead over Baltimore less than 10 minutes into the game, only to see the Ravens score 25 unanswered points for a 25-20 win.

The Browns have blown a lot of games over the years, but this one stings. Let’s have a look at some of the more Fantasy relevant stories worth tracking in Cleveland.

Quarterback Josh McCown came flying out of the gates Sunday, but then hurt his shoulder and struggled for the rest of the game. He won’t play in Week Three and is listed as week-to-week. Wondering why McCown didn’t come out given that the injury was clearly hampering his performance? Watch the video below to find out. It’s still unclear how seriously McCown is hurt, but we do know that rookie Cody Kessler will make his first NFL start on Sunday. We’re not expecting much from the kid. In fact, you may want to ensure your stomach is empty of contents before watching this game.

Of course, with Robert Griffin III already out for the season after breaking his shoulder in the opener, Cleveland is faced with yet another crisis at quarterback. Apparently, the team is even considering signing Michael Vick at this stage.

It’s hard not to get excited about rookie wide receiver Corey Coleman. He only caught two passes on five targets in Week One, but showed big play ability. In Week Two, he hauled in five catches out of eight targets, racking up 104 yards and two touchdowns. A first round pick out of Baylor, Coleman looks like a budding star already. Bear in mind that with Kessler under centre, the going could be rough in Week Three, but on the plus side, the Browns are facing a Dolphin secondary that has struggled so far. If Coleman is somehow still available in your league, grab him now. He’s the real deal.

Place kicker Patrick Murray wasn’t much of a Fantasy option heading into the season, but after his forgettable showing in Week Two, he looks even worse. He missed his only field goal attempt (it was tipped) and had one of his three extra point tries blocked. Really, you can’t fault him for special team screw ups, but Murray could be the worst kicking option in the NFL, so surely you can find something more palatable for your Fantasy team.

Receiver Terrelle Pryor wasn’t as good in Week Two, managing just three catches out of 10 targets for a measly 32 yards — less than half of what he put up in Week One. It didn’t help that he nullified his own 20-yard reception with a questionable taunting call. Keep an eye on Pryor for now, but leave him on the wire until he shows more.

Running back Isaiah Crowell built on a nice opening game with a huge performance in Week Two, establishing himself a nice RB2 option. His day was made complete thanks to an 85-yard touchdown run — the second-longest rushing play in team history. Crowell has now scored in each of the first two games and despite logging just 30 carries, has really made it count with 195 yards rushing (6.5 YPC). He’s well on his way to a major breakout campaign, and his development is key to this Browns team improving as the season wears on.

Tight end Gary Barnidge is looking like a bust. At least he finally drew some targets in Week Two, but those expecting this 2015 breakout star to match what he did last year must be extremely disappointing. It wouldn’t be surprising to see Barnidge start winding up on the wire if he doesn’t start producing more next game. And, again, with Kessler getting the start, we don’t see it happening.

Now it’s your turn. Let us know in the comments below what you think the Browns have to do to get back to winning football.

By RotoRob
Tags: Cleveland Browns, Josh McCown
This entry was posted on Wednesday, September 21st, 2016 at 11:10 am and is filed under FOOTBALL, RotoRob, Team report. You can follow any responses to this entry through the RSS 2.0 feed. Both comments and pings are currently closed.