MLB Today: Alex Cobb Wins For the First Time Since 2014 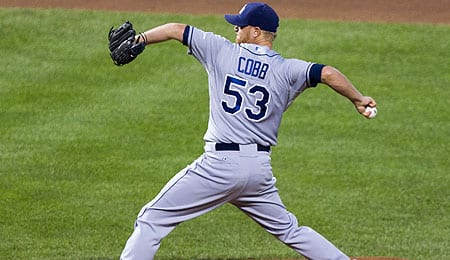 Curt Schilling sure does love to say it like it is, doesn’t he? His latest rant, earlier this week on the 94WIP Afternoon Show was directed at Tim Tebow, the former football “star” who is now trying his hand at baseball.

“The quote that I think probably got Larry Bowa]’s blood boiling and the one the kinda got my hair on end is the quote of, ‘He was a really good hitter in high school.’ Well, you know what? So was I,” Schilling said.

Is the signing of Tebow by the Mets merely a publicity stunt designed to sell tickets? Time will tell.

Now let’s discuss the action in an exciting night of baseball on Wednesday that included Mark Trumbo reaching 100 RBI, the Tigers and Orioles really making the AL Wild Card race interesting and Tanner Roark continuing his impressive — and underrated — season.

Looking for some late-season pitching help? Take a look at Tampa Bay’s Alex Cobb, who won Wednesday for the first time since 2014 by holding the Jays to two hits and one run over 6 2/3 innings. Since returning from Tommy John surgery, he’s done quite well, giving up just 15 hits over 17 2/3 IP while going undefeated over three starts. The fact that Cobb beat a team that is desperately gunning for a division title is all the more impressive. We’d say he passed a big test there, and now deserves a spot on your roster. Hell, Cobb’s even a nice guy, apparently (see video below).

Just over seven weeks ago, Chicago Cubs starter Jon Lester got smacked around by the Brewers. Since then, he’s been virtually unstoppable and this amazing run has catapulted him into the NL Cy Young discussion. Max Scherzer is our pick right now, but if Lester keeps rocking, look out. After limiting the Cards to three hits over eight shutout frames while fanning eight and walking one, Lester now has a nine-start run during which he’s pitched 61 2/3 IP, giving up 39 hits, seven earned runs, three homers and 12 walks while fanning 61. His ERA over this stretch? Oh, it’s 1.02. His runs allowed by start over this run: 0, 2, 2, 1, 1, 0, 1, 0, 0. Lester is now tied for the NL lead in wins, while leading the way in winning percentage. He’s second in ERA, third in WHIP and fourth in complete games. Like we said, there’s a case here for some hardware. The problem Lester had with homers earlier in the season is clearly a thing of the past and that’s made all the difference as he’s on track for the best ERA of his career.

What’s helping Lester is that one of the top candidates for the NL Cy Young award has suddenly hit a snag. San Francisco’s Madison Bumgarner has looked a lot more human over the last five or six weeks. In fact, since shutting down the Orioles just over a month ago, he’s had a string of tougher outings. We wouldn’t characterize them as bitch-slappings (although a couple came close), but they have not been up to MadBum’s standards — especially given what he did in the first half. Take Wednesday, for instance. He surrendered three earned runs and seven hits over 6 2/3 IP — a quality start by anyone’s definition, but not up to snuff for Bumgarner. He remains one of the most durable arms in the game, having already topped 200 IP for the sixth straight season and on pace for a new career high in this department. Bumgarner has been tougher to hit this season, but an increased walk rate has seen his WHIP rise a tad. It’s possible his heavy workload is catching up to him, but the Giants are fighting for their playoff lives, so don’t exactly have the luxury of allowing him to skip a start or come out early. It’s a concern, so we’ll be interested to see how it plays out in Bumgarner’s results for the rest of the season.

Now it’s your turn. Let us know in the comments below who you think will win the NL Cy Young.

By RotoRob
Tags: MLB
This entry was posted on Thursday, September 15th, 2016 at 11:40 am and is filed under BASEBALL, MLB Today, RotoRob. You can follow any responses to this entry through the RSS 2.0 feed. Both comments and pings are currently closed.