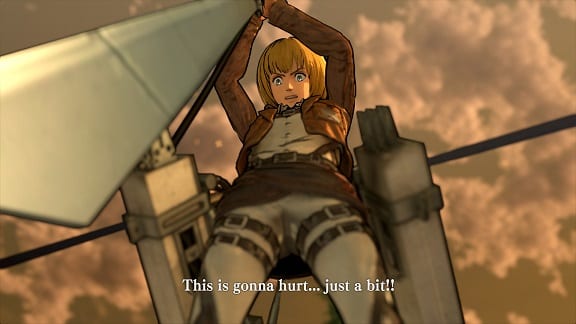 Attack on Titan is an enormously popular anime series that has inspired one of the latest Omega Force games from Koei-Tecmo. It’s a tall order to transform the series’ signature high-flying acrobatics into compelling gameplay, but somehow it managed it.

With the anime series features characters that could be described as Spider-Man meets a ninja, maintaining that feeling is pretty crucial. Traversal feels similar to various Spider-Man games over the years, with locomotion controlled largely by just holding forward and a face button. When it comes to actually attacking the Titans, you’ll have to engage a dedicated lock on button and attach yourself to a part of it.

Attacking is controlled by using the analog sticks, which will force you forward to the body part, with strikes being just a single button reliant on timing rather than combos. While it works well, there are some issues, such as certain Titans hanging out near areas that make targeting them incredibly annoying or when many are in a tiny area it can be a chore to lock on to the specific target you want.

Attack on Titan is a largely faithful adaptation of the anime, which received a lot of attention for how good it looked. Character models are great, especially in story sequences, though during actual gameplay the visuals don’t hold up as well.

It shows that the game was designed for a wide array of platforms. Most areas are ugly and full of pretty basic textures, and you’ll be moving so fast it’s hard to not find moments of glaring pop-in. Problems are exacerbated by an over-the-top UI and many effects that obscure your vision, especially right after killing a Titan.

Sound is largely excellent, though some purists may revolt when they realize none of the TV show’s music is intact. It’s nearly all original tunes, though on the plus side they’re actually pretty good, especially the themes for the boss introduced in the third chapter.

Voice acting is only available in Japanese, which makes following some of the mid-level story and subtitled banter hard at times given how much is going on.

Titans have only one weak point, the nape of their neck, which has resulted in humanity inventing a harness that allows people to fling themselves about in the air via wires. Players will be hopping into the shoes of a variety of people trained in the use of this gear, from the lowly new recruits to the star pupils of the Scout Regiment.

The game tells the story of Season One of the anime, which largely follows the exploits of Eren Jaeger and his friends as they work to reclaim the world from the Titans. This makes up the bulk of Attack Mode, the game’s storyline campaign, however there’s also an optional Expedition mode that allows players to jump right into the action as well as play online with their friends.

While each mission has a variety of objectives, they basically boil down to killing Titans, usually 20 or 30 per stage. Each stage has side missions in which you can gain additional supplies or help from another character, but really it’s all about killing Titans as fast as possible. Attack on Titan has an incredible sense of speed, and it feels amazing those times when you nail a stylish boost past a Titan’s face, turn around, lock on to his neck and take him out in one fell swoop.

That being said, the game does suffer from being fairly repetitive. You’ll have the strategy for most encounters down quickly, and you’ll spend a large chunk of time taking out the same enemy types that only vary in that some will have crafting materials associated with body parts you may want to remove first.

A few unique types do appear toward the end of the campaign, but there are just not enough of them. It’s a game we’d recommend playing in short bursts, one or two missions at a time, rather than powering through all at once.

Toward the end a pretty big grind appears. For instance, there’s a story-based epilogue that requires completing a bunch of the expedition missions to even try the next story one. There’s also a gear system in place that eventually gets tedious as you try to sort out where to get all the parts you need for crafting.

Technical issues undermine it as well. Enemies frequently appear near walls or buildings that they clip through to make some battles feel pretty weak. There are escort missions with surprisingly bad AI that we’d find running in circles at times. Considering they cause players to slow down as well, their inclusion feels even worse than most tedious escort quests.

Attack on Titan is a slick and stylish action game. While it has some technical issues and does have a tendency to become quite repetitive, it’s worth exploring just for the sense of exhilaration that comes from the movement mechanics.

By Brian Gunn
Tags: Anime, Attack on Titan, Omega Force, Video Game Review
This entry was posted on Tuesday, September 13th, 2016 at 1:07 pm and is filed under Brian Gunn, Video Game Reviews. You can follow any responses to this entry through the RSS 2.0 feed. Both comments and pings are currently closed.