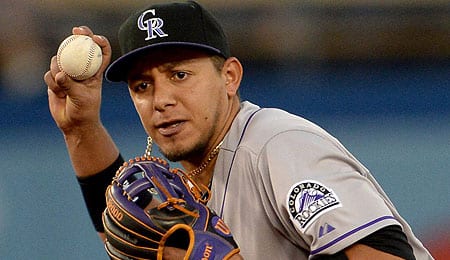 Welcome back to another week of Fantasy baseball waiver wire recommendations. It’s mid-September now, so we’re squarely into the final run of the 2016 season. Go bag that title!

This week, the Mets have signed former football attention whore Tim Tebow; Andrew Cashner said he’d consider re-signing with the Marlins if they get rid of their no facial hair rule; and Stephen Strasburg dodged a bullet as he doesn’t need Tommy John surgery, but there’s no idea how long he’ll be out.

Cristhian Adames, SS, Colorado Rockies (ESPN: 0.1 per cent; CBS: 1 per cent): Adames is unlikely to ever be a Fantasy star, but with just Daniel Descalso in his way, he has a great shot at regular playing time as a middle infielder playing half his games at Coors Field. Adames is hitting better lately and even picking up his productivity. He saw his most PT yet in August and hit better, earning himself extra at-bats down the stretch. And so far this month, Adames is making the most of them with a 1092 OPS, while showing a flair for the dramatic (see video below). Give him some consideration in deeper NL-only leagues.

Ryan Schimpf, 2B, San Diego Padres (ESPN: 10.2 per cent; CBS: 22 per cent): Yes, he strikes out a lot and doesn’t exactly hit for a good BA, but middle infielders that flirt with 20 homers in less than half a season don’t exactly grow on trees. Schimpf is an extreme flyball hitter. In fact, no one in baseball with at least 250 plate appearances is close to what he’s doing in that regard. But you add in his runs and his overall extra-base pop, and we can’t understand why this dude isn’t getting more Fantasy love.

Clayton Richard, RP, San Diego Padres (ESPN: 4.9 per cent; CBS: 4 per cent): Richard has shown flashes from time to time of being a very good control pitcher, and while this season isn’t one of those times, he’s suddenly enjoying some real success since landing in San Diego and being moved into the rotation. In five starts since the shift, he has yet to give up more than two earned runs and on Thursday he enjoyed his finest outing yet, hurling seven goose eggs at the Rockies, giving up just six hits and two walks while whiffing eight. Richard was seeing a fair amount of use as the Cubs’ LOOGY, but was getting shelled, and now he’s a starter for the Padres, giving up less than a hit per inning. Yup. It’s a strange game.

Steve Pearce, 1B, Baltimore Orioles (ESPN: 14.5 per cent; CBS: 23 per cent): Two years ago, Pearce enjoyed a big breakthrough season with the Orioles, but really collapsed last year. This season, he bounced back for the Rays and now he’s back in B-More, and while he’s failed to rediscover his Oriole magic, he’s getting more of a chance to play. With Chris Davis dealing with a hand injury that could cause him to miss games here and there, Pearce stands to benefit. Pearce can still be a productive hitter when he gets his at-bats, so give him a look.

Jose Peraza, SS, Cincinnati Reds (ESPN: 25.3 per cent: CBS: 26 per cent): Peraza has proven he’s capable of piling up the runs in Triple-A, and while they’re not coming lately in the bigs, you can’t argue with his tremendous BA and speed. The rookie hit .463 in August and is at .393 so far in September. Um, pick him up and enjoy the ride. We love Peraza’s upside.

Cameron Rupp, C, Philadelphia Phillies (ESPN: 10.1 per cent; CBS: 34 per cent): Two years ago, Rupp was one of the Phillies’ better prospects and was on the rise as he flashed great power at Triple-A, homering in each of the first four games of the season. Unfortunately, he managed just two more dingers over his final 55 games. Last year, Rupp became the Phillies’ backup and, this year — with Carlos Ruiz traded away — he’s now the starter, and that power he hinted at has developed. Rupp strikes out more than you’d like, and he’s scuffling a bit lately, but on Friday he mashed his 15th homer of the season. Throw in 20 doubles and you’ve got a nice power threat at catcher. That has serious value.

Jake Thompson, SP, Philadelphia Phillies (ESPN: 3.3 per cent; CBS: 11 per cent): Part of the massive haul the Phillies received in the Cole Hamels trade, Thompson has looked much better in his last three starts. Don’t let the overall ugly ERA and record fool you; Thompson is starting to figure it out.

Chad Bettis, SP, Colorado Rockies (ESPN: 17 per cent; CBS: 31 per cent): Bettis has had more issues with homers allowed this year, but he’s looked fantastic in his last two starts.

Kyle Barraclough, RP, Miami Marlins (ESPN: 8.7 per cent; CBS: 10 per cent): With Fernando Rodney looking awful and A.J. Ramos still hurting in Miami, Manager Don Mattingly has hinted that Barraclough could get a crack at saves.

Kevin Siegrist, RP, St. Louis Cardinals (ESPN: 4.1 per cent; CBS: 9 per cent): Siegrist’s strikeout rate dipped a bit in June and July, but has bounced back since August. He remains one of the top middle relievers to own.

By RotoRob
Tags: Cristhian Adames
This entry was posted on Sunday, September 11th, 2016 at 3:13 pm and is filed under BASEBALL, RotoRob, The Wire Troll. You can follow any responses to this entry through the RSS 2.0 feed. Both comments and pings are currently closed.