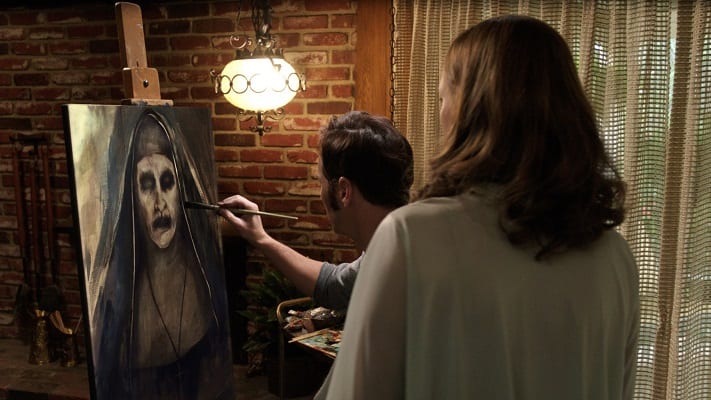 Yeah, that’s not going in the living room.

As a sequel to the 2013 film based on the famed Amityville haunting case, The Conjuring 2 once again follows the real-life exploits of Ed and Lorraine Warren, albeit in sensationalized fashion. This time, the film is based on the Enfield Poltergeist case in which a family in London was purportedly terrorized by evil spirits.

Whether or not the story is true makes little difference in a horror movie such as this, as it’s all about the scares…

Set one year after the events of the original, Ed (Patrick Wilson) and Lorraine (Vera Farmiga) have attained a level of fame (or infamy) based on their connection to the Amityville case, and Lorraine feels the time has come to stop getting directly involved and stick to public speaking. This is due in large part to visions of her husband’s death, and Ed reluctantly agrees to semi-retire.

Meanwhile, in London, the Hodgson family inhabits an old, rundown house when strange things start to occur. Initially it’s the younger daughter Janet that experiences these phenomenons, but it soon spreads to her sister, two brothers and mother. When it becomes clear that Janet is the primary target and even leaving the house doesn’t solve the problem, the family reaches out to the church.

In turn, the church seeks out the Warrens, who, despite Lorraine’s misgivings, agree to travel to London to ascertain whether these happenings are real or an elaborate hoax perpetrated by the family. They’re joined by paranormal specialist Maurice Grosse (Simon McBurney) and psychologist Anita Gregory (Franka Potente), who will try to help the Warrens unravel the truth.

There are essentially two kinds of horror films: those that rely on jump scares and those that create and maintain an air of foreboding. The Conjuring 2 falls into the latter category. Much of the terror is left unseen or briefly glimpsed with few extended looks at the spirit tormenting the family. At no point do you feel that anyone is truly equipped to handle it, and therefore you’re always concerned for them.

In terms of creating disturbing imagery, director James Wan seems to be channeling his inner Guillermo Del Toro, getting plenty of scares out of the combination of the Nun and the Crooked Man. Both are interesting and legitimately creepy, particularly the lanky Crooked Man, and both are used sparingly to keep the fear factor up. Bill Wilkins has his moments as well, though he takes a backseat here.

Wilson and Farmiga have legitimate chemistry in their role as husband and wife, and the Hodgson family does a good job as well, particularly Janet. They do engage in the tired horror trope of strolling into frightening situations that you’d think real people would avoid — particularly once all the crazy stuff has started to happen — but it isn’t too frustrating.

Although we liked Wilson in his role as the faith-driven everyman, he has appeared in so many of these types of films it’s actually a bit distracting. In fact, we found ourselves confused by mixing what had happened in the first Conjuring with the events of the two Insidious films.

For a horror flick, The Conjuring 2 is really long at nearly two hours, and almost all of the first hour is spent without the Warrens. They appear in a prologue and a couple of scenes, but the Hodgsons are just generally visited by one terrifying event after another until the Warrens finally arrive. It creates some odd pacing and feels like it could’ve been more tightly presented.

Easily the most interesting bonus is a few minutes of deleted scenes, which show a story arc in which Janet is being bullied at school (in absurdly choreographed fashion) and her siblings seem to be souring on her. It was a wise omission because it would’ve made absolutely no sense given they all experienced the terror and know she isn’t embellishing. The rest are standard “this is how we did that” featurettes and a little context for the “real” events that the film is based on.

There’s little question The Conjuring 2 isn’t as well conceived as the original, but that doesn’t mean it isn’t a creepy romp.

By HC Green
Tags: Blu-ray reviews, James Wan, Patrick Wilson, The Conjuring 2
This entry was posted on Monday, September 12th, 2016 at 12:10 am and is filed under Herija Green, Movie Reviews. You can follow any responses to this entry through the RSS 2.0 feed. Both comments and pings are currently closed.