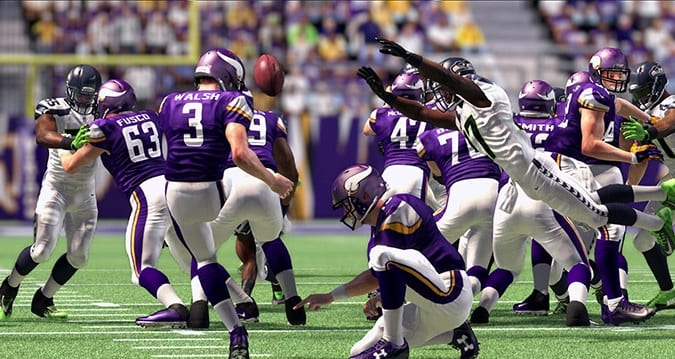 A year after overhauling the aerial attack, EA Sports has targeted the ground game for the big improvements in Madden NFL 17. It’s a continuation of EA’s long-term strategy of cycling through football’s primary areas — passing, running and defense — and prioritizing them. It may irk those that pine for a more substantive overhaul, but Madden continues to make tangible progress toward a more authentic representation of the sport.

Structurally, not a lot has changed from last year, though the increased number of passing options and ability to immediately transition to receiver control for specific catch types still feels fresh. The changes to the running game are noticeable but not game altering. Madden simply factors running style and size into the equation to a higher degree, so power backs excel at trucking and stiff arms while shifty runners do better with spins and jukes.

In fact, despite the publicized focus on the run, special teams is the part that feels different. Kicking now employs a sometimes tricky three-press setup for field goals and PATs, kickoffs can be squibbed or skied and punts bounce more realistically after hitting the turf. More significantly, you can actually block kicks this year thanks to a new rush mechanic that rewards timing the snap and slipping blocks.

Added accessibility is the other notable difference for this year with lower difficulties displaying the ideal path for you to follow with your controlled player. You’re obviously not obligated to do so, but the game is demonstrating how to accurately execute a play. Madden will also execute special moves (i.e., spins, stiff arms, hurdles, etc.) automatically on those settings.

Given the presence of a loyal core following, it makes sense for EA Sports to continue looking for ways to bring new, less experienced/skilled players on board, but it’s still of no interest to series vets.

Visually, there isn’t much to differentiate this year’s Madden from 2016, though the team continues to make strides in fluidity and realism of movement. Ball physics are also noticeably better, which should lead to some crazy “did you see that?” deflections that deserve a second look for how authentic they were rather than how absurd. The addition of a crawl with scores from other games is a nice touch.

Ladies and gentlemen, Phil Simms and Jim Nantz have left the building. In their place are Brandon Gaudin and Charles Davis. The move is a huge step in the right direction as the pair adds a chemistry and freshness that has been lacking for years. It’s not perfect, but the promise of newly recorded commentary released throughout the season is a great idea.

Although running and special teams serve as the signature additions, other changes have been made as well. Line play has been tweaked for improved realism in creating blocking lanes and pockets, whereas the defense displays better gap awareness and integrity.

More important, though, are the improvements in coverage. One of our complaints last year was that the new “aggressive catch” option tilted things too far in the receivers’ favour, but in Madden 17 defensive backs can try to swat the ball away rather than always playing for the interception. That, along with better zone coverage, makes defending the pass more enjoyable.

To that end, “Play the Moments” has been added, which allows you to simulate games and then jump in for direct control during important situations. For instance, any time you or your opponent reaches the red zone you’ll have the opportunity to try to finish with six or stand tall defensively. There are several other scenarios as well, and you’ll be given the option to accept or decline each time.

While it works in its designed purpose, to make games faster, it does feel oddly disjointed, particularly when you step in, convert a third down and head back to simulating. Still, for those that like to rack up games and seasons, this is a nice option.

Another franchise improvement is “Big Decisions,” in which the game offers you a fork in the road and lets you take whichever path you’d like. This manifests in the form of injuries — rush them back and risk them aggravating it or let them heal fully — and contract negotiations. The latter is interesting, though the process itself shades a bit random and could use more defined depth. Also of note, 10-player practice squads have been added as well.

Madden Ultimate Team (MUT) has made some tweaks to simplify the process of assembling a team along with giving those that prefer to play against the CPU more incentive with individual challenges. Team chemistry is a thing now, too, offering to unlock performance bonuses by putting together multiple players with the same chemistry.

Madden NFL 17 isn’t dramatically different from last year, but it feels like it has successfully added and polished several areas without losing ground in others. If you’ve elected to sit on the sidelines in recent years, this is a great re-entry point.

By HC Green
Tags: FOOTBALL, Madden, Madden NFL 17, NFL, Video Game Reviews
This entry was posted on Thursday, September 8th, 2016 at 1:46 pm and is filed under FOOTBALL, Herija Green, Video Game Reviews. You can follow any responses to this entry through the RSS 2.0 feed. Both comments and pings are currently closed.