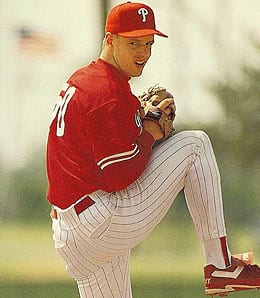 It was 24 years ago today that Phillies farmhand Andy Carter tossed a no-hitter at Double-A, as did his opposing pitcher that day — Boston’s Scott Bakkum. A Philadelphia native, Carter spent two seasons with the Phillies (1995-96) and in his MLB debut, he plunked two of the three hitters he faced to earn an ejection. Talk about announcing his presence with authority.

See more about this game at Call to the Pen.

Around the horn in the majors on Monday, the following items caught our eye…

We slotted Adrian Gonzalez 14th in our rest of season First Base Rankings, released early last month. Given his play since then, we may have been short-changing him. AGon went yard three times for eight RBI on Monday (a hell of a game in any language — see video below), and after batting .315 in July, he’s now smacked six homers already to go along with an OPS of 1134 in August. He’s hit safely in 15 straight and remains among the most durable players in the game, on pace to top 155 games for the 11th straight season.

Just over a month ago, we suggested you pick up Baltimore’s Dylan Bundy. Well, if you didn’t listen then, it’s most likely too late now. Yes, Bundy took a beat down last week against Boston, and he’s had a couple of hiccups here and there, but generally has been a very steady and strong starter. After his quality start to earn the win over Washington on Monday, he’s now given up three earned runs or less in six of his eight starts, five times yielding two or less and three times surrendering just one or none. It’s been a long time coming, but Bundy looks poised to finally deliver on the promise we’ve known he’s had for years.

Houston SP Doug Fister has been roughed around of late, but on Monday, he looked like his old self, hurling seven shutout frames with just three hits allowed against the Pirates. He’s been extremely inconsistent lately, but overall, August has been kind to him, so if you need a starter down the stretch, there’s a decent chance he’s available in your league. Hey, if nothing else, it’s good to see that Fister has stayed healthy — and maintained his rotation spot — this season. His improved hit rates is another pleasant turn of events.

Don’t look now, but David Price has actually put three solid starts together. After his eight shutout innings against his original team on Monday, he has now won three straight starts, giving up 16 hits and four earned runs over 22 IP, fanning 20 and walking just three. It’s the first time Price’s ERA is down to 4.00 since his season debut, and after a superb July (2.80), he’s carried his success into August (2.91). So this is why Boston signed him.

Now it’s your turn. Let us know in the comments below what memories — if any — you have of Andy Carter.

By RotoRob
Tags: Adrian Gonzalez, Andy Carter, Boston Red Sox, MLB, Philadelphia Phillies
This entry was posted on Tuesday, August 23rd, 2016 at 6:59 pm and is filed under BASEBALL, MLB Today, RotoRob. You can follow any responses to this entry through the RSS 2.0 feed. Both comments and pings are currently closed.