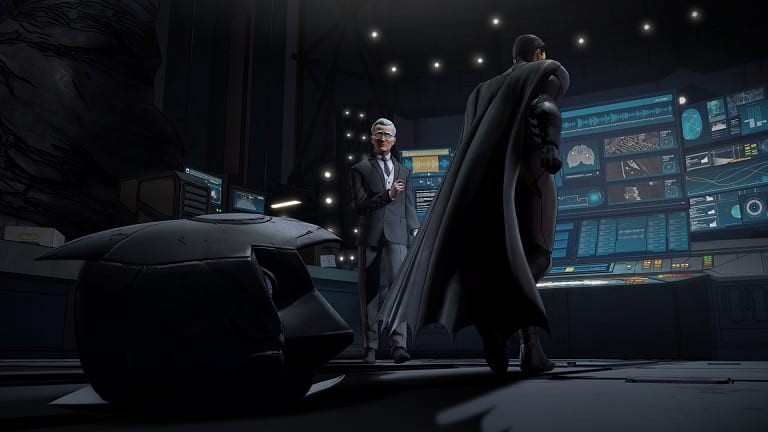 Telltale lets you hang out in the Batcave as both Bruce and Batman.

Telltale Games has mastered the art of storytelling in existing licenses, though many of its stories so far have existed canonically in established universes. With Realm of Shadows, the first episode of Batman: The Telltale Series, it uses established mythology but plays fast and loose with elements to create its own path. The result is a different type of Batman game, one that focuses as much on being Bruce Wayne as it does the Dark Knight.

Between Batman and Telltale’s last major release (the Michonne miniseries), it’s clear that its engine has been upgraded. Movement is crisper and quick-time events are more varied, using button combinations or reticule placement.

In the end, though, it’s still a Telltale control scheme, so character movement — when you are actually doing it — is somewhat clunky, despite the better response time and frame rate.

Telltale’s distinct art style works best in a comic book environment. It fit perfectly for The Walking Dead and The Wolf Among Us, both based on comic books, and that’s the case here as well.

For Batman, the characters are so ubiquitous that the only visual disparity seems to come from the direction chosen for characters — Harvey Dent is built like a pro wrestler and towers over Bruce Wayne while Oswald Cobblepot more resembles the version from the Gotham TV show rather than the traditional Penguin look. And for what it’s worth, Bruce is drawn like Archer.

Once again, Telltale has brought out a stellar voice cast, and if you know your voice actors, you’ll recognize plenty of voices here. Troy Baker, who ironically played the Joker in Batman: Arkham Origins, gets the lead as Bruce/Batman, while other voice-actor all-stars play key parts, including Laura Bailey and Richard McGonagle.

All fit their roles, and Baker seems to be playing Bruce as halfway between his troubled Booker Dewitt from BioShock Infinite and Kevin Conroy’s signature Batman voice across various incarnations.

Telltale games are always about story, and what sets Batman apart from, say, the Arkham series, is that most of the game (or at least the first episode) feels more like a Bruce Wayne simulator rather than Batman taking on crime.

There are certainly elements of combat via quick-time events, but then there are also long stretches of Bruce interacting with Gotham’s notable population by day as he tries to get to the bottom of a seemingly corrupt mayoral race.

There is one sequence in which you put Batman’s lauded detective skills to work by connecting clues, and another in which you plan your assault to take out thugs. It’s certainly different and a way of getting Telltale’s control scheme into the mind of Batman, but those segments also feel like a somewhat simplified clone of what was previously presented in the Arkham series.

Does it work? It really depends on what you’re looking for out of your Batman experience. In many cases, Bruce’s origin story has been told and retold so many times that to touch on his parents’ death once again feels unnecessary. At the same time, we’ve never had an interactive experience that puts you in Wayne’s mind to see what makes him tick.

So, if you’re looking for a more story-based version of the Arkham games, you’re out of luck. If you’re looking for essentially an interactive take on the popular animated incarnations of Batman, Telltale has taken the right step in bringing that to life in its signature style — dialogue decisions and exploration with the occasional quick-time sequences.

It should be noted that this isn’t based on any particular iteration of Batman, so if you’re looking for set facets of the Batman lore, you’ll find that they’re in the game but remixed a bit. Thus, this is a standalone Batman tale and not tied to any specific comic, TV show, game or film.

Telltale series have become almost a genre unto themselves, and while the first Batman episode is solid throughout, Realm of Shadows doesn’t necessarily break new ground other than a few control elements. What it does do, though, is offer an experience that is equal parts Bruce Wayne and Batman. For many Bat-fans, that may be all you need to say.

By Mike Chen
Tags: Batman, Batman: The Telltale Series, Episode 1, Realm of Shadows, Telltale, Video Game Review
This entry was posted on Thursday, August 4th, 2016 at 2:19 am and is filed under Mike Chen, Video Game Reviews. You can follow any responses to this entry through the RSS 2.0 feed. Both comments and pings are currently closed.