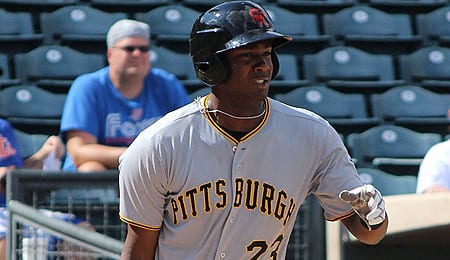 Josh Bell is ready for a crack at the Show. (Pittsburghsportingnews.com)

Welcome back, Fantasy baseball addicts, to another edition of The Wire Troll. JB is back in business (now a proud owner of a Pathfinder badge), and is ready to help guide your Fantasy teams to the promised land. Shout-out to RotoRob on his fantastic coverage over the last three weeks, as he made some great recommendations that are already returning profits.

This week saw the Atlanta Braves sweep the New York Mets, another Trevor Rosenthal ninth inning nuclear meltdown, highly touted prospect A.J. Reed called up to The Show, and James Shields make it out of the second inning against the best offense in the league. It was a rowdy one indeed.

Now, let’s talk about some studs sitting on your waiver wires who will provide a substantial boost to your lineups, both now and during the second half of the 2016 season.

Josh Bell, 1B, Pittsburgh Pirates (ESPN: 1.8 per cent; CBS: 17 per cent): After a gruelling, five-year journey through all levels, Josh Bell seems to have finally outgrown the minor leagues. This season with Pittsburgh’s Triple-A affiliate in Indianapolis, the 23-year-old is hitting .321 with 41 runs, 47 RBI, and 11 homers (see the video below for a glimpse of his power). The current road block preventing Bell from being in The Show right now is the crowded bench for the Pirates.

They possess Matt Joyce, Sean Rodriguez and David Freese, all with very particular roles. Despite the clogged pipeline, now is the time to stash the switch-hitting Bell because he is just one Pirate injury away from Fantasy Baseball relevance.

Steven Moya, OF, Detroit Tigers (ESPN: 13.1 per cent; CBS: 27 per cent): Once J.D. Martinez landed on the disabled list with a fractured elbow, Moya was called up to hold down the fort. But if Moya keeps up his current torrid pace, he could finally be up for good. Since his call up, the 6’7”, 260-pound mammoth is hitting .370/.433/.778 with three homers through seven games. Moya’s current BABIP is extremely high, but even in Triple-A he was sporting a .298 BA, a product of much better plate discipline compared to previous campaigns.

Even if his playing time gets cut dramatically once Martinez returns in 4-to-6 weeks, the power potential from Moya is more than worth your attention.

Brandon Nimmo, OF, New York Mets (ESPN: 0.6 per cent; CBS: 9 per cent): Michael Conforto was optioned to Triple-A Las Vegas on Saturday and in a corresponding move, the Mets’ No. 1 pick in the 2011 draft was called up to the bigs. Nimmo was rewarded after hitting .331 with five homers and five steals this year with Las Vegas. He has shown impressive contact skills and plate discipline ever since moving up to High-A in 2014, and should receive a decent amount of playing time with the Mets, especially against RHP.

The lefty has never hit more than 10 dingers in a season, so his upside is currently limited in Fantasy leagues, but he makes for a nice pickup in NL-only and deeper mixed leagues.

Cody Reed, SP, Cincinnati Reds (ESPN: 17.1 per cent; CBS: 39 per cent): Through his first two MLB starts, Reed has been quite impressive although the box scores show mixed results. Both starts have come against offenses that have been on recent tears, San Diego and Houston, yet he still has managed to retire 15 batters via strikeout in just 12 innings. Unfortunately for southpaw, the Reds’ next three series come versus the Cubs, Nationals and then the Cubs again leading into the All-Star break.

Despite this bumpy stretch of road ahead, Reed deserves your attention in Fantasy leagues after posting a 3.20 ERA and 8.77 K/9 through 11 starts at Triple-A this year, and displaying serious strikeout potential during his limited time with the Reds. The Fantasy baseball season is a marathon, not a sprint. Pick him up now before he’s gone, but have a little patience, Young Grasshopper.

Seung Hwan Oh, RP, St. Louis Cardinals (ESPN: 16.4 per cent; CBS: 30 per cent): Over Rosenthal’s last five appearances, he has only made it through 2 1/3 IP, while giving up seven earned runs on a laughable 10 hits. After his latest meltdown Friday against the Mariners, Cardinals manager Mike Matheny finally expressed concerned over the situation and hinted that Rosenthal may not remain in the closer role. This is great news for those Fantasy managers desperate for saves, as it looks like it will come down to Oh and Kevin Siegrist to take over ninth inning duties.

Personally, we believe Oh would be the right call. He has been phenomenal in his first season in North America, boasting a 1.66 ERA while striking out 51 batters in 38 innings. Oh’s four-seam fastball-slider duo has baffled MLB hitters, generating the second highest swinging strike percentage among relievers. Siegrist has also been fairly impressing, posting a 2.79 ERA and 9.93 K/9, but has also been extremely lucky with a .200 BABIP and 90.5 per cent strand rate.

Also, for what its worth, he is a southpaw and would hypothetically be better left in a setup/situational role. Pick up Oh now in all leagues, and let the saves rain down.

Pedro Alvarez, 1B/3B, Baltimore Orioles (ESPN: 9.4 per cent; CBS: 27 per cent): Over the past month, Alvarez is hitting .314 with six homers in 15 games. He should continue to see generous playing time against RHP.

Johnny Giavotella, 2B, Los Angeles Angels (ESPN: 5.9 per cent; CBS: 11 per cent): Giavotella is hitting .421 with one homer and only one strikeout over the last week. He recently hit out of the two hole against a LHP, which would be an intriguing trend with Mike Trout and Albert Pujols looming behind him.

Daniel Mengden, SP, Oakland Athletics (ESPN: 9.9 per cent; CBS: 39 per cent): Despite his 0-3 record, Mengden has pitched well since his promotion earlier this month. He is rocking a cool 3.00 ERA while recording 21 strikeouts in 18 innings.

By JB Branson
Tags: Josh Bell, Seung Hwan Oh, St. Louis Cardinals
This entry was posted on Sunday, June 26th, 2016 at 6:12 pm and is filed under BASEBALL, Jordan Branson, RotoRob. You can follow any responses to this entry through the RSS 2.0 feed. Both comments and pings are currently closed.